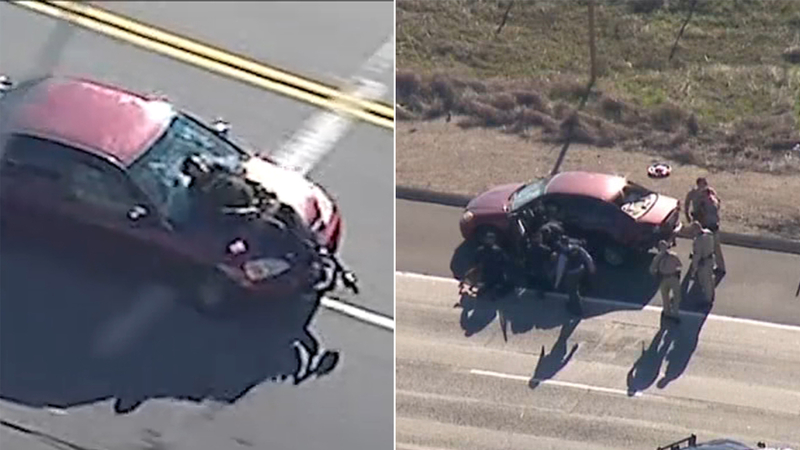 LOS ANGELES -- A chase suspect was taken into custody after running over a scooter rider during a chase that stretched from Los Angeles to San Diego County Thursday.

Culver City police chased the suspect, who authorities said failed to yield, on Washington Boulevard. The red, older-model Honda Civic had a cracked windshield and a hole in the rear window.

Authorities initially reported that the vehicle may have been stolen but later said it was not.

At one point, the suspect struck a pedestrian who was on a scooter and ran over the man. The suspect, later identified by authorities as Karl Flores, never stopped and continued driving.

Authorities said the victim's injuries were not life-threatening.

WARNING: THIS VIDEO MAY BE DISTURBING TO SOME VIEWERS


While driving, a police cruiser attempted a PIT maneuver that sent the vehicle spinning. Flores, who ended up facing the other direction, paused for a moment and then turned around to continue fleeing from police.

Soon after, another PIT maneuver was done, but Flores managed to turn around and flee again.

Moments later, a stronger PIT maneuver was attempted, but the driver fled again despite being partially boxed in. During that fourth attempt, the vehicle's bumper fell off and the suspect fled at high speeds.

The California Highway Patrol took over the wild chase at about 12:10 p.m..

Flores eventually pulled over on the southbound 5 Freeway in San Diego County around 1:30 p.m. after running out of gas, authorities said. Officers surrounded the car with their weapons drawn as the standoff continued.

Shortly after 2 p.m., Flores opened the car door, at which point, officers swarmed the vehicle. Authorities said a less-than-lethal shotgun was fired, and a bean bag hit the suspect in the face. CHP also released a K-9, who pulled the suspect further out of the car.

Flores was taken into custody and being treated for the bean bag wound to the face.