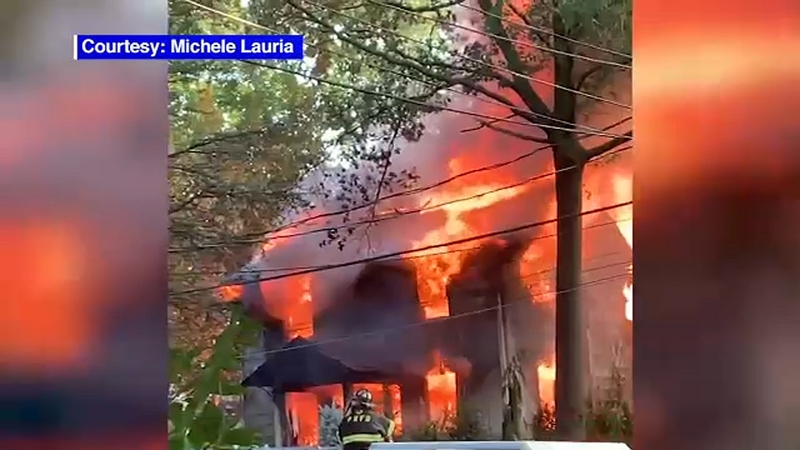 PORT WASHINGTON, Long Island (WABC) -- A man is being hailed a hero after rescuing his neighbor and a dog from their burning home on Long Island.

The raging fire quickly engulfed the house in Port Washington, trapping the victim inside. The old house stood on New Street for decades, but the flames destroyed it in minutes.

Onlookers stood as the fire raged, and someone looked panicked from an upstairs window of the home.

"He tried going back into the house and then came back and said 'there's no way out, there's too much smoke,'" said Good Samaritan Scott Trimarchi.

Trimarchi grabbed a ladder and helped the 30-year-old man and his hundred-pound German Shepard to safety.

"You could breathe the smoke in, and you could feel the flames everywhere," Trimarchi said, "it was just slow-motion - just go through the motions to get this guy out of his house, try not to panic, you know?"

Investigators believe the fire, which started around dinner time in the hilly area of Port Washington, consumed the home so quickly because of its old wood construction. By the time firefighters arrived, the homeowner would have been seriously hurt - or worse, if not for his neighbor.

"The way that fire was moving and the volume and intensity...it wouldn't have taken long," says James Hickman of the Nassau County Fire Marshal's Office.

"Thank God everyone's okay. I just hope he would do the same thing for me, like everyone else out there. Just do a good deed." Trimarchi said.

Officials say the victim is the son of the homeowner. He was taken to the hospital with minor injuries.