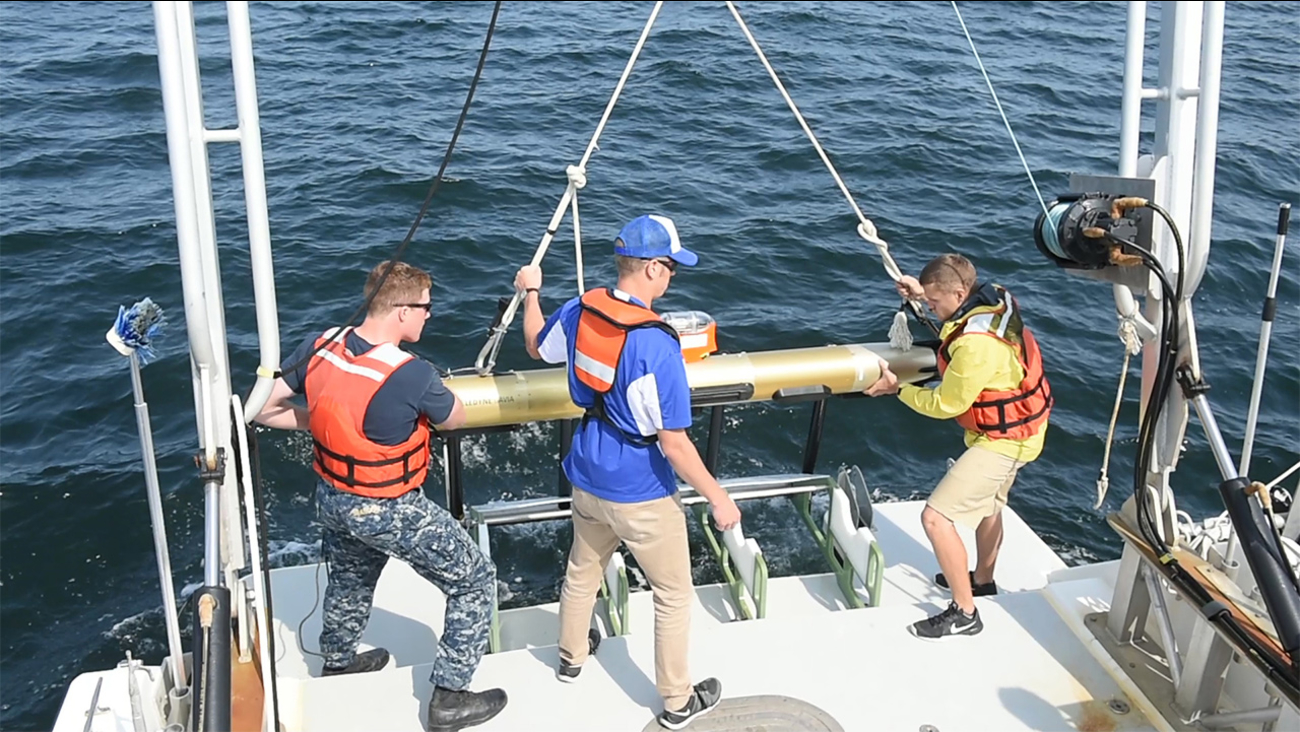 A team of Navy researchers descended on the waters around Fire Island this week to survey the wreck of the World War I U.S. Navy cruiser San Diego (ACR 6). (U.S. Navy)

LONG ISLAND (WABC) -- A team of Navy researchers descended on the waters around Fire Island this week to survey the wreck of the World War I U.S. Navy cruiser San Diego (ACR 6), on which six American Sailors lost their lives when she was sunk as a result of enemy action off the coast of Long Island on July 19, 1918.

The survey's objective is to assess the condition of the wreck site and determine if the ship, the only major warship lost by the United States in World War I, was sunk as a result of a German submarine-launched torpedo or mine. Ultimately, data gathered will help inform the management of the sunken military craft, which lies only a few miles south of Long Island.

The survey, led by the Naval History and Heritage Command's Underwater Archaeology Branch was performed in partnership with the Coastal Sediments, Hydrodynamics, and Engineering Laboratory (CSHEL) of the University of Delaware's (UD) College of Earth, Ocean, and Environment. Additional research support will be provided by the Naval Surface Warfare Center, Carderock Division (NSWCCD), and the Fire Island U.S. Coast Guard Station (USCGSFI) will provide essential logistical support.

Studying sunken military craft offers researchers a glimpse into the lives of the Sailors who served in them, as well as the Navy and the nation they served, said NHHC's Underwater Archaeology Branch Head Robert Neyland, Ph.D. We believe the modern remote sensing and interpretive tools at our disposal now will help our understanding of the site and maybe teach us something new about what caused San Diego to sink.

U.S. Coast Guard Station Fire Island served as the base of operations for the survey and provided essential logistical support to the expedition during underway days.

The survey will also help us fulfill a critical preservation part of our mission by assessing the site and determining how much damage has been done to the wreck in the past century by both natural environmental processes and unauthorized disturbance, Neyland said.

Six American Sailors lost their lives when San Diego sank, which is one of the reasons Neyland and his team believe safeguarding such wrecks is important: many of them serve as war graves. Additionally they may hold significant historical value, safeguard state secrets, or carry environmental or public safety hazards such as oil and ordnance.

The U.S. government takes any desecration of a war grave like San Diego, or unauthorized disturbance of any other sunken military craft very seriously. Whenever possible, the U.S. Navy works to enhance collaboration with partners including other U.S. government agencies, the recreational diving community and commercial fishing industry, as well as local authorities in areas where the wrecks are located to promote the preservation of these fragile historical and cultural resources. The wrecks are a testament to the sacrifice of the Sailors and Marines who served in them and their protection is part of NHHC's obligation to American Sailors to never forget their service and sacrifice.

Originally named USS California, the ship was renamed San Diego on Sept. 1, 1914, to bring the Navy into compliance with a policy of the time to reserve state names for battleships. By then the ship had been in service a little more than seven years after its commissioning Aug. 1, 1907.

Once commissioned, the ship became part of the 2d Division of the Pacific Fleet and took part in the naval review for the Secretary of the Navy at San Francisco in May 1908. Aside from a cruise to Hawaii and Samoa in the fall of 1908, the ship operated along the west coast, sharpening her readiness through training exercises and drills, until December, when she sailed for Honolulu, and in March 1912 continued "westward" for duty on the Asiatic station.

After this service, she returned home in August and was ordered to Corinto, Nicaragua which was embroiled in internal political disturbances. While there, the ship and crew protected American lives and property. She then resumed operations along the west coast cruising off California and keeping a watchful eye on Mexico, which, at that time, also suffered from political disturbance.

After being renamed in September 1914, San Diego intermittently served as flagship for the U.S. Pacific Fleet's commander-in-chief until an explosion in the No. 1 fire room put her in Mare Island Navy Yard in reduced commission through the summer. Two Sailors, Ensign Robert Webster Cary, Jr and Fireman Second Class Telesforo Trinidad, received Medals of Honor for actions to save their fellow crewmen during the fire that day. San Diego returned to duty as flagship through Feb. 12, 1917 when she went into reserve status until the U.S. entry into World War I. Placed in full commission that year, the cruiser operated as flagship for the commander of the U.S. Pacific Fleet's patrol force until July 18, when she was ordered to the Atlantic Fleet. Reaching Hampton Roads, Va. on Aug. 4, she joined Cruiser Division 2 serving as the flagship of the commander of the U.S. Atlantic Fleet's cruiser force

During her time in the Atlantic Fleet, San Diego's mission was the escort of convoys through the first dangerous leg of their passages to Europe. Based at Tompkinsville, N.Y., and Halifax, Nova Scotia, she operated in the weather-torn, submarine-infested North Atlantic, safely convoying all of her charges to the ocean escort.