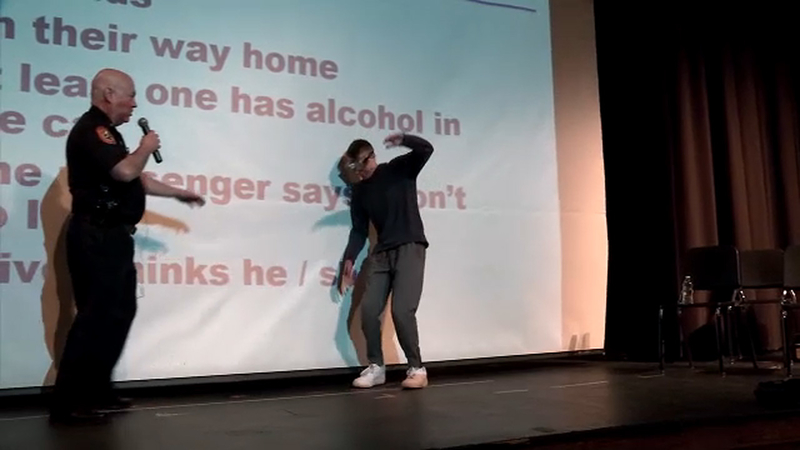 SYOSSET, Long Island (WABC) -- A group of Long Island high school juniors is taking part in a DWI education program this week, and the students are expected to get a good, hard dose of reality.

There were approximately 2,100 cases of driving under the influence last year alone in Nassau County, according prosecutors, and while the problem may not be on the rise, it is certainly evolving.

Nassau County District Attorney Madeline Singas, who runs the program called "Choices and Consequences," explains that concerns are growing due to texting and driving, but also due to the possibility of legalizing marijuana.

"In fact, it's shocking for us because kids tell us they can drive better when they're high as opposed to when they're drunk," she said. "So we have a lot of work to do."

At the program, at Syosset High School this week, there were several highly emotional moments. One of them included the police officer running a sobriety demonstration suddenly sharing stories of how drunk driving affected his own family.

The officer's brother was a repeat offender.

"They got a felony conviction on my brother, and in February of 2010, he went upstate, hard time," Nassau County police Lieutenant Gustave Kalin said.

Students also heard from one of last year's young DWI. defendants, 21-year-old Dietrich Pape, who was required to speak as part of his probation. He told the 11th graders of his arrest and time spent overnight in a jail cell.

"I've never been so terrified in my life," Pape said.

Students also saw video of a horrible wrong-way drunk driving crash on the Meadowbrook Parkway back in 2005 that killed two people, one of them beautiful 7-year-old flower girl Katie Flynn, who was decapitated.

There was also video with teens laughing about texting and driving who were then confronted by an innocent young woman partially paralyzed due to another driver's mistake. The teens in the video began sobbing.

None of this was lost on the high school juniors, many of them now taking driver's education at their school.

"You say it's not a big deal, and it is," junior Alisha Saluja said. "You can see how easily it can affect someone's life. I know I will not be texting and driving."