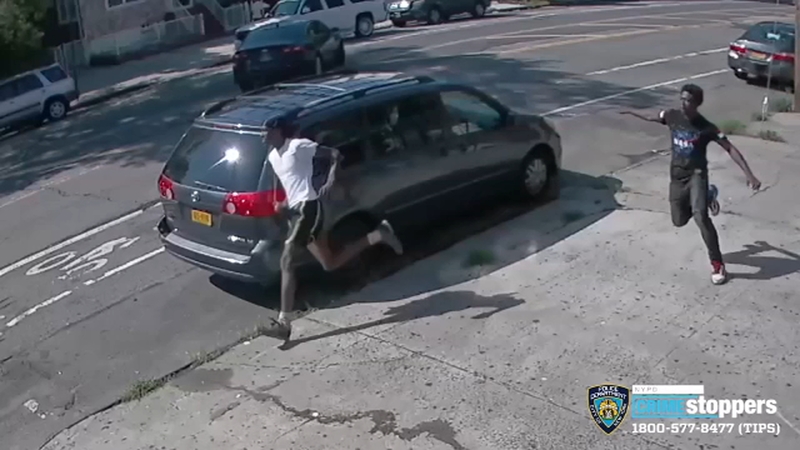 3 sought in more than 40 ride-share robberies across NYC

Authorities say the crime spree began on April 3 and involves the unidentified individuals requesting taxis through different rideshare services in the Bronx, Manhattan, and Brooklyn.

Upon gaining entry into the taxis, police say the suspects tell the drivers they wish to change destinations but that their phones are not working.

They request to use the driver's phone in order to input the new destinations, but instead, they access the driver's accounts and conduct unauthorized funds transfers to unknown accounts.

In several incidents, the suspects removed the drivers' phones by threat of force.

They then flee the vehicle.

One Bronx driver who did not want his name used said he picked up two passengers using the Uber app. They told him their phone was dead and asked if they could borrow his phone, saying it was an emergency.

They gave it back and he dropped them off, but then he checked his bank account and more than $220 had been stolen.

He thinks the suspects transferred money using the bank app on his phone. He didn't even report it to the police.

"These guys are making a few dollars an hour and they need to be on the road making that money," said Fernando Mateo of the Federation of Taxi Drivers. "They can't stop working to go and report a loss that they can recoup the same day."

Police say 40 drivers for Uber or Lyft have been scammed out of hundreds of dollars by the suspects.

"There's always gonna be people trying to get over," Lyft and Uber driver Porfirio Rodriguez said. "You just gotta be aware, When you're a driver, an Uber or Lyft, you're ready for this. You don't know who's getting in your car. You gotta be careful."

A written statement from Lyft reads in part: "Upon becoming aware of these incidents, we deactivated the passengers and reached out to the affected drivers to express our support."

The company says it is reminding its drivers to never allow anyone access to their Lyft account or cell phone and is reimbursing affected drivers.