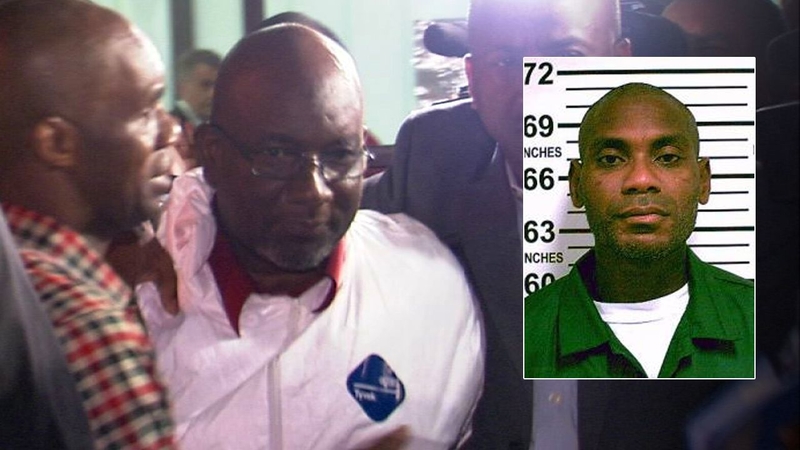 CLAREMONT, Bronx (WABC) -- Charges were dismissed Wednesday morning against a Bronx man in the fatal attack of a suspect who police say attempted to rape the man's wife.

The courtroom erupted in cheers when the judge accepted the dismissal of charges against Mamadou Diallo.

Diallo, 61, returned to court for the first time since an autopsy ruled the death of Earl Nash, 43, the accused attacker, as a homicide.

Prosecutors read a statement from Nash's family agreeing to the charges being dropped. When Judge Marc Whiten approved the arrangement, the courtroom erupted in celebration from Diallo family members.

Watch video from inside the courtroom showing what happened:
EMBED More News Videos

Watch court footage showing the district attorney ask for the charges to be dropped, and then cheers erupt in the courtroom.

"This case was a tragedy for all whose lives intersected in that Bronx building on the night of May 30, 2016," said Bronx District Attorney Darcel Clark.

"We waited for three months for the autopsy results, and after a thorough investigation as well as discussions with the deceased's family we have determined that no grand jury action is warranted,' Clark said. "We are dismissing the charges against Mamadou Diallo."

According to the New York City Police Department, Nash illegally entered Diallo's building, approached the 51-year-old woman, beat her with a chair and hit her in the head, causing bruises to her forehead before removing her clothes.

Diallo, police said, confronted the suspect in the sixth floor hallway and assaulted him with a tire iron. Nash was rushed in critical condition to Lincoln Hospital, where he later died.

Hours before the attack, Nash was spotted lurking in the hallway and elevator.

Diallo was charged with assault, but was released on his own recognizance in June.

On Aug. 26, the medical examiner ruled that Nash's death was caused by cardiorespiratory complications associated with blunt force trauma of the head, torso and upper extremities, acute cocaine intoxication and hypertensive and atherosclerotic cardiovascular disease.

Assistant District Attorney Jennifer Cruz read a statement from the Nash family in court that said in part, "We truly believe that both the Nash and the Diallo family have suffered a great deal of pain as a result of May 30, 2016....While we cannot undo the damage that was done that evening, we hope to bring some closure not only to our family but to the Diallo family as well. As such, we wholeheartedly recommend that District Attorney Clark dismiss all charges against Mamadou Diallo."
Related topics:
new york cityclaremont villagerapebronx newscourt casecharges dismissed
Copyright © 2022 WABC-TV. All Rights Reserved.
TOP STORIES
Supermarket employee arrested for attacking Rudy Giuliani inside store
4 injured in 4-vehicle crash on Belt Parkway in Queens
Family speaks out after grandmother killed in Brooklyn hit-and-run
AccuWeather Alert: Showers and Thunderstorms
7-year-old drowns in backyard pool in New Jersey
NYC Pride March held with renewed urgency after Roe V Wade overturned
Fireworks cause gunfire scare at NYC pride celebration
Show More
6 Long Island students rush to fight fire on graduation day
Firefighters among 11 injured in Brooklyn bike shop fire
Avalanche win Stanley Cup, beat Lightning 2-1
Broadway actors express concern over 'mask optional'
8-year-old among injured in 4 separate shootings in Brooklyn
More TOP STORIES News