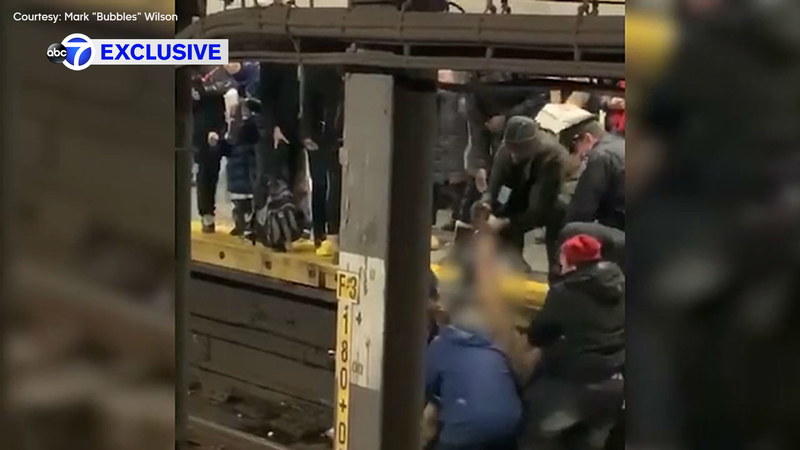 GRAND CONCOURSE, Bronx (WABC) -- The family of a man who was rescued from subway tracks in the Bronx on Thursday night is thanking the good Samaritans who helped save him.

It was chaos at the No. 2 train stop near Hostos Community College just after rush hour on Thursday, as a group of strangers struggled to save a disturbed man who did not want their help.

Authorities say 32-year-old Amari Peral was high and disoriented when he jumped on to the subway tracks and fought off the good Samaritans who risked their own lives to save him.

His family had no idea all this happened until Peral's older brother Amauri checked YouTube Friday morning and saw the Eyewitness News story from Thursday.

"I saw that video today and it broke my heart," Amauri Peral said.

One stranger struggled to get Amari Peral onto the platform, until two arriving officers lent a hand and yanked him to safety.

Another good Samaritan even stood over Peral on the active tracks to flag an oncoming train to stop.
EMBED More News Videos

New Yorkers came together and jumped into action to save a man's life at a subway station in NYC.

"I just want to say thank you to everybody that was on that platform that helped my brother," Amauri Peral said.

Amari's twin sister, Nelissa Peral, says that her brother lost his way as a teenager when he was prescribed pain pills after a car accident.

She says in the years since the accident, Amari spiraled into addiction and depression.

"When I saw him in the video, I knew that was him," Nelissa Peral said. "His legs, the way he moves, everything."

Officials say Amari Peral suffered a broken arm, but even more severe may have been his broken mind.

Nelissa Peral says when her brother arrived at Lincoln Hospital, he didn't even know his name or what he was doing on the train tracks.

"I owe you guys my life," Nelissa Peral said. "I want to give you guys a hug and let you know that you are truly appreciated."

The Peral family has been through a lot, but now they have hope thanks to the kindness and bravery of strangers who gave Amari Peral a second chance.