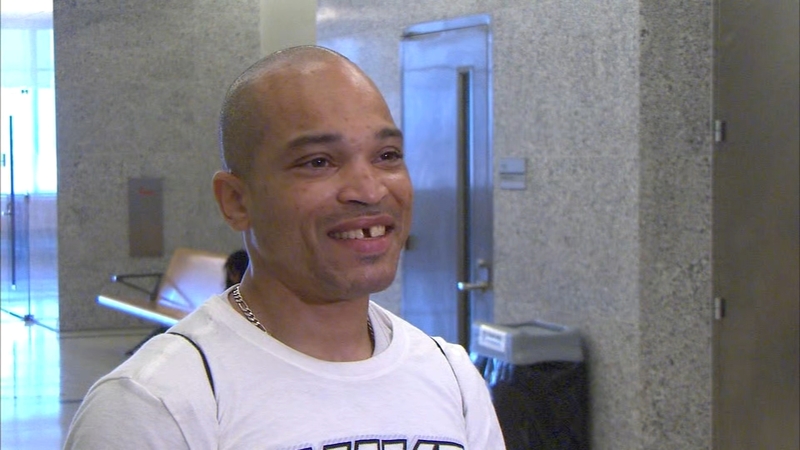 BROOKLYN, New York City (WABC) -- A man who served nearly 19 years in prison for firing at police officers on New Year's Day in 2000 had his conviction vacated Wednesday after a review found issues with the investigation.

Phillip Almeda, 42, who is now known as Kadafi Ala, who was incarcerated for for attempted aggravated assault on police officers before being paroled in 2018.

The investigation by the Conviction Review Unit (CRU) found that prosecutors ignored contradictions between the police officers' accounts and the ballistic evidence from the recovered gun.

"A reinvestigation of this case showed how confirmation bias can lead to a wrongful conviction," Brooklyn District Attorney Eric Gonzalez said. "Despite witness testimony that contradicted the ballistic evidence, this crime was presented to a jury as a 'simple case' and a man unjustly spent nearly two decades in prison. We are moving to vacate this conviction because our review of all the available evidence, including an expert's reexamination of the ballistics, has demonstrated that the defendant could not have committed the shooting as described at trial. This exoneration is yet another example of my CRU's continued commitment to correct miscarriages of justice without any fear or favor."

This is the 30th exoneration following a reinvestigation since the CRU was established in 2014.

The reinvestigation looked into the shooting that took place on January 1, 2000, at about 12:15 a.m. in front of 1320 Eastern Parkway in Crown Heights.

Four anti-crime police officers in plain clothes observed a 16-year-old male firing a revolver in the air and possibly towards them, returned fire in his direction, and saw him flee into the building. +

That teenager, whose gun was never found, was later charged and adjudicated as a youthful offender.

The officers' accounts of Almeda's actions varied. Two of them claimed that, as they responded to the gunfire, they saw him firing in their direction before emerging from a right-side courtyard.

Nobody was struck, and nine spent shell casings were recovered from the sidewalk.

The defendant, who was 20 at the time, was arrested immediately, and a gun was recovered from an adjacent courtyard.

Some of the officers alleged that he made inculpatory statements when apprehended.

Almeda was tried in February 2001, and the officers testified in accordance with the above-described accounts.

The defense presented a number of witnesses who knew the defendant and contended he did not possess a gun. They testified that a group of people were watching fireworks when the 16-year-old fired a revolver and a different person fired a semi-automatic weapon in the air, paused and fired again, before police responded and fired in his direction.

They said that no one returned fire towards the officers.

Almeda was acquitted of attempted murder and other counts but was convicted of three counts of attempted aggravated assault on a police officer and sentenced to three consecutive terms of seven years in prison.

The CRU reviewed documents, interviewed personnel involved in the investigation, and hired an independent expert who was provided with the weapon that was recovered after the shooting, a 9-mm Lugar semi-automatic pistol.

His report concluded that, based on the location of the shell casings and cartridges of the recovered gun, it was highly improbable that they came from the reported firing position of the defendant.

For all nine casings to end up on the sidewalk and none in the courtyard, all the casings would have had to bounce through shrubbery, a chain-link fence, and over a two-foot high brick wall, making it virtually impossible for the defendant to commit the shooting as described at trial.

The shooter was most likely standing on the sidewalk, the expert determined.

In addition, the gun was recovered just inside the gate of the left courtyard, and there was no plausible explanation as to how the defendant could have placed the gun there before being apprehended after emerging from behind the right courtyard.

Those issues were never explored before the jury at trial, and no forensic evidence linked the pistol to the defendant.

The CRU also concluded that the defense witnesses' testimony was more consistent with the ballistic evidence, unwittingly accounting for the location of the spent shells as well as the location of two unfired cartridges that were recovered from the sidewalk.

Finally, a review of police pretrial accounts that were recorded shortly after the incident uncovered inconsistencies with the inculpatory statements attributed to the defendant at trial, suggesting his post-apprehension statements were not accurately described to the jury.