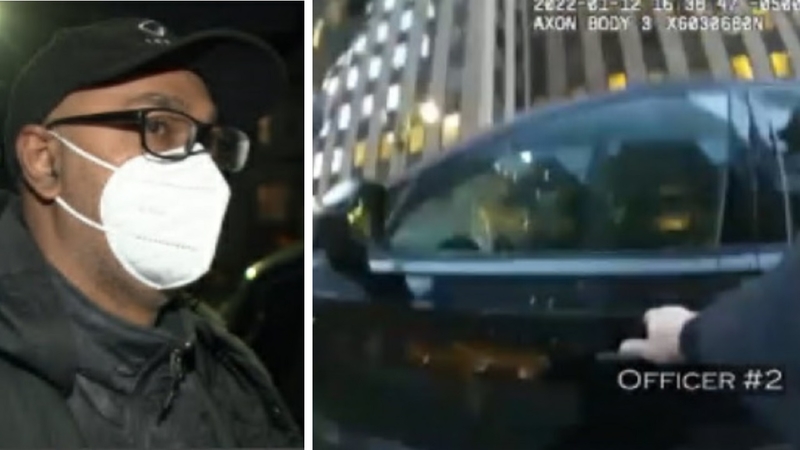 MIDTOWN, Manhattan (WABC) -- His Infiniti SUV is covered in scratches and caked in fingerprint dust. His mind is racing about his ordeal on Wednesday night.

"I feel safe doing it in Manhattan, always did. But now, it's questionable," he said.

It was just after dark on Wednesday on 36th between Broadway and Seventh Ave. While the longtime Uber driver waited for a passenger, a man came to the driver's window with a boxcutter in his hand.

"He took it out and showed it to me, and I pushed him back and he pushed it up towards my neck area, and I leaned back and I got out of the car and grabbed my phone, and he was like 'you cannot grab that phone, you cannot take your phone,'" said the Uber driver, "and I was like 'no, I'm taking my phone. You take the car, whatever.'"

The man then drove off.

Just 45 minutes earlier and a few blocks north, there was another carjacking. Police body cameras captured the confrontation between the two officers and the suspects who had used a taser to steal the car. The suspect took off with a sergeant in the passenger seat.

The suspect drove off, pushing another car out of the way and hitting everything in its path, coming to a rest against a median at 57th and Broadway, before jumping in the subway.

The sergeant who was along for the ride suffered minor injuries.

Police believe that after the suspect got on the subway, he went to Penn Station, where he would emerge onto 36th Street and carjack the Uber driver's Infiniti.

"Just hope they catch these people doing these things - it's really sad," said the Uber driver.

The driver has bills to pay, so he says he will be back on the road Friday with the carjacker still at large.