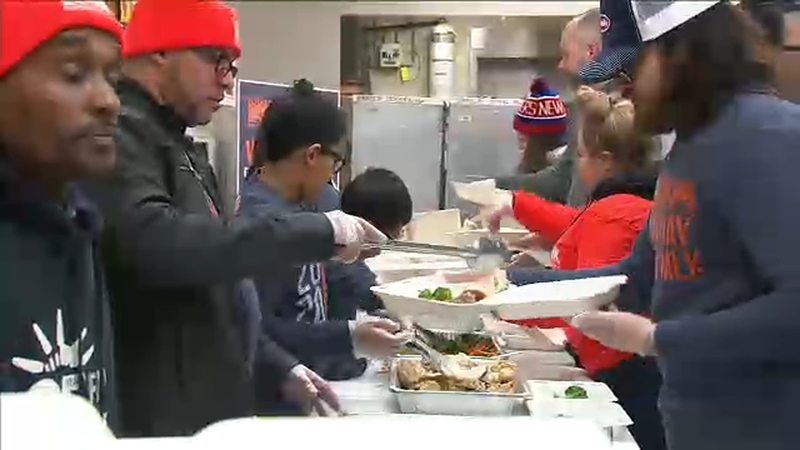 NEW YORK (WABC) -- Officials and residents are paying tribute to Dr. Martin Luther King, Jr. during events in New York City and around the country Monday as the nation observes the federal holiday named in his honor.

The Food Bank for NYC hosted its annual "Done In A Day For MLK," with volunteers preparing, cooking, serving and distributing 1,500 meals for the Harlem and Bronx communities, as well as preparing and repacking food items to be distributed across the five boroughs.

The events were held at the Food Bank for NYC's two main facilities, the Community Kitchen & Food Pantry on West 116th Street in Manhattan and the Food Bank For NYC's Warehouse on Food Center Drive in the Bronx.

"In New Jersey, we are proud to continue Martin Luther King, Jr.'s fight for justice," Murphy said. "We are deeply committed to ensuring fairness and justice in our criminal justice system, and today we are taking critical steps to ensure the scales of justice work equally for all New Jerseyans."

The American Red Cross and the City of Newark participated in an MLK Day of Service event, with volunteers going door to door in Newark's West Ward, installing free smoke alarms and providing fire safety information.

In Staten Island, Manhattan, and Queens, people spent the morning volunteering during a day of service in Dr. King's honor. They worked to make city parks greener, cleaner, and healthier environments for all to enjoy.

Eighth-graders at Manhattan Country School gathered at the Harriet Tubman Memorial in Harlem to demand "equity now," the theme of this year's march commemorating Dr. King, and Bay Ridge for Social Justice held a day of educational events at the Fourth Avenue Presbyterian Church in Brooklyn focusing on community safety and conflict resolution.

The Big Onion held a walking tour of Harlem, with stops including the Abyssinian Baptist Church.

The Museum of the City of New York held a scavenger hunt for children to teach them about Dr. King's role in the civil rights movement, and there is also an ongoing exhibit called "Activist New York."

The Brooklyn Society for Ethical Culture is also holding an event for children and parents, with artist Moses Ogunleye giving a drawing lesson highlight the art and culture of Africa. Dancers from the company JungleDom were also performing.

Around the country, Democratic presidential contenders celebrated the Martin Luther King Jr. holiday and his legacy with parishioners at a Baptist church, where Bernie Sanders and Elizabeth Warren engaged in the handshake that didn't happen in the frosty aftermath of the last debate.

"This is THE handshake," presidential contender Tulsi Gabbard said as Sanders and Warren reached across her to shake hands in the front row of Zion Baptist Church. They and rival Amy Klobuchar attended the service before they joined Joe Biden, Pete Buttigieg and other contenders in a crowd of tens of thousands marching to the Statehouse.

Many of the candidates in the wide field planned to travel to Des Moines, Iowa, on Monday for the Brown and Black Forum, recognized as one of the nation's oldest minority-focused presidential candidate events of its kind. Traditionally a debate, the event in recent years has been more of a one-on-one candidate forum.

Former New York Mayor Mike Bloomberg, who is not competing in the early-voting states but has put some of his multimillion-dollar ad spending there - planned to join a King Day parade in Little Rock, Arkansas. Tech businessman Andrew Yang is in the midst of a 17-day bus tour of Iowa and plans to remain there.