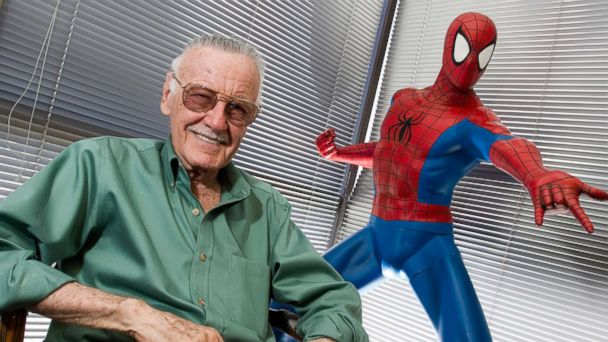 Stan Lee, former editor-in-chief of Marvel Comics and the creator of beloved characters including Spider-Man, Iron Man, X-Men, and more, has died, ABC News has confirmed.

An attorney for the Lee family, Kirk E. Schenck, said that Lee "did pass away this morning in Los Angeles."

"Stan Lee was as extraordinary as the characters he created. A super hero in his own right to Marvel fans around the world, Stan had the power to inspire, to entertain, and to connect," said Bob Iger, chairman and CEO of The Walt Disney Company. "The scale of his imagination was only exceeded by the size of his heart."

Lee was an innovator and his work with Marvel Comics was groundbreaking, no more so than as in recent years with movies dominating the box offices involving his most prized characters such as Spider-Man, The Avengers and X-Men.

The New York City native was born Stanley Martin Lieber in 1922 to Celia and Jack Lieber, and said that as a child, he loved to read, though he wasn't particularly interested into comic books. However, in the late 1930s and early 1940s, he got a job as an assistant at Timely Comics, which would eventually become Marvel Comics. Lee's duties included proofreading, refilling ink for the artists and other remedial duties, he once said in an interview.

In 1941, he made his comic debut writing a Captain America book, and used the pseudonym "Stan Lee" for the first time. But it wasn't until late 1950s when Lee struck out on his own, creating superheroes for what is now Marvel Comics, and giving them human flaws, something that hadn't been seen in the comic realm.

Before Lee, heroes like Superman in competitor DC Comics were nearly perfect and didn't have the same concerns as ordinary people. Lee changed that with characters like Spider-Man, who debuted in 1962. Peter Parker, Spider-Man's alter ego, was a lonely high school student, and one with whom readers could identify. Other characters created by Lee during this time include the Fantastic Four, The Avengers, Iron Man and the Incredible Hulk.

But it was always Parker with whom Lee said he related to most.

Timely Comics became Marvel in the early 1960s. Lee would serve as Marvel's editor-in-chief until 1972, when he became publisher. His books tackled the news of the day, including politics and the Vietnam War, also something not really touched on in comics before. Lee helped to create comics' first mainstream black superhero in 1966 with Black Panther and brought awareness to teen drug use with Spider-Man books in the 1970s. He also created strong female superheroes like She-Hulk, always drawing influence from his beloved wife Joan Clayton Boocock Lee, to whom he was married for more than 60 years before her death last year.

"She inspired me," he told the Huffington Post in 2012. "Because I've spent most of my life with such a beautiful, talented, challenging female, I feel I've gained, and am still gaining, a great deal of knowledge about the feminine mystique and about personal relationships."

Though he became more of a figurehead in later years, Lee, who developed the catchphrase, ""Excelsior!" also became a cult icon. Starting in 1989, he made one of his first cameos in "The Trial of the Incredible Hulk," and he went on to be featured in every Marvel movie following 2000s "X-Men," including "Spider-Man" in 2002, the "Fantastic Four" and "Iron Man" in 2008.

In 2010, a movie was made about his life, "With Great Power: The Stan Lee Story." It featured actors Kenneth Branagh, Nicolas Cage, Michael Chiklis and Kirsten Dunst, among others. He also received many honors throughout his career: In 1994, he was inducted into the Will Eisner Award Hall of Fame and the next year, the Jack Kirby Hall of Fame. In 2008, he was awarded a National Medal of Arts, and last summer, he was named a Disney Legend and immortalized his hands, feet and signature in cement at the TCL Chinese Theatre in Hollywood.

"I'd like to be remembered as a guy who provided some entertainment for people, and who enjoyed doing it," he told the Archive of American Television in 2004. "I'm not a guy who thinks much really of posterity or how I'm remembered, because you know I've never believed in this building, this business of building statues for people, cause once you're gone you don't know about it. I mean, once I'm not here anymore it's not going to matter to me if I'm remembered or not. I'd like to be remembered while I'm alive, that would be nice."

Lee is survived by his daughter, J.C.