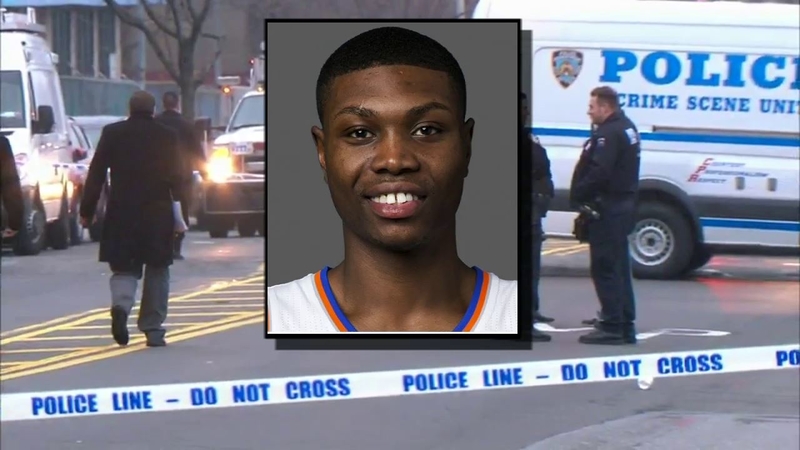 MASPETH, Queens (WABC) -- A New York Knicks player was shot in the leg during a robbery after leaving a Queens strip club early Wednesday.

Cleanthony Early, 24, had just left CityScapes Gentlemen's Club on 58th Street in Maspeth around 4:30 a.m. Police say he got into an Uber car, which was then cut off by three other vehicles, and up to six men wearing ski masks then jumped out and committed the robbery, police said.

Detectives have surveillance video showing the three vehicles boxing in the Uber car at one red light, The Uber driver got away once, but couldn't escape when they did it a second time.

The group demanded his jewelry, including a large gold necklace and the gold caps on his teeth, worth about $9,000, according to police. They also stole his cellphone and cash before fleeing the scene. At some point during the hold up, Early was shot once in the right knee cap. He is in stable condition.

A woman who was with Early and the Uber driver were not injured.

Pounding on doors one by one desperately begging for help, surveillance video captured Early stumbling down a Maspeth, Queens, street early Wednesday morning just moments after he was robbed and shot leaving the strip club.

Thank you all for your Thoughts and Prayer I appreciate you all! Shout out to you beautiful souls for caring, God works in Mysterious way!

Early is a second-year forward who has played for the New York Knicks and their NBA Development League team, the Westchester Knicks. He is on the Knicks roster, playing in six games this year. He is originally from the Bronx, but moved to Middletown.

Early played about 30 seconds Tuesday night in the Knicks 108-96 victory over the Detroit Pistons at Madison Square Garden.

The Knicks organization released a statement about the robbery: "We are aware of what occurred with Cleanthony Early this morning and are relived that he is not in a life-threatening situation. We will not comment any further until we receive more information.

"We talked to our guys about the situation, just reminded them how serious this is and that there are certain things that come with being visible in terms of being a public figure," he said.

He told them: "Continue to try to be as vigilant and as careful as you can knowing that you can't always avoid other people's choices."

"Guys are sensitive to the situation and take it very seriously. Very concerned about their teammate, their friend and their brother," Fisher said.

Teammate Carmelo Anthony said he didn't think Early had purposefully put himself in a dangerous situation, and he described Early as "humble" and "a guy who stays to himself."

"I heard the news this morning when I woke up, through text. It was a shocking situation, an unfortunate situation for Clee, his family, for us as an organization, but most importantly just him and his family. For his mom to have to wake up to that call, no parent should have to go through that," Anthony said.

The theft comes about 10 days after Knicks forward Derrick Williams was robbed of $617,000 in jewelry after he had taken home two women from a Manhattan club. No arrests have been made in either incident.

Anthony said he wouldn't go so far as to say the Knicks were being targeted.

The cases raise questions about whether NBA players should have a curfew like other professional sports. In April, Indiana Pacers forward Chris Copeland, his girlfriend and another woman were stabbed following a late-night argument on a street near a Manhattan nightclub.

Fisher was asked about the curfew policy Wednesday but said he'd "maybe" revisit it at another time.

"It obviously raises our concern and our level of awareness that we ought to have," he said.