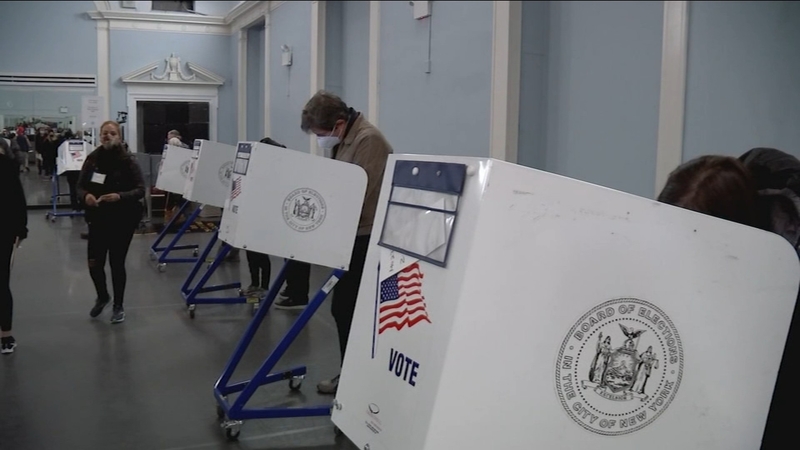 Early voting was popular in October ahead of the presidential election, and lines often got very long.

The City's Board Of Elections website now has a wait time map for early voting locations, and you can find yours by typing in your address.

Early voting locations may differ from your polling place, so it is important to check before you go.

The new tabulated ranked-choice voting is complicated -- meaning it could be July before we actually know who won the race for the Democratic nomination.

The race is heating up after the five frontrunners met for another debate on Thursday evening.

It was far less heated than the first time the candidates met, though the hot topic was still on increasing crime in the city.

Each candidate shared their theories on why they are the best person to tackle the problem, and most of the candidates also spent time attacking Brooklyn Borough President Eric Adams about his residency after it was found he was frequently crossing the George Washington Bridge.

Adams insists he lives in Brooklyn, even spending nights in Borough Hall during the pandemic last year.

After giving a tour of his home in Bedford Stuyvesant on Wednesday, Adams released EZ-Pass records showing he went to New Jersey to visit his girlfriend only seven times in the last year.

Mayor Bill de Blasio has not endorsed a candidate and said he he will forgo early voting and cast his ballot on Primary Day on June 22.

One debate remains before voters head to the polls, and with ranked choice voting in place, it's anyone's guess who will come out on top.

Attorney and activist Maya Wiley, former counsel to de Blasio, has leap-frogged into second place and continues to take aim at Adams.

But on Friday, the leading progressive candidate faced significant blowback after suggesting she might try to take guns away from cops.

When the topic was raised, all the other candidates said no. But when pressed several times, Wiley said she's not prepared to make that decision in a debate.

"And an attorney, because she is an attorney, states that she didn't' understand the question or that it was a misleading question," Adams said. "I understood it. It was simple. Are you going to take guns from cops? That's a yes or no."

Wiley seemed to have a more definitive answer the day after.

"All I said was what I was going to do as mayor," she said. "First of all, let's be clear. Of course we are not going to take guns from police officers."

She attempted to clean up any confusion while also accusing Adams of distracting because she wants reform and that he's the "law and order" candidate.

"Eric Adams is the candidate that has been calling for more guns," she said. "He's the candidate who thinks there should be carrying guns into churches."

Adams said the real issue is crime, and that if New Yorkers don't feel safe, we will never have an economic recovery.

"No one is riding the trains to go into a corporate America if they feel unsafe, that they're going to be pushed on to the subway tracks or be slashed because we have a mental health crisis in our subway system," he said. "That's what this is about."