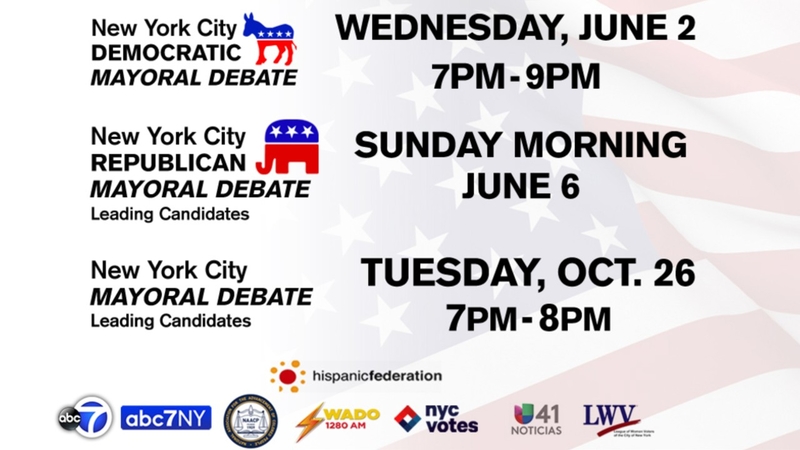 WABC-TV to host 3 mayoral debates ahead of NYC election

NEW YORK CITY (WABC) -- WABC-TV will be hosting two New York City mayoral debates ahead of the June 22 primary, as well as the final debate before the general election on November 2.

The WABC debates will be co-hosted by the League of Women Voters of NYC, Univision 41 Nueva York / WADO-AM, Hispanic Federation, and NAACP NYS Conference.

"The 2021 elections will provide us with the opportunity to impact our local communities in a direct and meaningful way," said Crystal Joseph, Vice President of Communications at the League of Women Voters of New York City. "And with the inception of Ranked Choice Voting, voters can truly vote louder; so, let's make it happen New York."

The primary will be the city's first to be determined by ranked choice voting, in which voters can choose several candidates and rank them in order of preference.

"The NAACP New York State Conference Metropolitan Council is excited to partner on the 2021 NYC debates to help educate voters throughout our communities going into the rapidly approaching primary election," said Hazel Dukes, President, NAACP NYS Conference. "This year understanding the process and the new Ranked Choice Voting method is essential to the continuing work of improving the City of New York. We look forward to engaging voters in this crucial election season."

The NYC Campaign Finance Board has administered debates for every citywide election since 1997. The debates are a key component of the the organization's nonpartisan voter engagement initiative, NYC Votes.

"Hispanic Federation is proud to have been selected as an official sponsor of the New York City mayoral debates," said Frankie Miranda, President of the Hispanic Federation. "Through our civic engagement efforts, we continue to mobilize, engage and inform Latino voters on the importance of participating in all elections while providing them with the tools and resources necessary to cast an informed ballot. In 2020 alone, HF engaged with over 300,000 Latino voters in the city. This partnership with the NYCCFB, ABC, Univision, the League of Women Voters, and the NAACP is a continuation of that work. We are committed to ensuring that Hispanic voters across NYC understand the newly-implemented Ranked Choice Voting method; and that our community is engaged in a culturally competent manner during one of the largest municipal elections in New York City history."

Here is the full debate schedule:

In addition to the television partners listed above, each debate will be simulcast on NYC Media. Specific details on how to tune-in will be included in media advisories released prior to each debate.

"New York City is home to the largest Latino community in the country, and it is vital that they get the information needed to make an informed decision during one of the most pivotal mayoral races in our city's history," said Roberto Yañez, President and General Manager of Univision New York. "Informing and empowering our community is part of our core mission at Univision New York, and we are proud to provide the 2.5 million Hispanics residing in NYC's five boroughs an in-depth look at this year's candidates through our multiplatform coverage."

City law calls for two debates to be held per election (primary and general election), per citywide office (mayor, comptroller, and public advocate). If only one candidate qualifies for a debate, that debate is not held. Candidates participating in the city's matching funds program must participate in each debate for which they have met objective, nonpartisan eligibility criteria.

NYC Votes is the nonpartisan voter engagement initiative of the New York City Campaign Finance Board and its Voter Assistance Advisory Committee. In addition to promoting voter registration, participation, and civic engagement in New York City through its many programs and partnerships, NYC Votes sponsors the city's official Debate Program and produces the citywide Voter Guide.