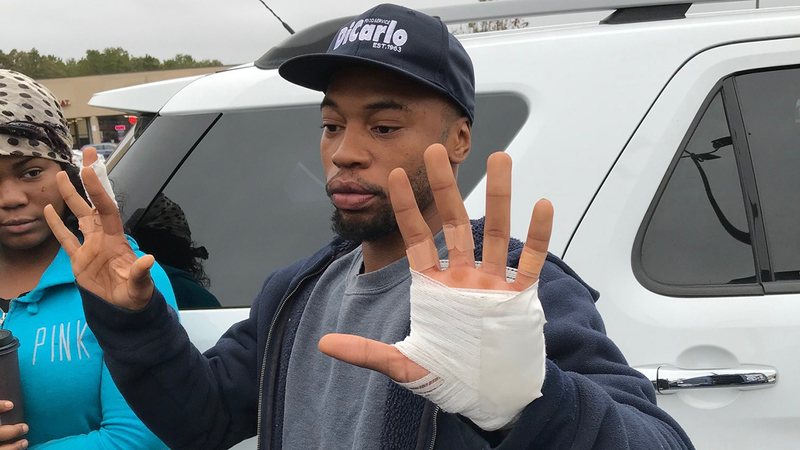 MEDFORD, Long Island (WABC) -- An employee and two good Samaritans turned the tables on a would-be robber at a Long Island Dunkin Donuts when the armed man entered a location in Medford Monday evening and demanded money.

After the suspect, 61-year-old Frank Annunziata, Jr., allegedly slashed a worker at the Horseblock Road business, they fought back, motivated by the chant "Get outta my Dunkin."

"I said, 'No, you gotta get outta my Dunkin,'" employee Austin Minott said.

And that became the battle cry as Minott began wrestling Annunziata to the ground.

"He called me the N-word," Minott said. "So we get outside, he starts really stabbing me with the knife."

Meanwhile, two other terrified employees were in the store. Vicky Marciano is only 17, and she ran and hid in the freezer.

"It would be embarrassing if one of them died instead of me," Minott said. "Come on, I wasn't gonna have that."

Minott was stabbed on both his hands and he had fallen to the ground. Things weren't looking so good, and then his older brother Leslie Treadwell showed up at the right time.

Treadwell just happened to stop by the store at that critical moment.

He jumped into action, and a second good Samaritan who is a regular customer helped Treadwell hold the suspect down until police arrived.

"We don't advise it or encourage it, but it was certainly very helpful for the good Samaritans that stepped in and helped the employee," Suffolk County police Detective Lieutenant Sean Beran said.

Minott said he lost his little brother to gun violence last month, and he is just grateful to be alive. And Marciano is equally as grateful, for Minott.

"I'm so glad he's OK, because he's my favorite person to work with," she said.

Annunziata, who has a long list of prior arrests, is now charged with attempted robbery and assault.