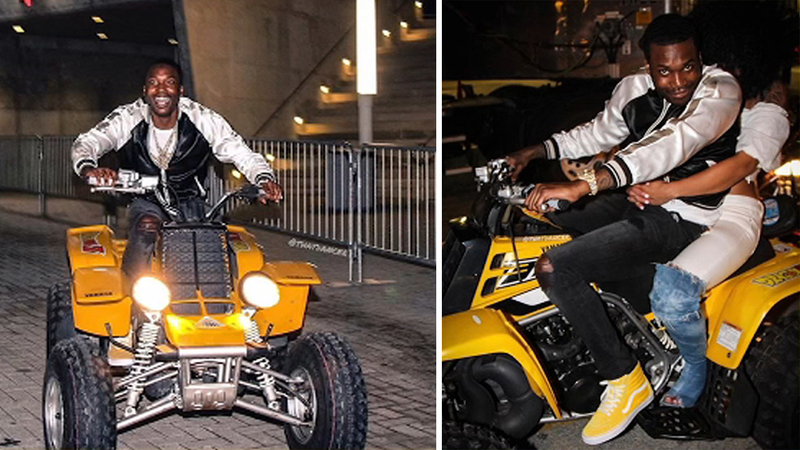 INWOOD, Manhattan (WABC) -- Rapper Meek Mill was arrested one day after allegedly popping wheelies and generally driving recklessly in New York City, police said, in an area where community leaders claim their streets are overrun by off road vehicles.

The 30-year-old rapper, whose real name is Robert Rihmeek Williams, was charged with being part of a group reported to be driving motorcycles and ATVs recklessly Wednesday night in Inwood.

A 911 call brought police to the intersection of West 207th Street and Sherman Avenue at about 8:23 p.m. Wednesday, but by the time officers arrived, the group had driven away.

Investigators were later made aware of video on social media showing Meek Mill doing wheelies on his dirt bike, which he was riding without a helmet, as part of the group.

He was arrested Thursday at around 10:15 p.m. following his appearance on the Jimmy Fallon show, during a charity event in Inwood. Instagram video reposted by fans purports to be a live stream of police taking him into custody.

Mill was charged with reckless endangerment, but he arrived at court too late Thursday night to be arraigned. He was held overnight, appeared before a judge Friday, and was released on his own recognizance on reduced charges.

"I ain't here in New York to commit no criminal activities," he said after his release. I came to help the hospital kids play basketball, and that was that."

"That video was sent out to 1 Police Plaza for analysis, which they rarely do in any case, let alone, traffic infractions," he said. "He was clearly singled out because he's a rapper, he's a celebrity. He's a young African American who has been very successful in this industry, and maybe members of law enforcement don't like it."

He also criticized the NYPD for a huge police presence when they arrested him within view of kids at the charity basketball game.

"Meek at first thought that they were approaching him to help escort him out of the crowd," Tacopina said. "And he said, 'No, I'm OK.' And he didn't realize he was being arrested."

Meanwhile, Meek Mill is just glad his long night is over.

Others believed to be driving recklessly in the group with Meek Mill are still being sought.

The dirt bike he was alleged to have been riding was not immediately located by police.

The Inwood neighborhood has been the site of frequent community complaints of ATVs and other off road vehicles driving recklessly on the streets.

Earlier this week, police released video of an ATV driver on the sidewalk on West 206th Street, just blocks from the Meek Mill incident. When police stopped the driver, he bit an officer's forearm and fled. He has since been caught.

During a targeted crackdown on ATVs and dirt bikes last year, the NYPD seized more than 1,600 vehicles and many were crushed in a public event.