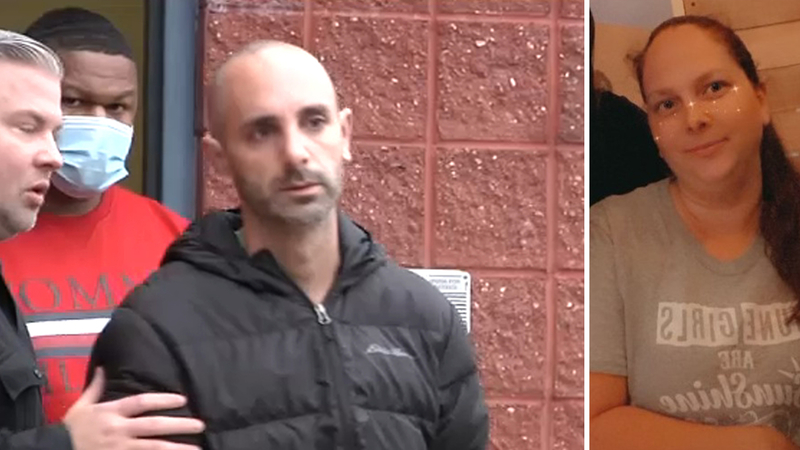 CENTEREACH, Long Island (WABC) -- The body of a missing Centereach woman was found in Middle Island and now her husband is under arrest.

Prosecutors revealed some horrific details about what has been learned so far about the way the 38-year-old mother of four was killed, and how he allegedly planned it for weeks if not longer.

Melissa Molinari had been reported missing December 2 by a friend, but no one had actually seen her since November 21, and police believe she was killed only a couple of days later.

A search of 43-year-old Marcello Molinari's phone revealed GPS data showing he'd been to the Rocky Point Pine Barrens State Forest in Middle Island on the morning of November 23.

That is where her body was found Thursday.

Authorities say she'd been stabbed roughly 20 times in the torso, and they believe this happened in the couple's basement.

A search turned up blood and other evidence.

"We're working under the theory that the house is the crime scene, the car was used to transport her, and she was placed in the Pine Barrens," said Set. Lt. Kevin Beyrer with Suffolk County police.

As to the motive, prosecutors say in early November the family cut a trip to Disney World short because he learned she was having an extramarital affair.

Prosecutors say the plotting began at that point with internet searches on his phone looking for places from which he would not be extradited.

Police say he told them he and his wife had an argument the day before and she packed up and left with an unknown man in an unknown car, leaving him and the couple's four children.

"He claims she called him from an unknown number on Thanksgiving and told him to cook dinner," Beyrer said.

His attorney spoke with Eyewitness News briefly saying all of this is news to his client.

"The charges were here at the courthouse, the first time he was given an attorney was here at the courthouse," said defense attorney Christopher Gioe. "He's informed me that he has asked for an attorney from the beginning of this investigation and he was denied the entire time. There's certainly going to be an investigation conducted by the defense in this case and we're certainly going to proceed forward with a trial in this manner."

Police say they spoke with the person she had that relationship with and he claims it was over in early November.

Molinari did not enter a plea at the initial appearance and was ordered held without bail.

The four children, ages 4 to 17, have been placed with a family friend for now. The prosecutor noted they have been left without a parent this holiday season.

The case gained attention when Gabby Petito's father took to Twitter to ask his followers to help find Molinari.