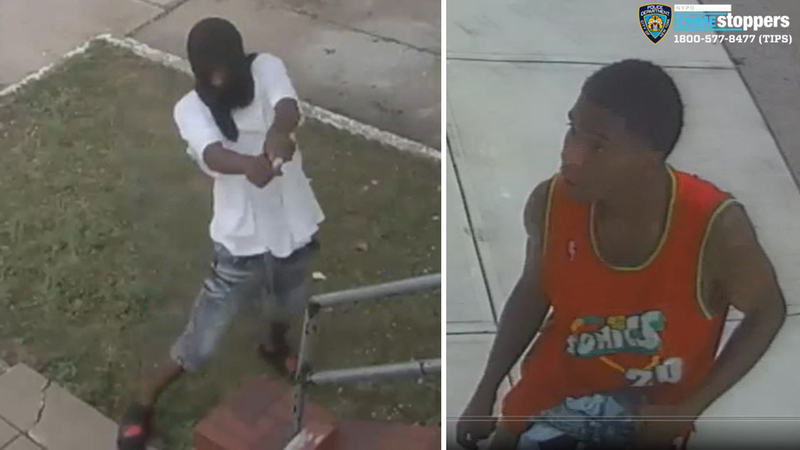 New video wanted for menacing mother with gun in Queens

JAMAICA, Queens (WABC) -- A gun-waving suspect was caught on camera in Queens attempting to shoot a woman in a seemingly random attack, and authorities are hoping the surveillance video will lead to an arrest.

Police released even more video of the suspect Tuesday morning.

The terrifying incident happened just before 7 p.m. Friday in front of a residence in the vicinity of 109th Street and 109th Avenue in Jamaica.

Authorities say the gunman approached the 45-year-old female victim, displayed a handgun and attempted to discharge it at her.
EMBED More News Videos

The woman, who did not want to be identified, spoke exclusively with Eyewitness News, saying she had just come home from work and was talking with her next door neighbor when they noticed the stranger pacing back and forth and clearly looking odd with a shirt over his head.

She said she noticed that his pocket was bulky, and then he pulled out gun. He didn't say a word but was becoming visibly frustrated that the gun wouldn't fire.

She says she was convinced she was going to get shot, and she grabbed her bag in an effort to shield herself.

"I used my bag," she said. "If the bullet should come flying, I was going to basically use the bag as a defense, trying to see if I could go in the direction and dodge the bullet."

She said she also tried to convince him not to shoot her.

She doesn't think the man wanted to rob her because he never went for her bag.

"You could have seen the frustration in his eyes, wanting to know why the gun wasn't going off," she said. "He looked me in the eyes, and after he tried to crank it a second time, he pulled the trigger thinking this is it and he got frustrated."

Police say the victim did not know the man and believe this is a random act, but the woman said she was the victim of a home break-in back in April and that she thinks it may be the same person.

She says she is not scared because she has faith in God, but her children are frightened.

The family has a large dog they say scared off the burglar in the break-in.

He is described as a black male, last seen wearing a white shirt, blue jean shorts, black socks, and black "Nike" slides. He also had a black shirt wrapped around his head.