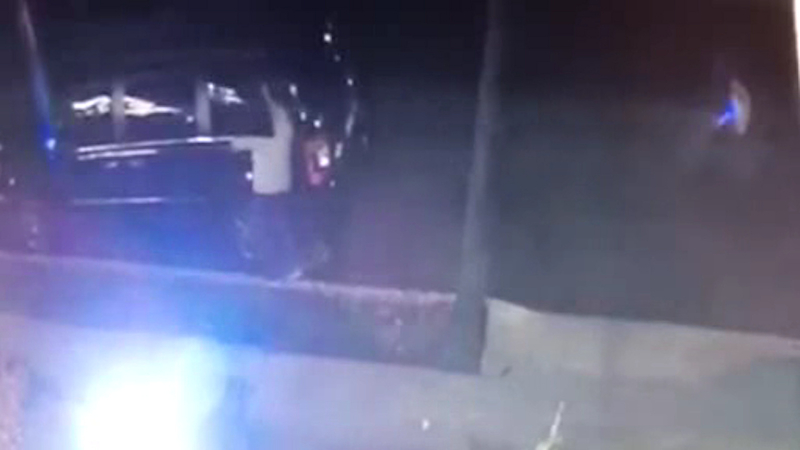 Search for suspect in string of minivan breakins

A thief is targeting minivans, at least 16 in the past month in the West Brighton neighborhood, ripping off valuable items left inside.

Pretty much everything about a minivan is designed for convenience, right down to the little side vent in the back that gives you extra air.

But in this small section of Staten Island, someone has figured out a way to exploit this feature by literally yanking the windows off the vans to get in and steal what he can.

A surveillance video shows a man in a hoodie on a mission. The mission is getting inside a minivan.

He is seen walking back and forth, casing the block. Then, he appears to put on a pair of gloves before, in one practiced motion; he yanks open the pop-out rear window and jumps in.

Sometime later, out he comes, with the owner's purse.

What looks like the same man is seen doing it again to a different minivan.

He rummaged around inside and grabbed a pair of sunglasses, before slithering out, and walking away.

"I'm mad, yeah. I'm mad and I feel violated," said Christina Sanger, theft victim. "He really stuck a deep rooted nerve. Our whole block is kind of unsettled about this."

Sanger emerged the next day to find her glasses gone, along with $400 in damage to the window mechanism on her Chrysler Town and Country, as word spread through the neighborhood of cars like hers targeted in the exact same way.

In fact in just the past month, in this section of Staten Island alone cops logged 16 similar cases, involving this very make and model.

"He's clearly got his eye on this car. There's no doubt in my mind," Sanger said.

"Without breaking the glass," a Chrysler spokesman told Eyewitness News, "Access cannot be gained as the video indicates if the window vent is properly closed. Fiat Chrysler urges all motorists to ensure their vehicles are secure. Every Fiat Chrysler vehicle meets or exceeds all federal standards."

"The next day I went to the other window and gave it a little tug and said hmm, I could do that," Sanger said.

Sanger insists her window had been properly closed. She doesn't know what else she could have done.

It's important to point out that Chrysler is not the only company that makes a minivan with a window like this. The NYPD is still looking into whether this burglar has his other makes and models. In the meantime, they say keep your valuables out of sight and most important, if you recognize the guy in that video, call police.
Related topics:
west brightonnew york citytheftcaught on camerasurveillance video
Copyright © 2022 WABC-TV. All Rights Reserved.
TOP STORIES
Official says police made 'wrong decision' during TX shooting
Massacre survivor says gunman told them: 'You're all gonna die'
Thunderstorms on the way; Bethpage Air Show cancels practice session
Accuweather Alert: Warmer and humid, strong storms later
Bank employees help kidnapped woman after she asks for loan
16-year-old arrested after social media threat to shoot up NY school
Explosion rocks neighborhood near Philadelphia, 4 confirmed dead
Show More
NYC offices could be half-filled by September, business group says
Jersey Shore, businesses prep for busy Memorial Day weekend
NYC beaches officially open to swimmers this Memorial Day weekend
Memorial Day weekend: More drivers despite high Tri-State gas prices
Judge dismisses Trump's lawsuit, allowing NY probe to go on
More TOP STORIES News