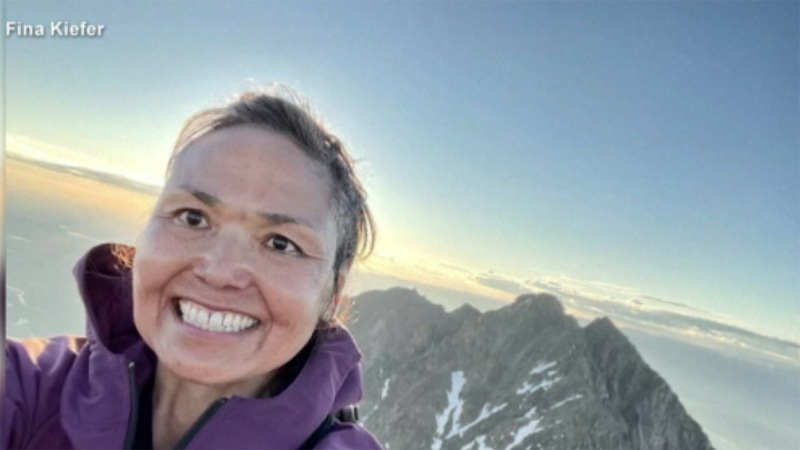 PALMER, Alaska -- An Alaska hiker whose whereabouts were unknown for nearly two days after she reported being chased off a trail by bears was found alive Wednesday evening, officials said.

Fina Kiefer, 55, of Palmer, Alaska, emerged from the woods and was spotted on a road about a mile from the Pioneer Ridge trailhead. Kiefer was injured and was transported by ambulance to a local hospital for evaluation, according to statements from the Alaska State Troopers as well as Alaska's National Guard.

State troopers were notified on Tuesday around 1:29 a.m. local time that Kiefer was alone and in need of assistance on Pioneer Ridge Trail near Palmer, about 42 miles northeast of Anchorage. Kiefer had called her husband asking for help after she said she was charged by multiple bears and had to use bear spray. But she stopped responding to telephone calls and text messages shortly thereafter, according to officials.

"She was chased off the trail by bears and couldn't find it again," Senior Master Sgt. Evan Budd, superintendent of the Alaska Rescue Coordination Center and full-time member of the Alaska Air National Guard, said in a statement Wednesday.

A search was launched, with state troopers enlisting the help of volunteers and Alaska's National Guard. Teams with dogs on the ground scoured the 13.6-mile trail and the surrounding area for any signs of Kiefer, while crews in helicopters looked from above. But after more than 35 hours, they found no evidence of the missing hiker and had to call off their efforts as weather conditions deteriorated, according to officials.

Then, a volunteer who was leaving the search area saw Kiefer as they were driving on Knik River Road and notified state troopers on Wednesday at around 5:30 p.m. local time. Kiefer had hiked down the mountain, and her injuries were believed to have been caused by a fall while she was on the descent, according to officials. Kiefer's condition and the extent of her injuries were not immediately known.

Kiefer told officials that she had seen the helicopters overhead but they couldn't see her, according to Budd.

"It's easy to see and hear an aircraft in the sky, but can be very challenging to spot a person at night under canopy," he said.

In addition to carrying bear spray, she had waterproof matches and was able to start a fire on Tuesday night to keep warm. Budd said being prepared for the unexpected is "critical" when hiking in Alaska.