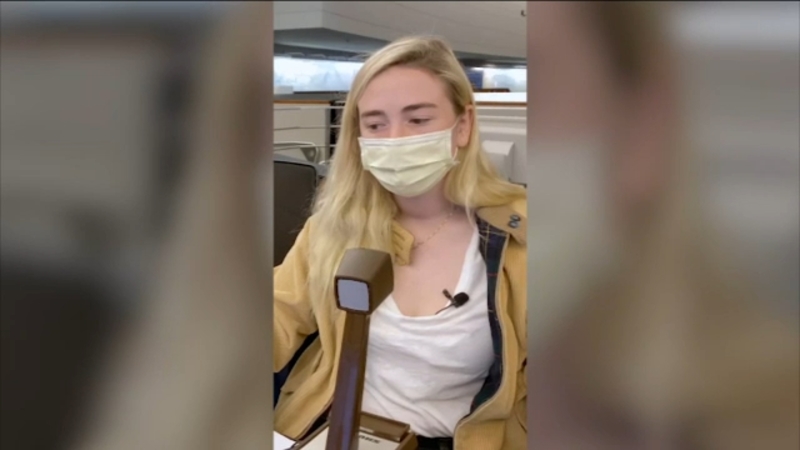 Comic invited to make own recordings after subway impersonation

GREENWICH VILLAGE, Manhattan (WABC) -- A comedian who went viral on TikTok for impersonating the famed New York City subway announcements was invited by the MTA to make her own recordings.

Molly Clark, 23, got to hear herself on the subway for the first time Wednesday afternoon.

"That's just bizarre, but I really love it," she said.

The NYU grad's journey from the West Village to the city's mass transit system began when she imitated Charlie Pellett, New York City's famous subway voice, saying "Stand clear of the closing doors please" as a joke while in an elevator.

It was also a form of exposure therapy, a mock scenario, she said, after she once passed out while riding on a packed train and was terrified to step foot back on the subway.

"I had never experienced claustrophobia, so I had this weird experience," she said. "And I am simulating in the elevator, and I did the subway voice because I don't think you realize it, but that voice is actually calming."

Related: You've seen his work before, now an NYC street artist is revealing his identity

She posted it on social media and it went viral, catching Pellett's attention.

He sent Clark a message, telling her he was "delighted and honored" and that the imitation "made me laugh out loud."

"I'm like what in the world, I thought it was a robot," she said. "Didn't think it was really people."

She made another TikTok that also went viral, and the MTA took notice, offering her a visit to its headquarters and giving her the opportunity to voice her own message for the subways.

"It's like NASA," she said. "You feel like it's the space station. This is controlling all of New York and makes you feel really safe."

Clark had been out of town but returned recently, hearing her recording for the first time in the subway in Greenwich Village.

"Honestly I think my grandmother was more excited because she lives in New York," she said. "My parents are like, what the heck? They're very proud. How could you not be?"