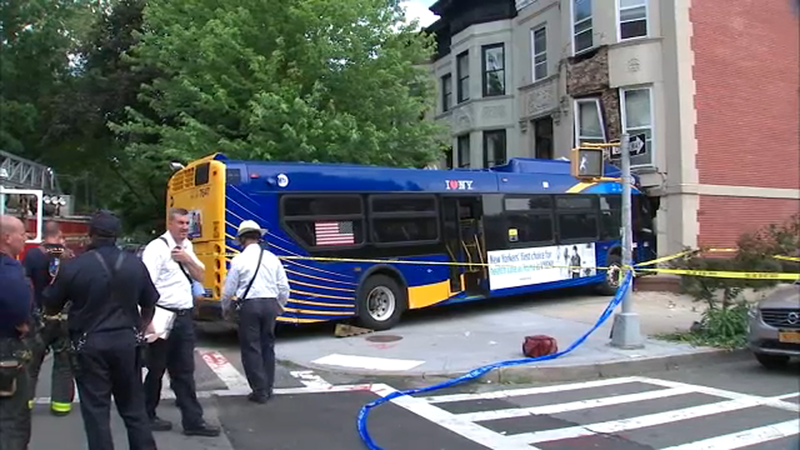 PROSPECT LEFFERTS GARDENS, Brooklyn (WABC) -- At least sixteen people were injured when an MTA bus lost control and jumped a curb, crashing into a building in Brooklyn on Monday afternoon.

The crash was reported at an apartment building on 174 Lincoln Road just before 2 p.m.

MTA says 14 people in total were on the bus at the time of the incident: 13 passengers and one bus operator.

The FDNY said all of the injuries were said to be non-life-threatening. Thirteen of the victims were transported to the hospital with minor injuries.

The B49 bus was traveling southbound on Bedford Avenue when the driver lost control, the bus jumped a curb and crashed into the unoccupied building.

"Most of the patients were ambulatory meaning they self-evacuated from the bus, or they were assisted off by the fire department members," said FDNY Deputy Chief James Smithwick. "We went through the building to make sure they were nobody trapped inside under the debris, and we and we told everybody they had to evacuate the building and they were just taking out through regular arrangement. Nobody was taken out on ladders or anything."

President of MTA Bus, Craig Cipriano, said the 55-year-old driver, who has been on the job for 13 years, is doing fine and wasn't seriously injured. He has no major safety record -- only minor collisions.

"The investigation is ongoing, but it doesn't appear to be any kind of mechanical defect that caused this incident," Cipriano said.

MTA officials said at this point, it also doesn't appear that speed was a factor in the crash.

When asked about reports of the driver's foot being stuck on the accelerator, Cipriano said they are going to look at that in the investigation.

Inspectors and engineers with the Department of Buildings said the structural stability of the building was compromised and the building is no longer safe to occupy.

All residents in the building have been offered emergency relocation assistance and structural engineers have been issued emergency work orders that must be performed so the bus can be removed.