In wake of terror attacks, New York City steps up outreach to Muslims 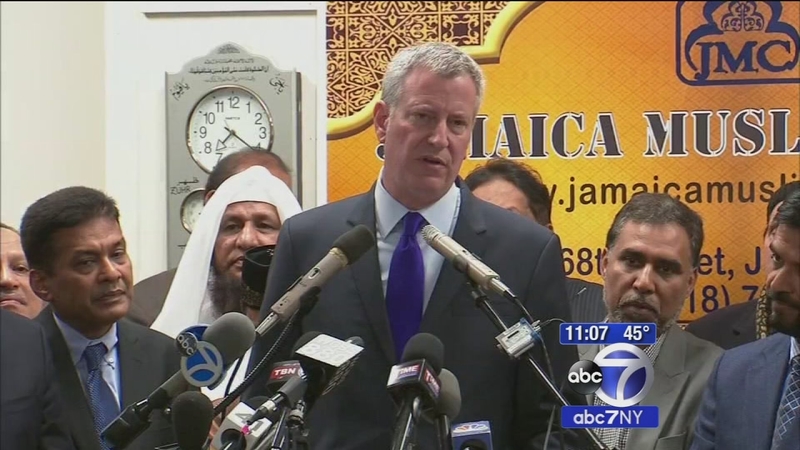 NEW YORK (WABC) -- In the aftermath of last month's Paris attacks, New York City officials have bolstered security and quietly stepped up outreach to Muslim residents, trying to calm fears of hate-filled retaliation and mend a relationship that has been fraught with mutual suspicion.

The city has increased its presence in Muslim neighborhoods, sending staffers to visit mosques and meet with imams and worshippers. Police officials have briefed community leaders on new counterterrorism procedures.

Muslim-Americans in Queens say they see the anti-Muslim attacks on social media and they say it feels like they're being wrongly blamed.

They say it was an important step to see Mayor Bill de Blasio out there.

This is the most high-profile outreach effort to this community by his administration since the Paris attacks and the shooting in San Bernardino.

Mayor Bill de Blasio spoke to a group of about 100 worshippers who packed into the Jamaica Muslim Center.

Some even had to watch the mayor in an overflow room next door.

Mayor de Blasio assured those listening that their community matters.

The mayor made a veiled reference to the NYPD conducting surveillance in Muslim communities after the September 11th attacks.

Last year, amid complaints of religious and racial profiling, the NYPD disbanded that surveillance team.

Mayor de Blasio is now trying to mend the relationship.

Community leaders say his visit is a step in the right direction.

"We are all concerned about the current events happening so once again he came here and assured us that we are equal in the eyes of the law," said Mohammed Akhter Hussain, of the Jamaica Muslim Center.

The NYPD has 900 Muslim officers and is using its Community Affairs Bureau to treat the Muslim community as an ally in the fight against terror.

Some teenagers say the majority of Muslims are peaceful law-abiding people, but they see a lot of anti-Muslim rhetoric on social media and it hurts.

"As a human being, I feel really upset about this. It kind of makes me angry inside," Nur Lalikham said.

"Our prophet taught us to never spread hate. So the first thing I do is maybe, they just don't know what's right. And if they do really hate us, the last thing I can do is hate them back," Yasin Ehsan said.

City officials have urged Muslims to report any hate crimes.

The NYPD says the number of hate crimes is sharply lower this year compared to this time a year ago.