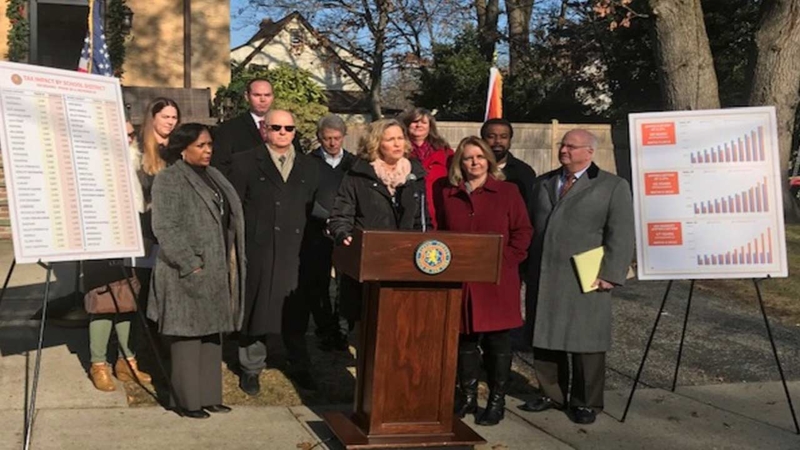 "I understand the anger expressed by homeowners," Curran said. "Those with increased taxes don't want increases. Those with decreases ask why they were overpaying for eight years. I am angry that taxpayers are forced into this position."

More than 40 percent of homeowners will see a reduction in their property taxes, according to the county. Curran has said it's part of her effort to fix the "corrupt" tax assessment system that has been in place for nearly a decade.

Homeowner Karen Higgins, of Massapequa Park, said her taxes are going down under the new assessment.

"I didn't realize that over the past few years, I've been overpaying," she said. "So I'm one of the fortunate ones who will be getting a reduction."

"We all know that there are going to be some bumps along the way and some people are truly going to be hurting," Legislator Debra Mule (D-Freeport) said. "However, that's not a reason not to do it."

Curran does not have the support of the entire Nassau County Legislature, and she called Tuesday for members to get behind her plan.

"It's time for them to get on board and make sure all of our taxpayers are protected," she said.

Legislator Delia DeRiggi-Whitton (D-Glen Cove) said she supports Curran's efforts to fix a "neglected" tax assessment system, but she said it's happening too quickly and the Legislature should be allowed to take at least one year to make sure the reassessments are accurate.

"I'm very much in support of fixing the problem," DeRiggi-Whitton said. "I don't like the way it's been rolled out. I think there's been a lot of confusion."

Under the plan, the taxes will go into effect during the 2020-2021 fiscal year, with residents receiving their first tax bills in October 2020.

Curran is trying to get the New York State Legislature to agree to a five-year transition period that would allow homeowners whose taxes will go up time to grieve or prepare financially.

A five-year transition period would also mean those homeowners whose taxes would go down would not see the financial relief for five years.