A man sits with a child on his lap as victims of Saturday's earthquake, wait for ambulances after being evacuated at the airport in Kathmandu, Nepal, Monday, April 27, 2015. (Altaf Qadri)

Aid workers still face "immense logistical challenges," U.N. humanitarian chief Valerie Amos said Friday, noting that the scale of the devastation in Nepal would be an obstacle for any government.

The U.N. has estimated the magnitude-7.8 quake that struck April 25 affected 8.1 million people - more than a fourth of Nepal's population of 27.8 million.

In Kathmandu, rescue workers in orange jumpsuits continued to search through collapsed buildings, but fewer tents were standing in a central part of the capital that had been packed with people in the first few days. Some residents who had been fearful of aftershocks have left the city or moved elsewhere.

The government announced it was giving the equivalent of $1,000 to families of each person killed and another $400 for funeral costs, state-run Nepal Radio said Friday.

More than 130,000 houses were destroyed in the quake, according to the U.N. humanitarian office. Near the epicenter, north of Kathmandu, whole villages were in ruins, and residents were in desperate need of temporary shelters against the rain and cold.

Isolated hamlets are still cut off because scarce helicopters can't land in some mountainous areas, and roads have often been destroyed, said Amos, who flew over some of those places during a three-day visit.

"Of course we are worried that it is taking so long to get to people who desperately need aid. Some of those villages are virtually flattened. But it's very, very hard to see how we're going to get to them," she said.

Some villagers might be able to walk to a place where the aid helicopters could land, but that would be of little help to those who are injured, she added.

Tents and tarpaulins are the most urgent need, but there's also a demand for water, food, health care and better sanitation. Debris must be removed, bodies recovered, and officials need to determine which buildings are too dangerous to enter, Amos said.

In the past 48 hours, the U.N. Children's Fund, or UNICEF, has delivered nearly 30 metric tons of supplies, including tents, water purification tablets and first aid and hygiene kits.

Nepal Information Minister Minedra Risal said 400,000 tents are needed immediately, but that the country has only been able to provide 29,000 thus far.

In addition to tents and tarpaulins, the government appealed to international donors to send foodstuffs like grain, salt and sugar. 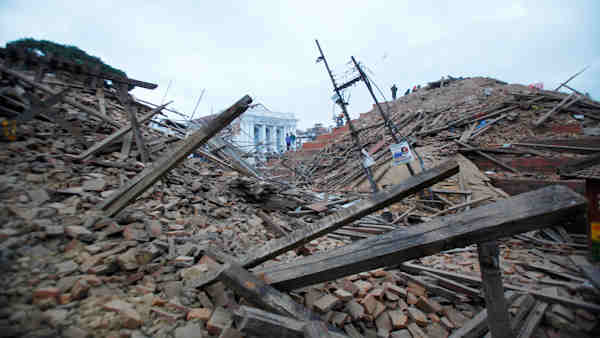 "We have received things like tuna fish and mayonnaise. What good are those things for us?" Finance Minister Ram Sharan Mahat told reporters.

Krishna Maharjan, a farmer on the outskirts of Kathmandu, brought green onions and cauliflower on his bicycle into the city.

"We are trying to get as much fresh food to the people as possible," he said. "I feel it is our small contribution. But that's what we can do and every little bit helps."

The death toll from the quake has climbed to 6,260, police said, including those killed in an avalanche on Mount Everest.

A European Union official said about 1,000 people from Europe still were unaccounted for and had not contacted their embassies since the quake struck.

EU Ambassador to Nepal Rensje Teerink said that "doesn't mean they are dead. It just means they haven't reported back." Most were tourists and trekkers, and many did not register with their embassies.

While the U.N. humanitarian office said about 24,000 people are living in 13 camps in Kathmandu, a sense emerged that life was starting to return to normal in the capital in some semblance.

Only a few dozen tents remained at the Tudikhel grounds in the heart of the city, with less than 1,000 people still there. Earlier in the week, the area had been crowded with more than 30,000 people.

Almost all the city's gas stations were open Friday, and they had no lines. A popular suburban bakery even was selling fresh bread and croissants.

And at a field hospital set up by the Israeli military, a baby girl was born Friday to a young Nepalese couple.

Lata Chand, 19, and her husband, Hariender, had rushed out of their home when the quake hit. While their house was undamaged, the hospital where she was to give birth was forced to close.

"When the quake struck, I was thinking 'Will we survive?' because most of the pregnant women miscarried their babies. I was scared it would happen to us," Hariender Chand said. "Now we're safe, it's good."

Both the mother and the still-unnamed child were doing well. Beaming midwife Dganit Gery said she hoped the birth would show all Nepalese women that there is hope for the future.