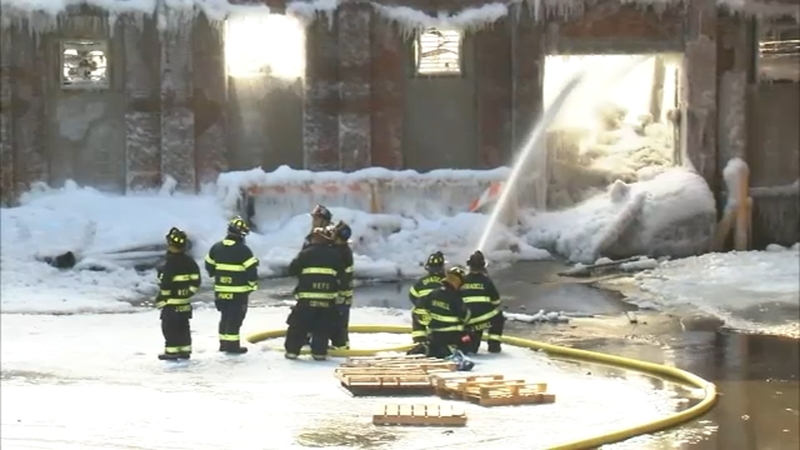 PASSAIC, New Jersey (WABC) -- Firefighters in New Jersey are still trying to determine what caused a massive fire in Passaic on Friday night.

Hundreds of firefighters battled the 11-alarm blaze in an industrial complex where flames shot 70 feet into the air.

The fire was just a few feet away from igniting the Qualco Chemical Plant which was filled with potentially hazardous materials such as chlorine. Officials say the heroic efforts by firefighters stopped the flames from hitting the chemical plant, which averted a disaster.
The fire was finally put out on Saturday, but they had to come back to put out hot spots that flared up through the weekend.

A massive chemical fire broke out at a warehouse in New Jersey on Friday.

Fire officials are looking at the possibility that the fire might have begun in the back or upper floors of the location. They put in a heroic effort to prevent what could have been one of the worst disasters around.
Two hundred firefighters braved the roaring fire, the danger of an explosion, and freezing cold temperatures to stay on top of the fire. The fire raged into Saturday because all the fuel in the building fed it.

Residents living nearby were ordered to keep their windows closed and the air quality was being monitored along with the water supply in the city.

Officials are commending the fire department in Passaic and from the other immediate areas for responding and keeping this blaze under control and not allowing it to spread.

"First and foremost, I give our profuse thanks to every single firefighter who arrived at the scene to assist in battling the blaze and containing it. This fire could have been a lot worse had they not contained it as it has been. We know one firefighter was injured and more than a dozen required medical attention, and we are grateful that everyone appears to be in good condition," Governor Phil Murphy said.
ALSO READ | Task force unveils policy recommendations in wake of Bronx fire that killed 17
EMBED More News Videos

Congressman Ritchie Torres announced he would be crafting legislation to help address the root causes of the Bronx fire that killed 17 people. N.J. Burkett has more.