"I'm not a bad person. I'm not this person that they're out here trying to make me seem like," Weinman said.
WPVI 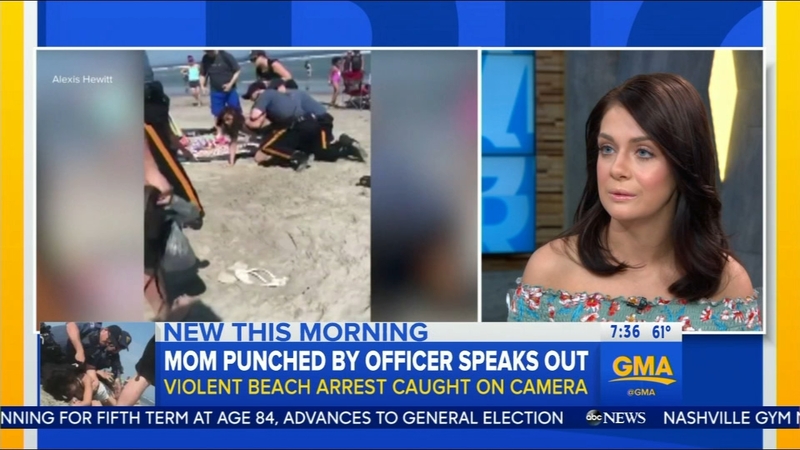 WILDWOOD, N.J. -- The young Philadelphia mother who was accused of underage drinking and seen on on video being punched by a police officer in Wildwood, New Jersey spoke out Wednesday on 'Good Morning America' for the first time since the incident.

Twenty-year-old Emily Weinman says she was with her 1-year-old daughter at the beach on Memorial Day Weekend when she was approached by Wildwood officers for suspicion of underage drinking.

Police say Weinman was seen with an open bottle of alcohol. Weinman says there was alcohol on the beach, but it was sealed.

Weinman says she cooperated with police, but after giving two breathalyzer tests which she says came back negative, the officers would not leave.

"It just escalated to that point to where they wanted to lock me up because I wouldn't give them my name because I did everything they said to do," Weinman said.

She says 'something in her gut' told her not to give the officers her name. Though she is on probation for 2016 arrest, she says that had nothing to do with refusing to give her name.

Police bodycam footage and video shot by a beachgoer were released of the incident, showing the confrontation between Weinman and police.

Watch the full video released by police showing the incident between officers and the 20-year-old woman.

The beachgoer's video showed an officer punching Weinman twice in the head as she was prone on the sand, her legs flailing. Wildwood officials have said the videos show the woman assaulted the officers first, while her lawyer Stephen Dicht has said police overreacted.

Weinman says she hurt her back and neck in the violent arrest.

She was charged with resisting arrest, aggravated assault, and assaulting a police officer by spitting. She says she did not strike the officer when he went to handcuff her, as police have claimed. She is not sure about the kicking claim.

"If anything, that was after the fact, after I got attacked by the officer," Weinman said.

As for the spitting accusation, Weinman says she got sand in her mouth during the altercation.

"When he smashed my head into the ground, I got sand in my mouth. So when they got me on my stomach, after I was struggling trying to defend myself, I spit the sand out of my mouth which made it look like I was spitting at the officer. That wasn't the case. It definitely wasn't my attention at all," Weinman said.

On GMA, Dicht said the charges escalated only after the bystander video was released.

"The Saturday she was taken into custody, she was in custody for about 40 minutes, she was charged with misdemeanors. After the bystander video came out and started getting attention, that's when they charged her with the aggravated assault," Dicht said.

Weinman says she's been very anxious over the attention she's been receiving because of the videos. She says she is upset over what people have been saying about her.

"They see one video, one situation, and saying all this negative stuff about a person. But one situation doesn't define someone. I'm not a bad person. I'm not this person that they're out here trying to make me seem like," Weinman said.

On Tuesday, prosecutors said the officers involved in the violent arrest, who were temporary summer hires, won't face any criminal charges.

Cape May County Prosecutor Jeffrey Sutherland said the decision was made after his office completed a preliminary investigation that involved reviewing the bodycam video and the bystander's video, as well as statements from several independent witnesses and other related material.

In statement, Sutherland said, "As County Prosecutor, I recognize that the video footage has raised a lot of questions regarding the officers' actions. A decision such as this is not based on emotion; it is based upon applying the proper laws, policies and directives that govern law enforcement."

The Wildwood Police Department's Internal Affairs Unit is now conducting an administrative investigation into the incident.