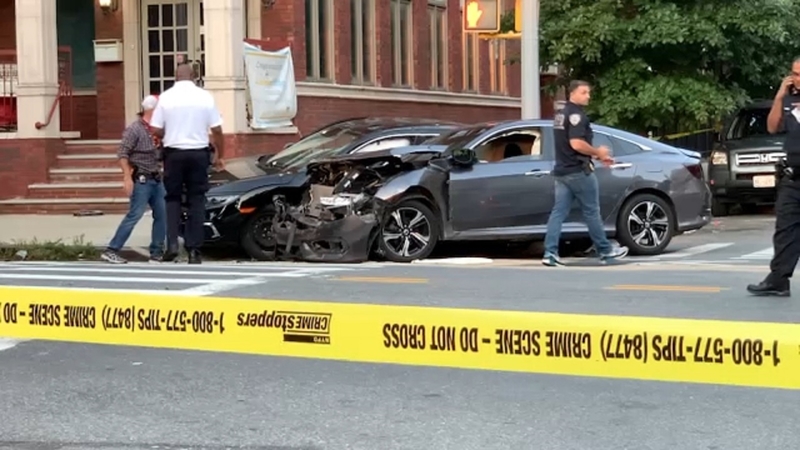 CLINTON HILL, Brooklyn (WABC) -- A man is facing attempted robbery and other charges following a hit-and-run crash that killed a three-month-old girl and critically injured her mother in Brooklyn Saturday.

Officials said a 2017 Honda Civic with two men inside was traveling in the wrong direction on Gates Avenue in the Clinton Hill section around 6:30 p.m.

The Civic hit a second vehicle near Vanderbilt Avenue and the crash sent that second vehicle careening towards the sidewalk where the 33-year-old mother and the father were walking with their daughter in a stroller.

"My cousin heard the impact and we went to the window and we heard huge screams of 'oh my God,' and then there was a woman lying down on the floor," witness Anne Sophie Plume said. "We thought that it was a hit-and-run because there was just running everywhere. So we knew it was serious, it was pretty horrible."

The father's piercing cries for help for his baby is something another witness tells Eyewitness News, he'll never forget.

"He was frantic going back and forth with the baby in his arms, the baby was limp, he didn't know what to do -- just so devastated by it. Obviously, you can't imagine something like that happening," witness Mike Hill said.

The three-month-old baby was pronounced dead at Brooklyn Hospital Center while her mother is in critical condition at New York - Presbyterian Brooklyn Methodist Hospital.

A 36-year-old man was also struck and taken to Brooklyn Hospital.

Mott, the driver of the Civic was taken into custody and charged, but police are still searching for another suspect that was also in the car.

A 49-year-old woman was driving the second vehicle, she was also taken to the hospital, but wasn't serious injured and she won't be facing charges in the crash.

Police say the attempted robbery charge against Mott happened after the initial crash.

They say Mott attempted to steal another vehicle to evade police at the scene right after the crash.

Police say Mott has not been charged yet for the baby's death.

The fatal hit-an-run capped off a deadly weekend in which a total of six people were killed in crashes and at least five others were injured.

"We're furious and heartbroken by the deadly and daily occurrence of traffic violence on Mayor de Blasio's streets," said Danny Harris, Executive Director of Transportation Alternatives. "The deadliest year under Mayor de Blasio's tenure shows no sign of letting up after crashes killed six people, including a three-month-old baby, over the weekend."

These crashes pushed the total number of people killed in traffic violence in 2021 to 188.