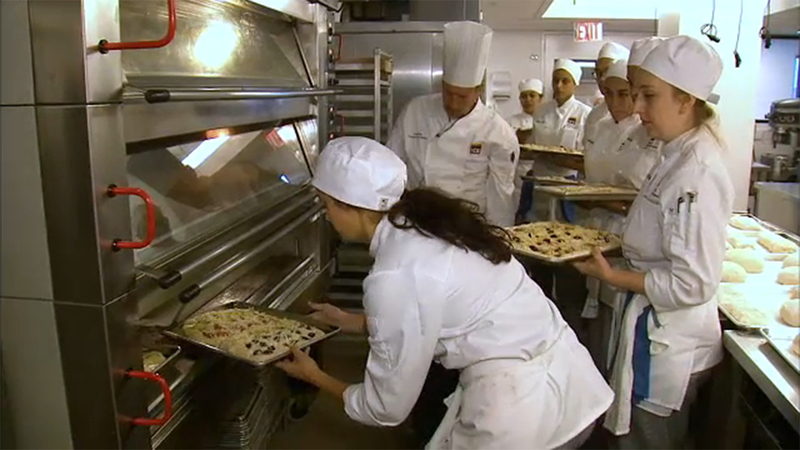 LOWER MANHATTAN (WABC) -- Chef instructors at a premier culinary school in New York City say they're getting a stale deal.

Over 15 years, chefs at the Institute of Culinary Education said their base salaries had increased by $6 per class or roughly 4%.

For a fulltime load, considered 220 classes, chefs make a base salary of $34,320 said a spokesperson with the United Federation of Teachers, the union representing the chef instructors.

"I think we should be paid, you know, what we're worth," said ICE Instructor Michael Garrett.

"We're asking for what's fair," said ICE Instructor Chad Pagano. "I feel like the school became successful on our backs."

7 On Your Side Investigates compared base salaries at ICE to other top culinary schools in New York, with data from The United Federation of Teachers.

After adjusting the salaries to account for differences in hours worked per year, the salaries received by instructors at the Culinary Institute of America and CUNY Citi Tech were at least 13% and 21% higher than the salaries at ICE.

"It's kind of absurd," said UFT President Michael Mulgrew. "I understand that a boss has a right to make money and we are fine with that, but you have to treat your workers fairly."

Representatives at ICE declined to talk with 7 On Your Side Investigates in person.

"The faculty is an important part of The Institute of Culinary Education. For many years, ICE had a cooperative and productive relationship with the ICE Faculty Committee, the Union that previously represented the faculty. In December 2016, they elected to be represented by Local 2 of the United Federation of Teachers. We are in the bargaining process with the shared goal of reaching an agreement that recognizes and rewards Faculty members for their contribution to the success and stature of the School," wrote ICE Communications Director Stephanie Fraiman Weichselbaum in an email.

"It's just a lot of words, you know, it's not really, like, money," said ICE Instructor Kathryn Gordon.

A spokesperson for UFT said both sides would be meeting for another round of contract negotiations Wednesday, November 29.

Chef instructors said they could leave the school to find better paying jobs but indicated they do not because ultimately, leaving would only hurt the students, aspiring chefs seeking an education at ICE.