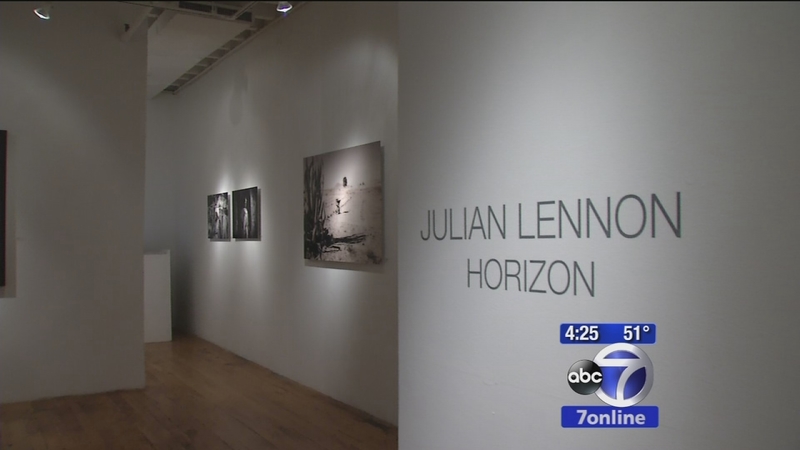 Julian Lennon making a name for himself in photography

CHELSEA (WABC) -- Julian Lennon has one of the most recognizable last names in music, but now, the son of a Beatle is making a name for himself in the world of photography.

Julian Lennon was on the top of the charts 30 years ago and was nominated for a Grammy as best new artist, and he seemed to be following in John Lennon's footsteps.

But in recent years, he has switched his focus.

At the intersection of photography and philanthropy stands a man with one of the most famous names in rock, a guy who once sold millions of records himself.

Julian Lennon says he will never stop making music, but making pictures has become his passion.

"I really have fallen in love with photography," he said. "And I also like to do as much as I can to help people."

He found a way to combine both when he traveled to Africa for a group called Charity Water.

"To raise awareness and raise money for clean water wells in Ethiopia," he said.

And what began as a personal chronicle of his trip has become a show at the Emmanuel Fremin Gallery in Chelsea.

It is through photography that he has finally been able to step out of the giant shadow cast by his father.

"It's not being compared to dad with photography, because it's not something he really did," he said.

It was Julian's first show at the Morrison Hotel Gallery that brought his family together after years apart, both wives of the late John Lennon and his two sons, all in the same room.

"It was about time really," he said. "(Half brother) Sean is blood, and I've loved him since the day he was born, so it's that simple. And it was only natural that we'd all come together."

It is proof of art's power to heal and to help.

The best things in life are free, says the old song, and so it is with this work, which can be enjoyed free of charge and also bought if you are so moved.

For more on the exhibit, visit EmmanuelFreminGallery.com.