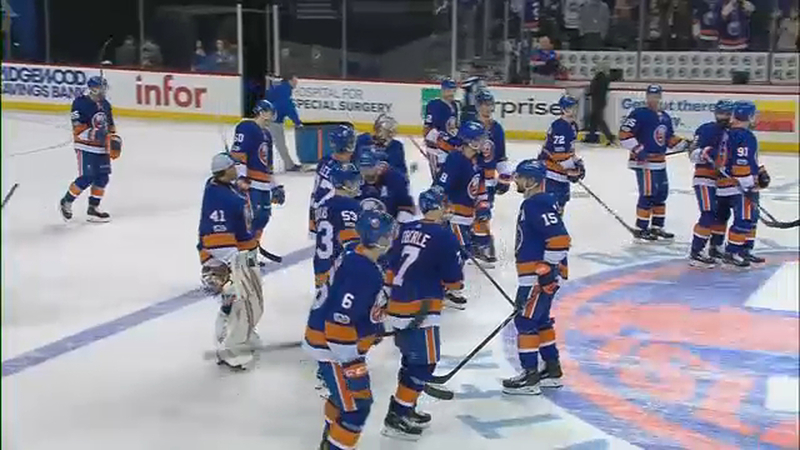 The team, which moved from their suburban home to Brooklyn in 2015, have won a bid to build a new arena on the grounds of the Belmont Park horse track.

New York Gov. Andrew Cuomo called it "a great day for Long Island" and was joined by Islanders owner Jon Ledecky, National Hockey League Commissioner Gary Bettman and others for the announcement Wednesday. He said Long Island "lost something" when the Islanders moved, and that the team is part of the identity and culture of Long Island.

The Islanders beat out a bid from the New York City FC soccer team, which envisioned building a stadium on the site in Elmont, just east of New York City.

Team officials outlined their development plans at a public meeting earlier this month. They include an 18,000 seat arena, 435,000 square feet of retail space, a 250 room hotel, a year-round LIRR station and a to-be-determined innovation center. Ledecky said the new $1 billion facility will be "the home of economic development."

The arena would create 5,000 temporary jobs and 2,000 permanent ones.
EMBED More News Videos

The Islanders played at the Nassau Coliseum from 1972 until 2015, and fans never fully embraced their new home at Brooklyn's Barclays Center.

"There's only one Brooklyn team for Barclays Center and that's the Brooklyn Nets," Brooklyn Borough President Eric Adams said in a statement. "We wish the Islanders well on their journey to Belmont, and they should consider Nassau Coliseum in the interim period."

According to sources, Brooklyn Sports & Entertainment, which runs the Barclays Center and the Coliseum, wants the team out as soon as possible because they stand to make more money with concerts and other events then hockey games. They have made a proposal to the team to start playing their home games at the Coliseum next season. The team hasn't responded yet.

Both sides have until January 1 to reach an agreement on what happens next. If they fail to do so, both sides have until the end of January to opt out of their current contract. If the Islanders opt out, they will leave Barclays Center after this season but would clearly need a place to play their home games. If BSE opt out, the Islanders will leave after next season, which would be their fourth at Barclays.

Bettman has long said the Coliseum was not a permanent solution for the team, but Governor Cuomo said he is hoping the league will let the team play there until the new arena is finished.

Belmont Park racetrack, which opened in 1905, runs thoroughbred meets from April through July and then in September through October. It is home to the third leg of horse racing's Triple Crown.