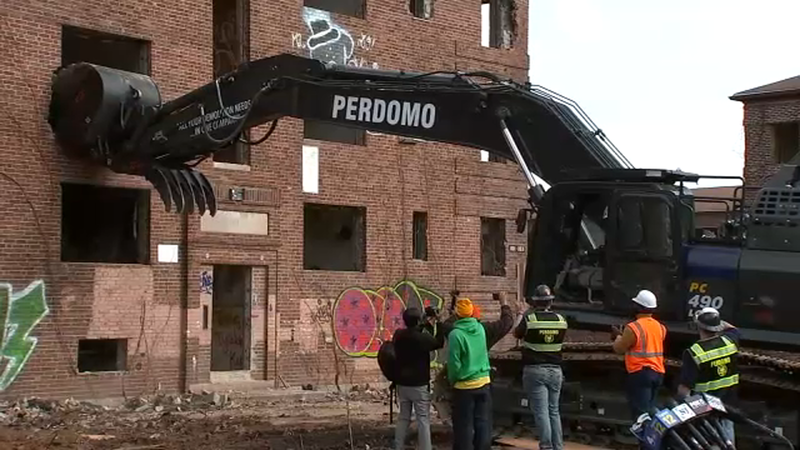 "We want to revitalize, repurpose, transform this whole neighborhood. It's not just about this project. It's about this entire community," Newark Mayor Ras Baraka said.
New, affordable housing will be going up on the site.

There are also plans for a school, stores and a health facility.

"I'm just delighted to see the old going out and the new coming in," Rep. Donald Payne said.

Built in 1939, Seth Boyden Court was the first public housing complex in Newark.

The complex was built after the Great Depression, and served as a home to generations of children and families.

The 530 apartment units, in 12 buildings, were closed due to high maintenance costs and public safety issues in 2015, and the tenants relocated at the same time.

Since then, the property has been abandoned.

The complex received demolition approval in 2014 but due to the lack of funding, it had been standing empty, becoming a target for squatters, illegal dumpers and graffiti.

But for the hundreds of families who once lived here, that's not what they see at all.

"This was our home. We used to slide down this hill when it was snowing," former Seth Boyden resident Mignon Johnson said.

Mayor Baraka and the city of Newark stepped in and offered to extend $4 million towards the demolition in the form of a loan to be repaid from redevelopment proceeds.

"The Housing Authority and the Board of Commissioners are grateful to get to this point of the redevelopment process, which would not have been possible without the assistance of Mayor Baraka and the administration," Newark Housing Authority Executive Director Victor Cirilo said.


While the bricks that came down Thursday are a treasure of the glory that has faded, it also points to the future, and that it's not gone forever.

"I'm emotional, I am. But if they're doing something new with the foundation, it was a good foundation," former resident Selina Dudley said.