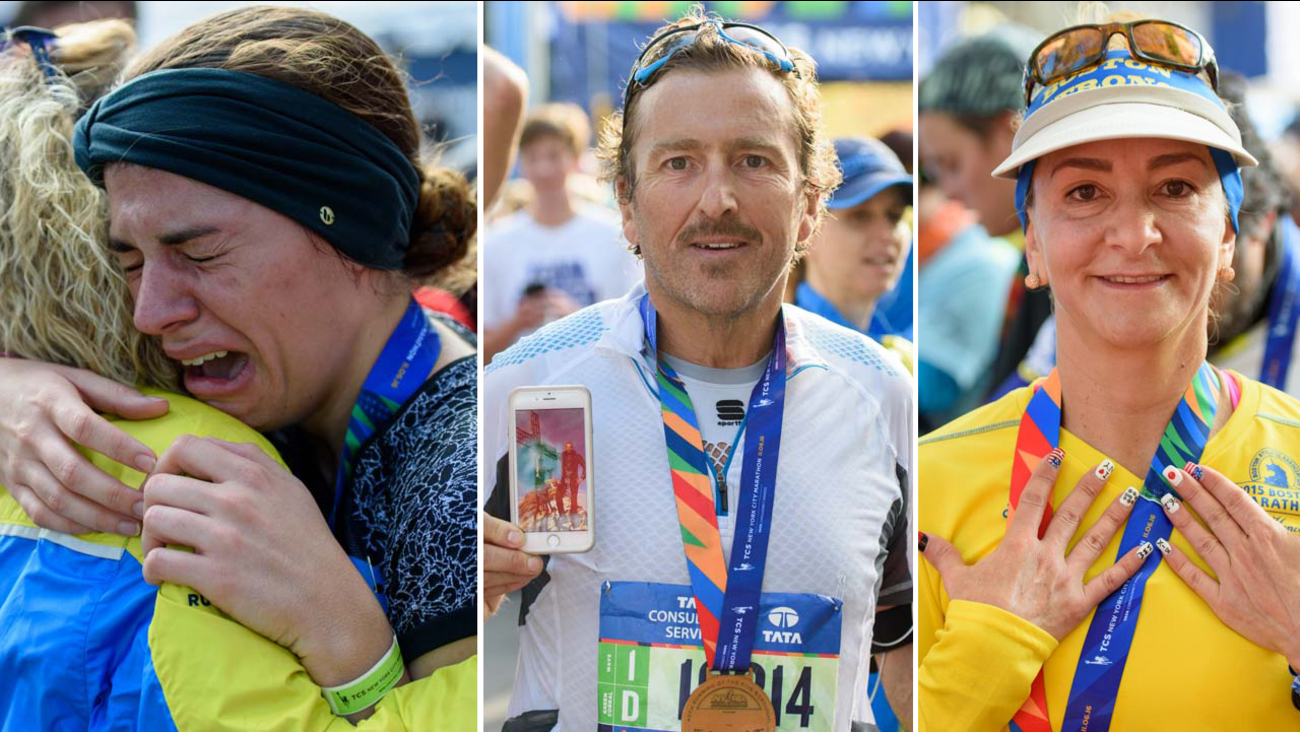 We were positioned just past the finish line, and asked runners why they were running and what kept them going. Check out their stories below. 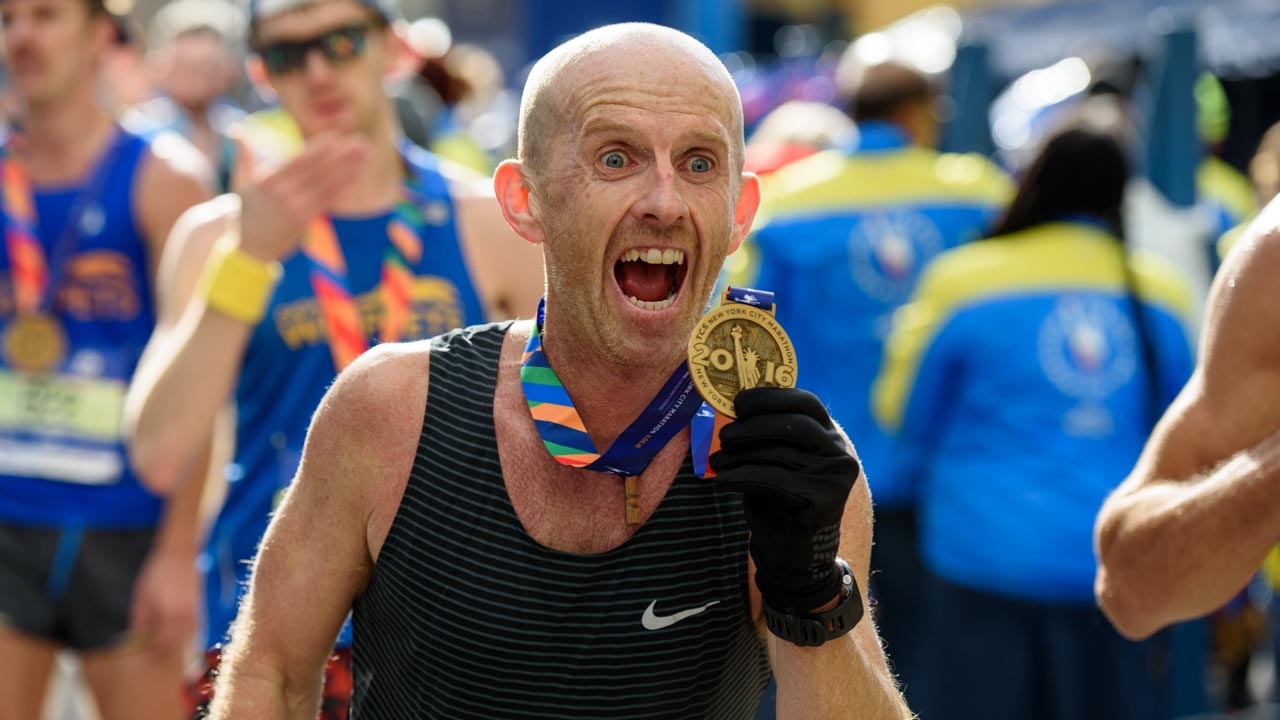 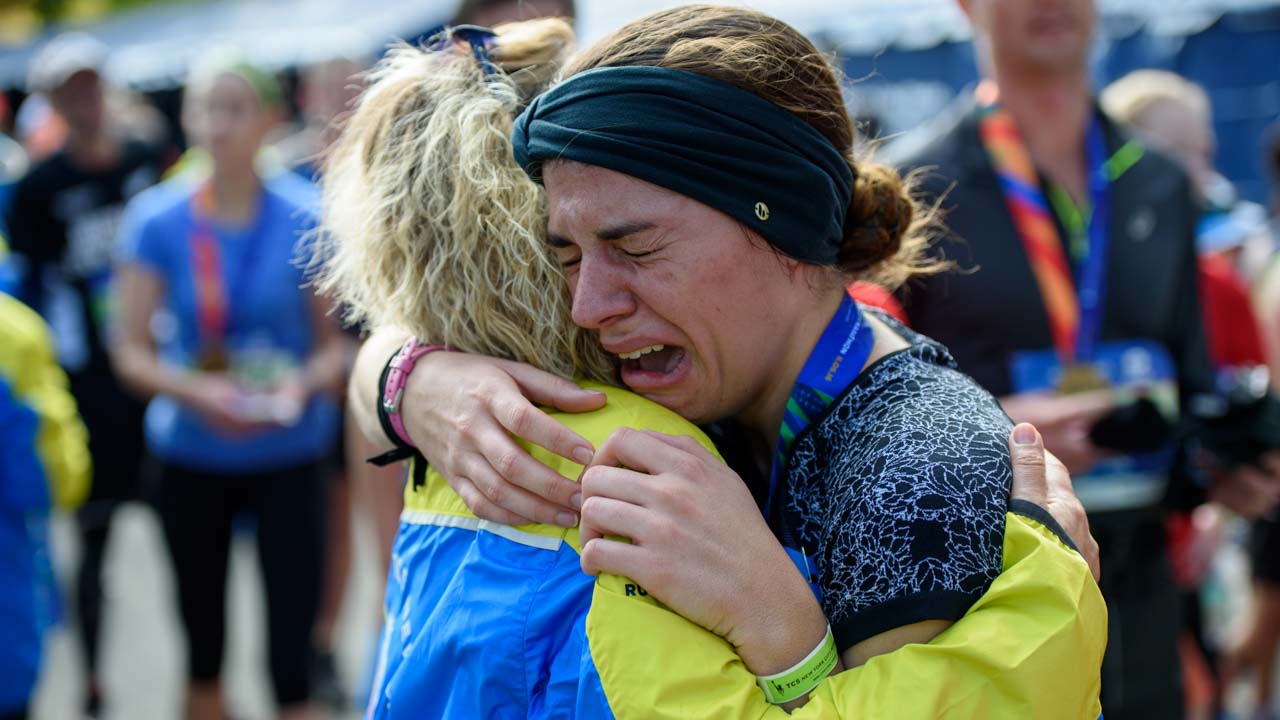 RUNNER: Sarah Bernier / Albany, New York
"(I was running today) just to prove myself wrong. Just to show me what the human body can do. It's amazing. My dad can't run. He has Multiple Sclerosis and he's paralyzed from the waist down. So I was running out there for him. I don't know why I was so emotional. It's the most difficult thing to explain. It's the most overwhelming thing, I can't even tell you how or why, you know what I mean? I think that it's just so much bigger than me. This is the best marathon in the world. People say if you're only going to do one, do New York. It's my first one, too."
---------------------- 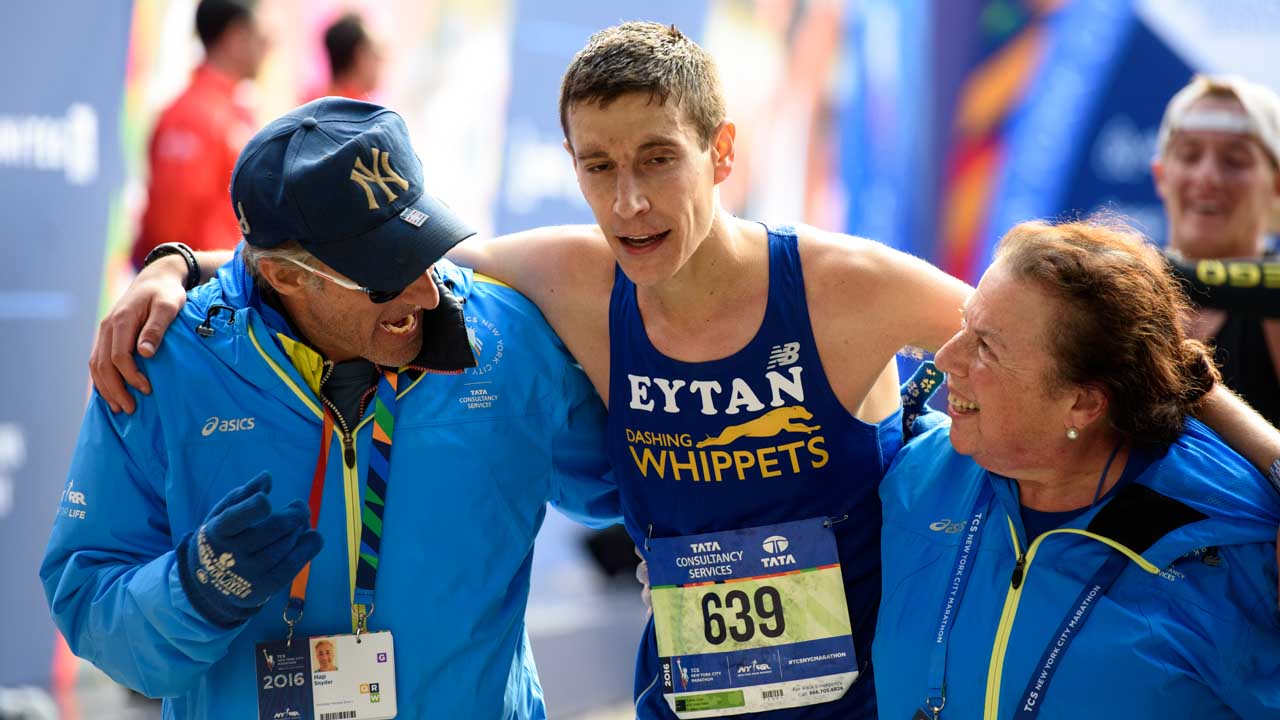 RUNNER: Eytan Kurshan / Brooklyn, New York
"I had a very specific goal, which was 2:50. I had shingles last week and I still did it. I'm not contagious, don't worry. I was running for the Dashing Whippets running team. They turned me from a casual runner into a serious marathoner, and I'm very grateful to them."
---------------------- 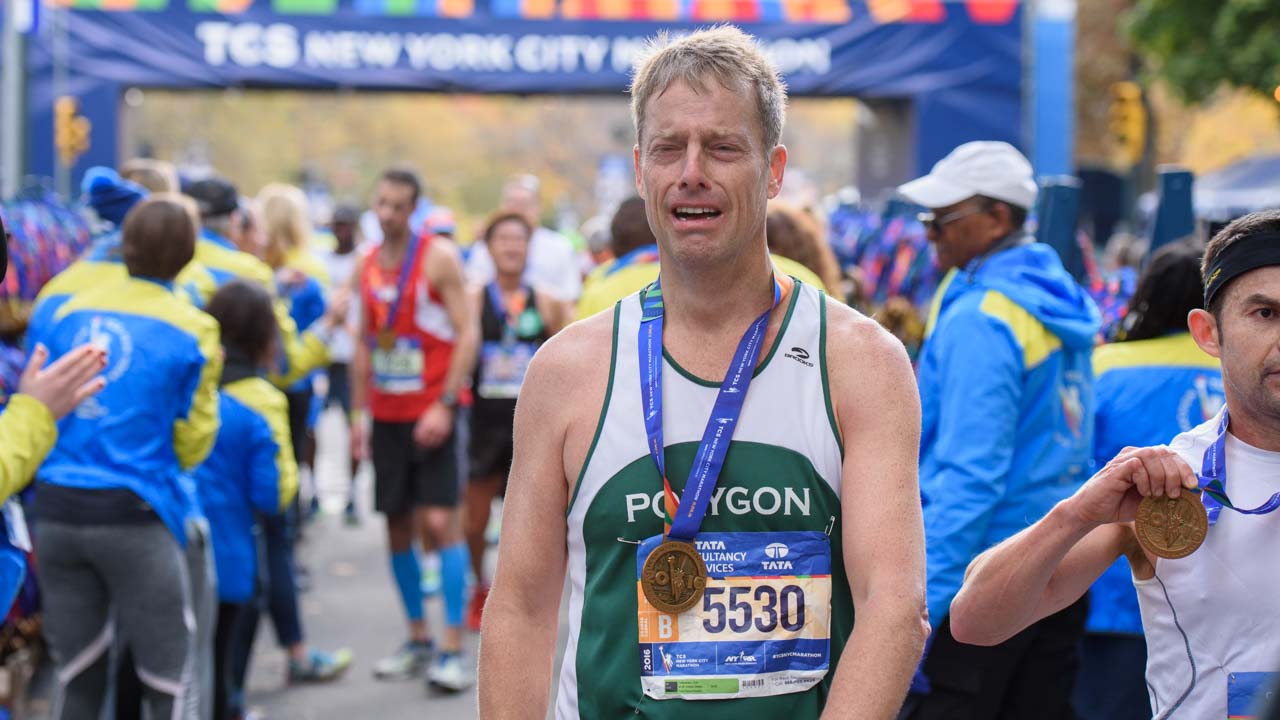 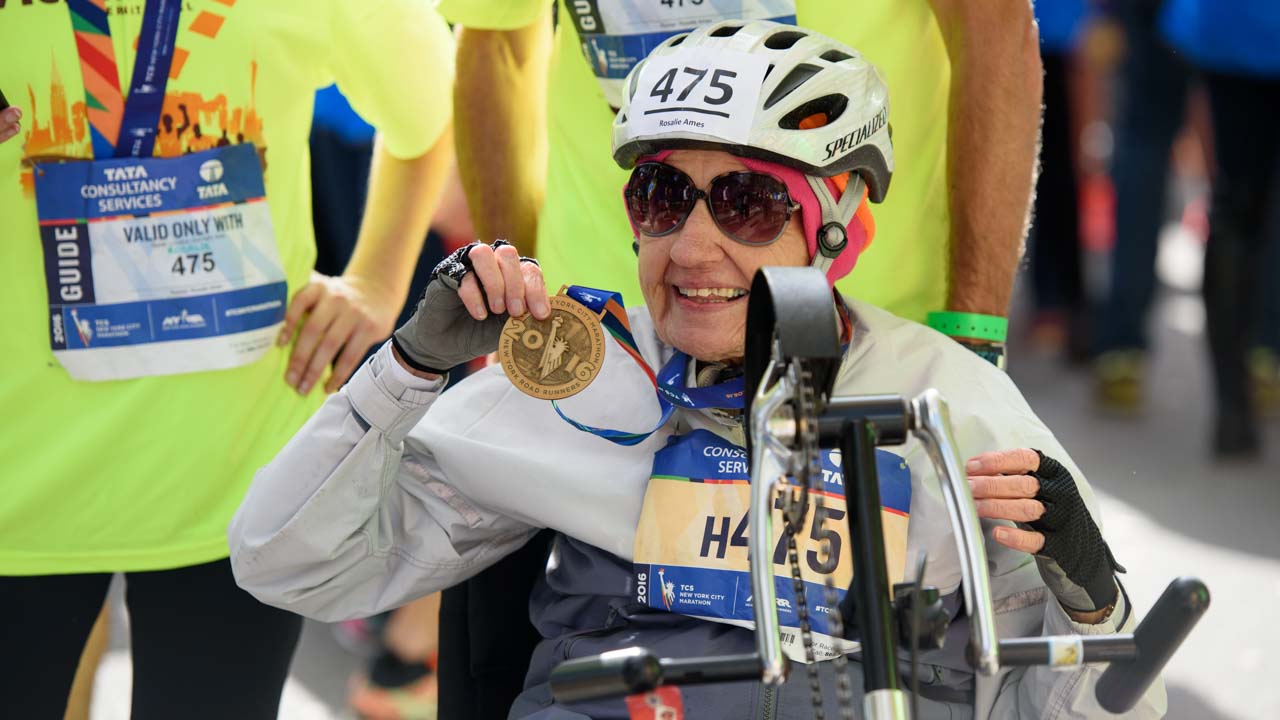 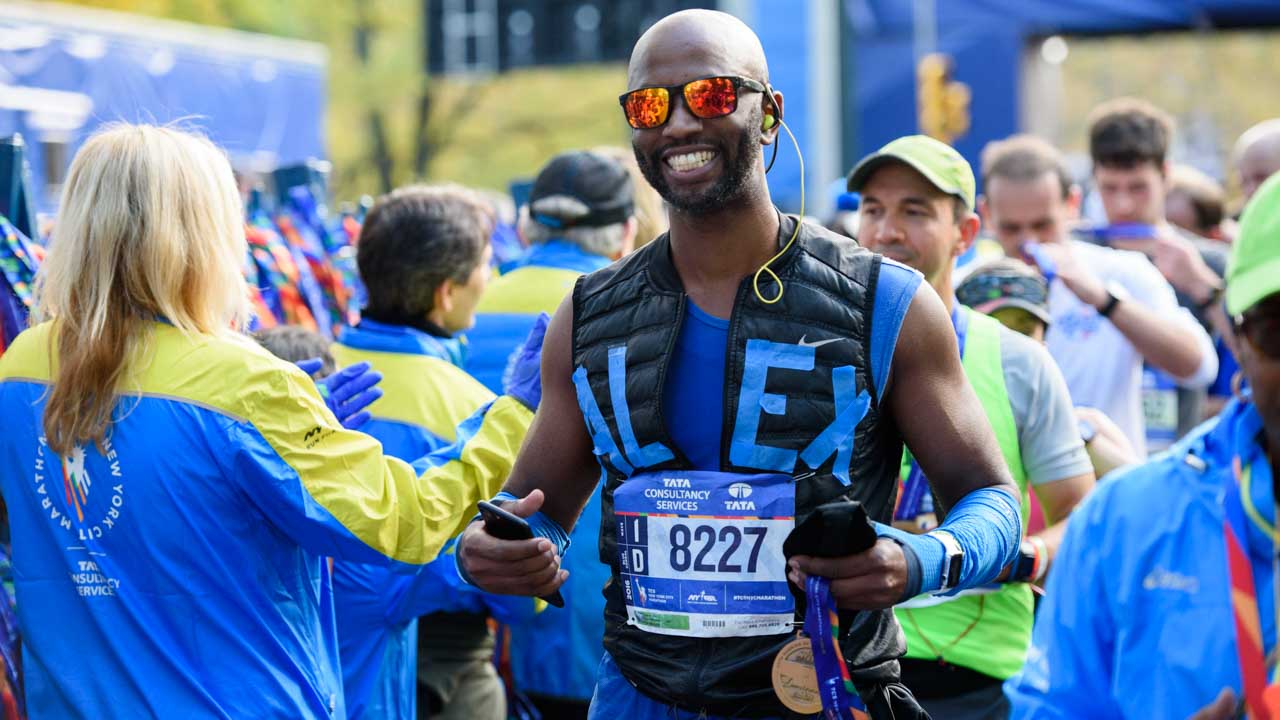 RUNNER: Alex Hyppolite / West Village, Manhattan
What got you through the race today? "Knowing that my friends were tracking me. I didn't want to embarrass myself, because I talked a lot before I ran the race. I was running for myself. I'm trying to run a marathon on all seven continents so this is just another one on the list. This is five."
---------------------- 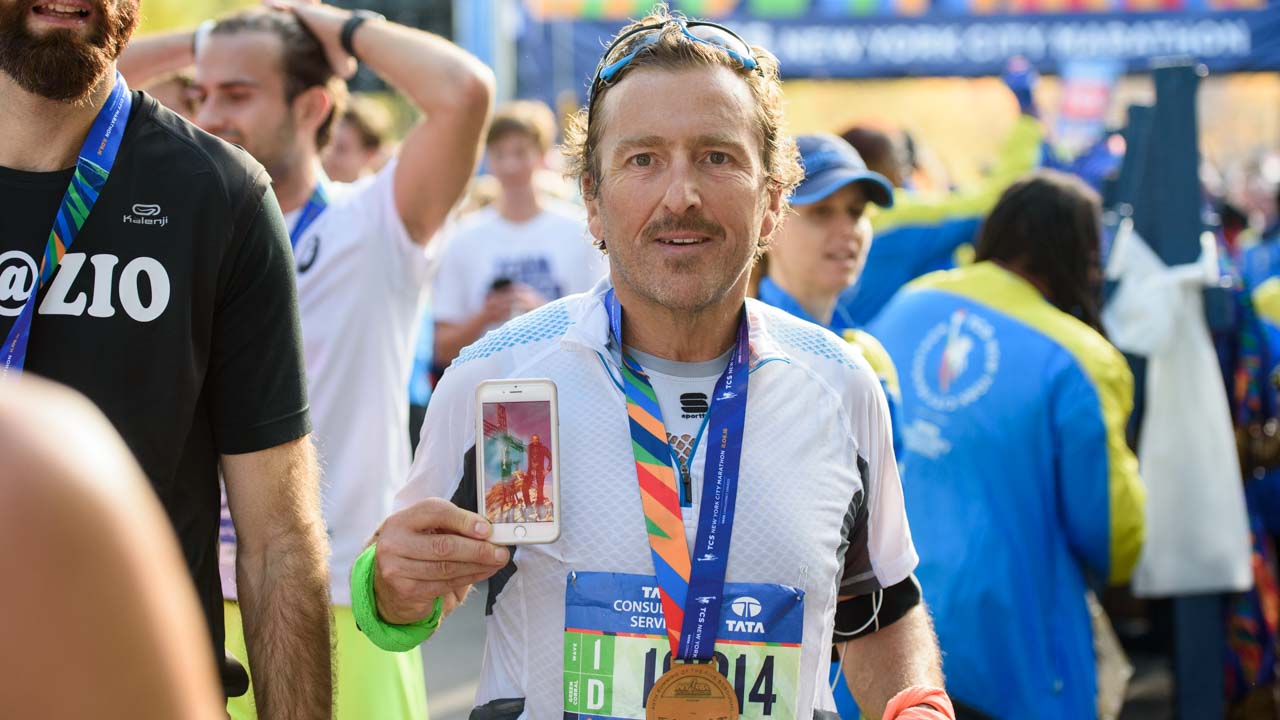 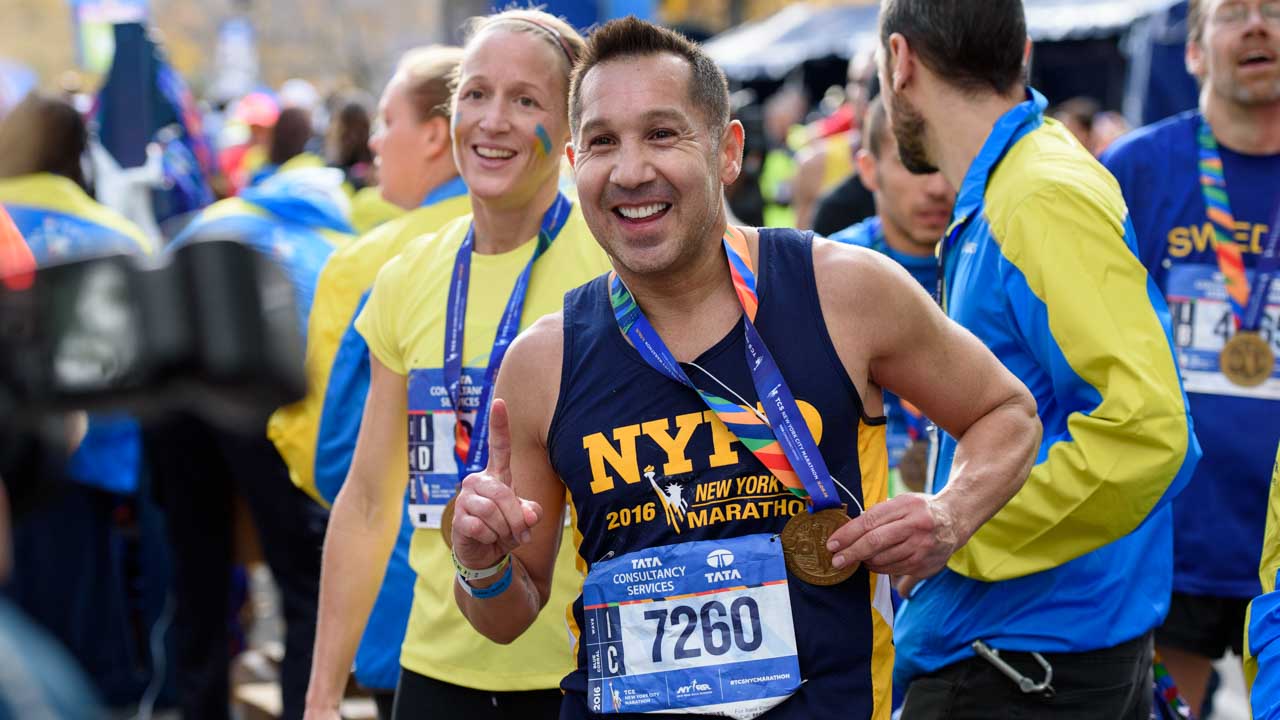 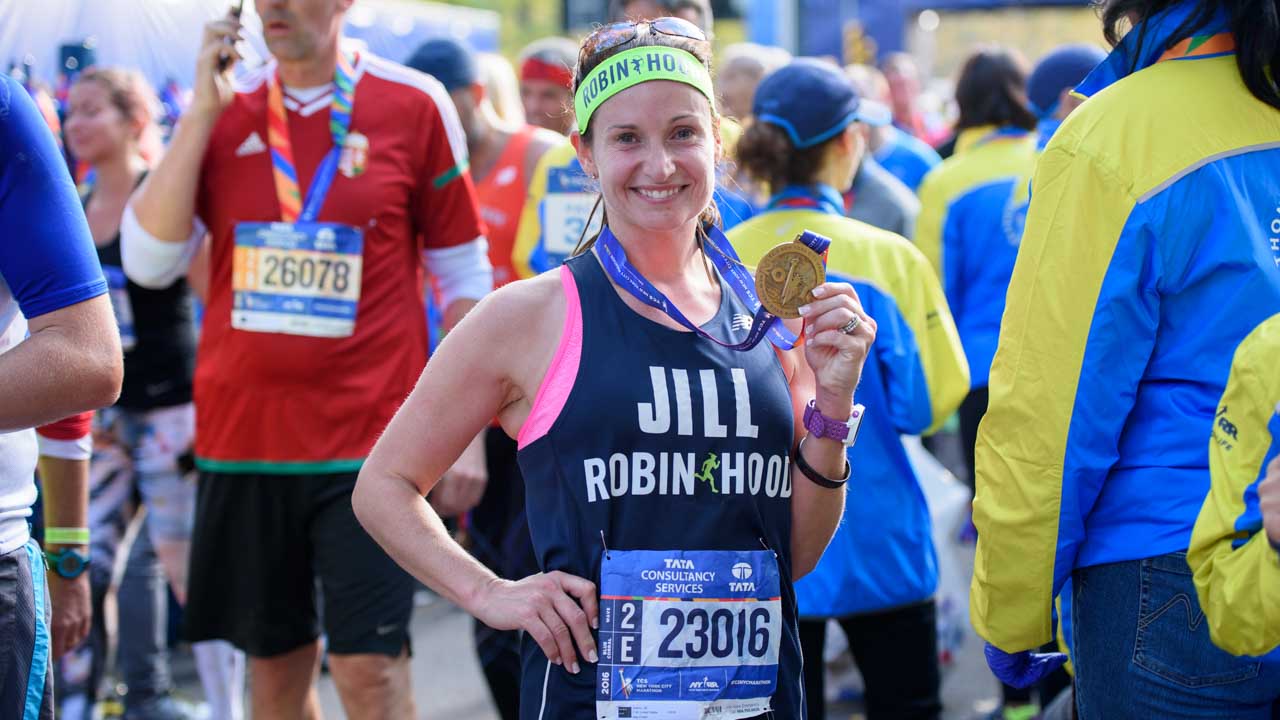 RUNNER: Jill Swarni / New Canaan, Connecticut
"I was running for Robin Hood. We have so many people in this country and this city that need our help, and the least I could do is sacrifice 16 weeks of my time to run something I've never done before to help those people in need, and they're all better for it. I raised $7,000. A fund matched everything over $5,000 so I actually raised $9,000, and every dollar went to all of the poverty in New York City."
---------------------- 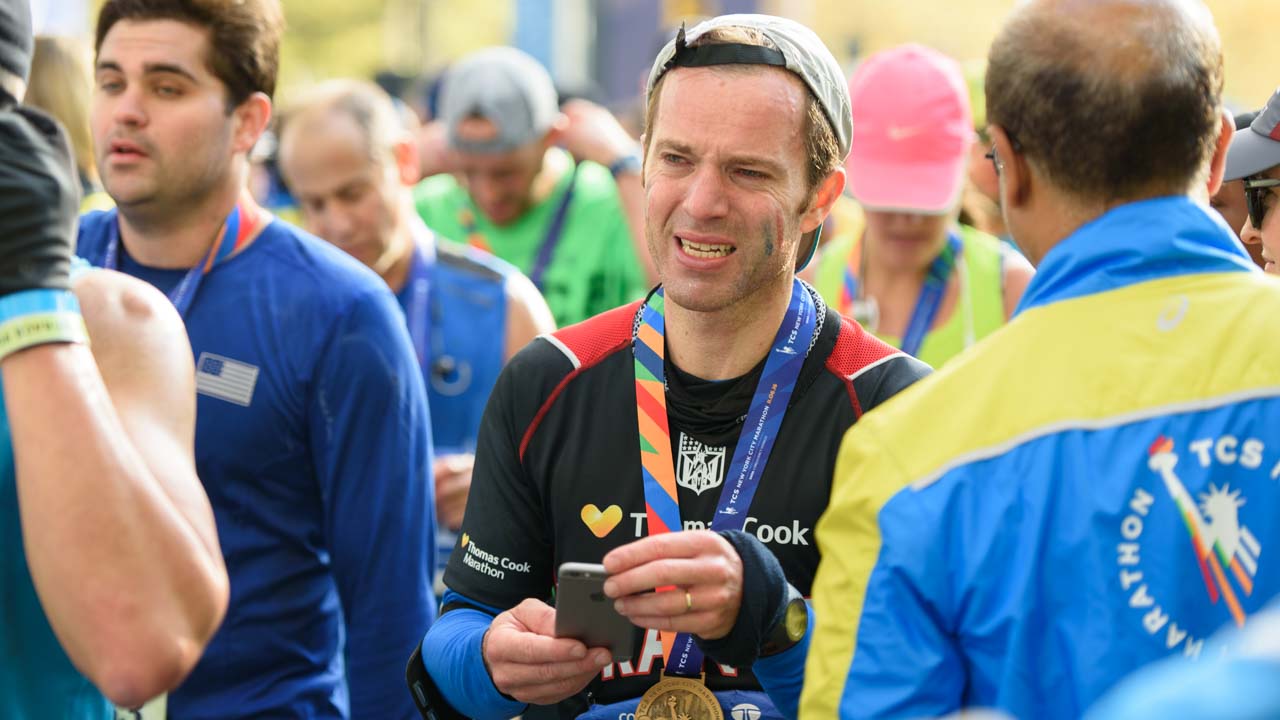 RUNNER: Fred Pellereau / Normandy, France
"It's my third marathon. Ten years ago, I wanted to do the New York Marathon. It's my third one, it's the most beautiful. It's a dream for me. I ran it with my friend and we arrived together. The Queensboro Bridge is very, very difficult, but the end of the bridge is like a dream. The climb is really, really difficult. It's a beautiful town and the end of Central Park is endless."
---------------------- 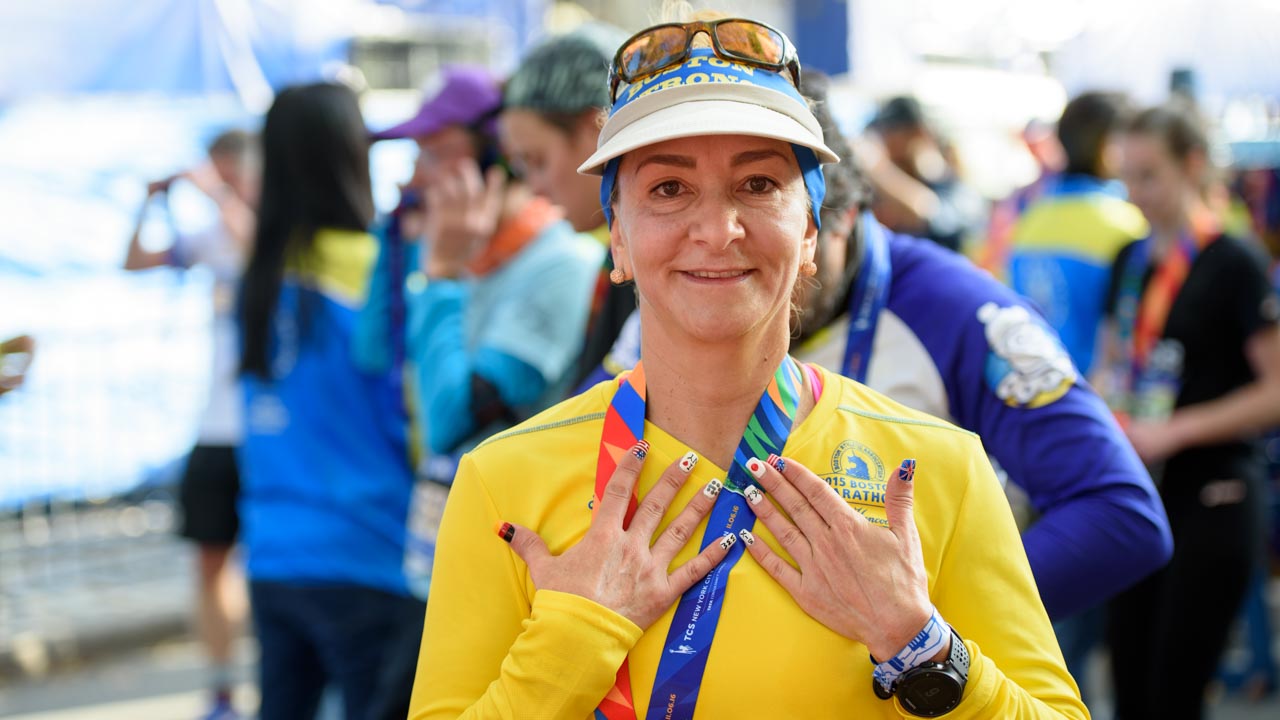 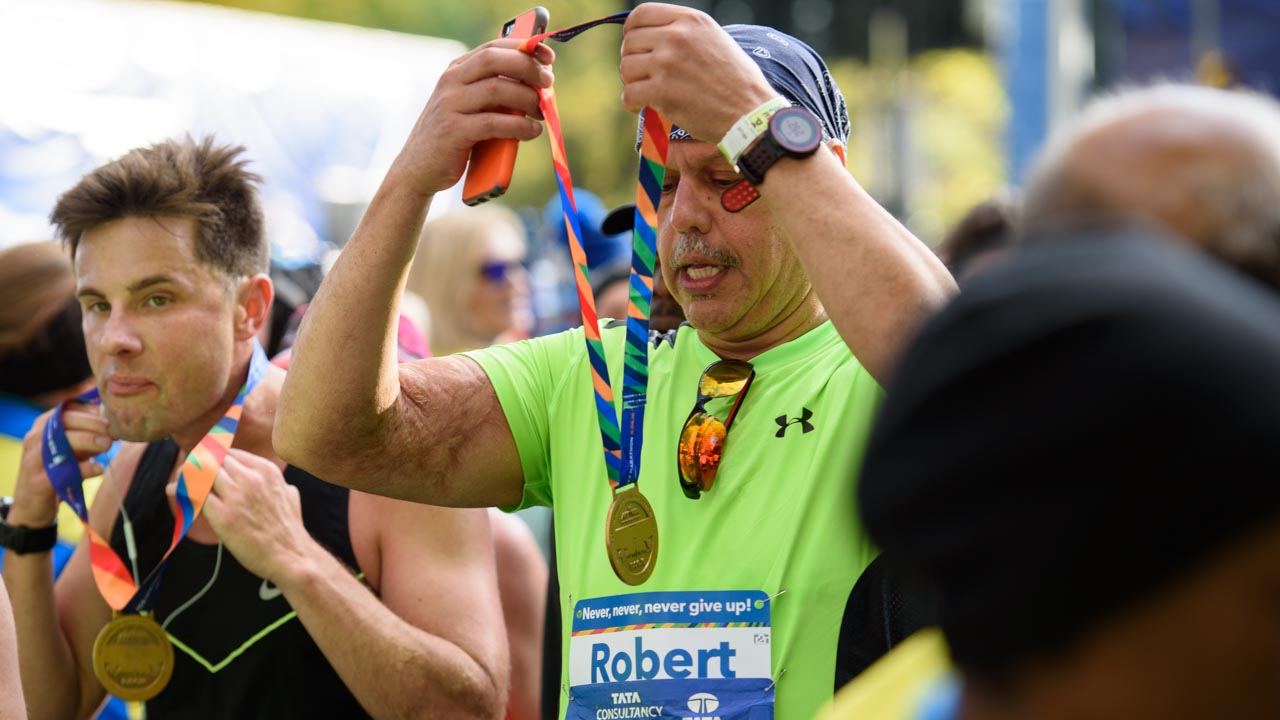 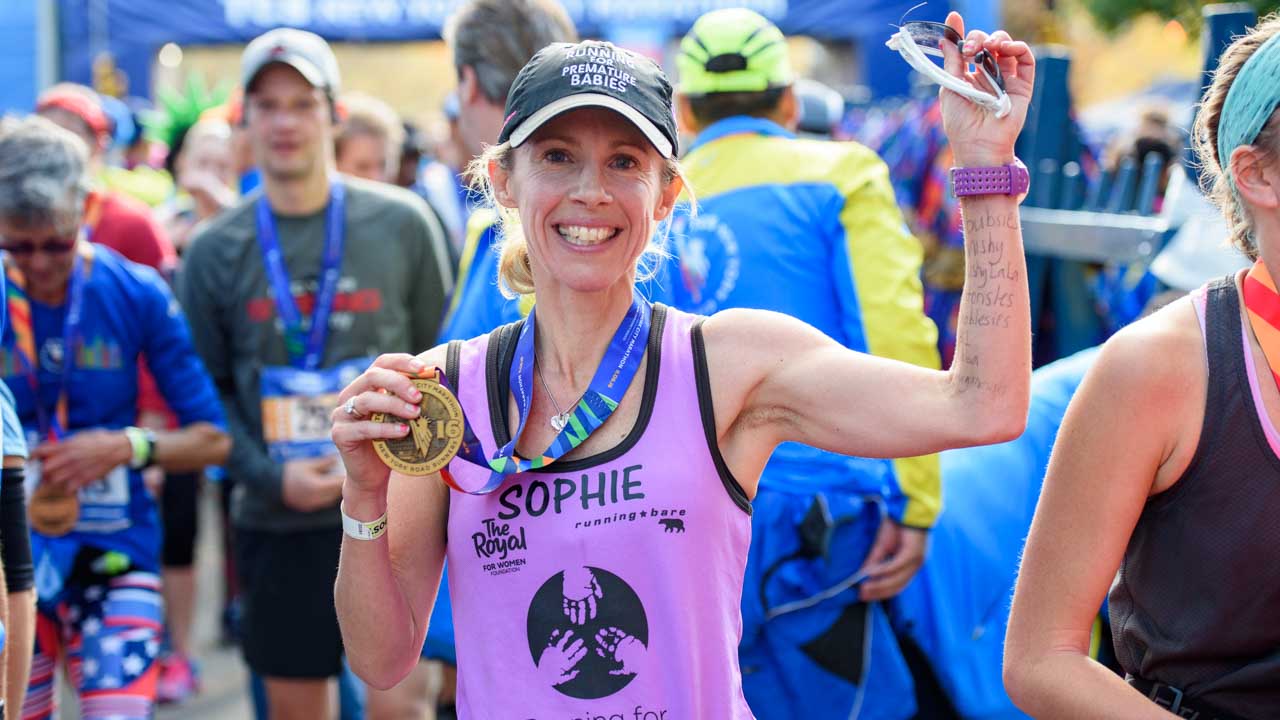 RUNNER: Sophie Smith / Sydney, Australia
"Ten years ago I had triplet boys and they were born prematurely. They were in intensive care and we lost them over three months. They died. After they died, I wanted to raise some money for the hospital that cared for them in Sydney. I wanted to raise $20,000 for one humidicrib. It's now 10 years later, and we've now raised $2 million and I've now come to New York for the first time with 17 people from Sydney running on my team. I just smashed my first marathon in 4 hours, 4 minutes. Another part of my story is my husband. Eight months ago he died of brain cancer. He couldn't come with me, but today I wrote on my arm all of the different names my husband called me. At 35K, I was out, so my husband took over and I flew the last 7 kilometers. So I'm just really proud."
---------------------- 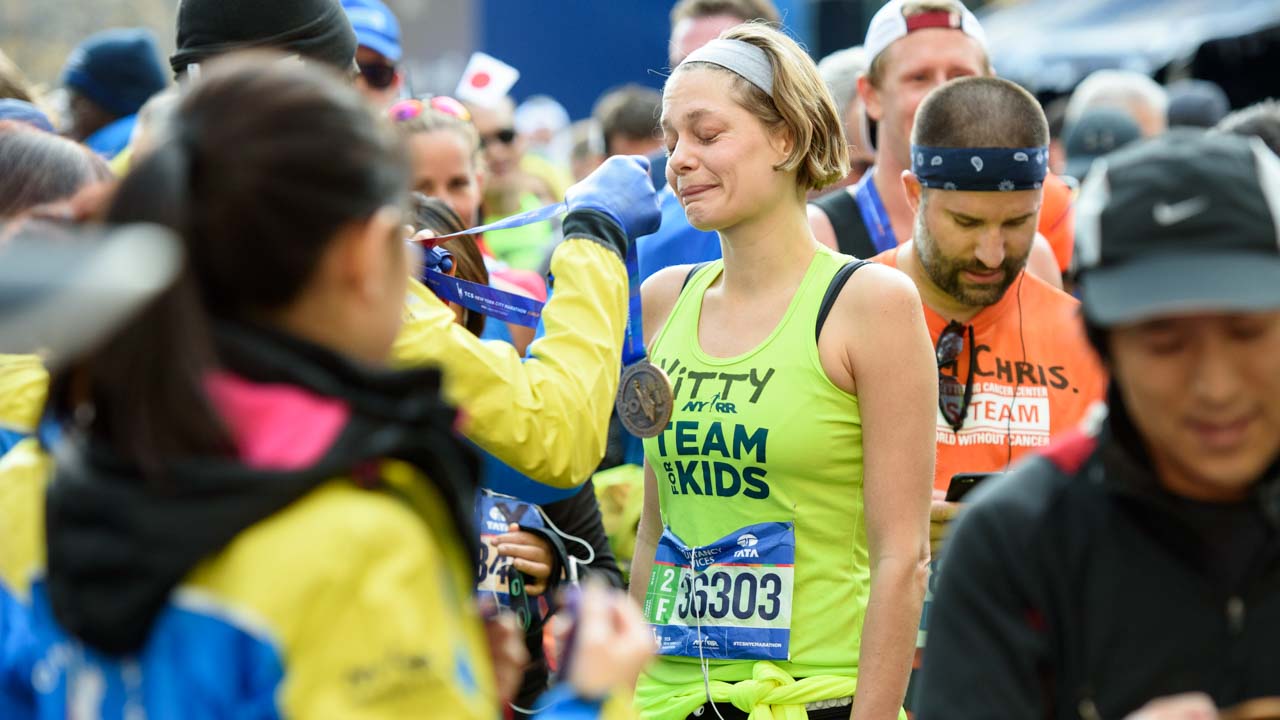 RUNNER: Kitty McKibbin / London, England
"I was running for Papyrus, which helps with the prevention of young suicide, in memory of my ex-boyfriend. It feels completely unreal. This was my first marathon, without any training. This is like my 15th run. I hardly trained at all. It was hard. I can't believe I finished."
---------------------- 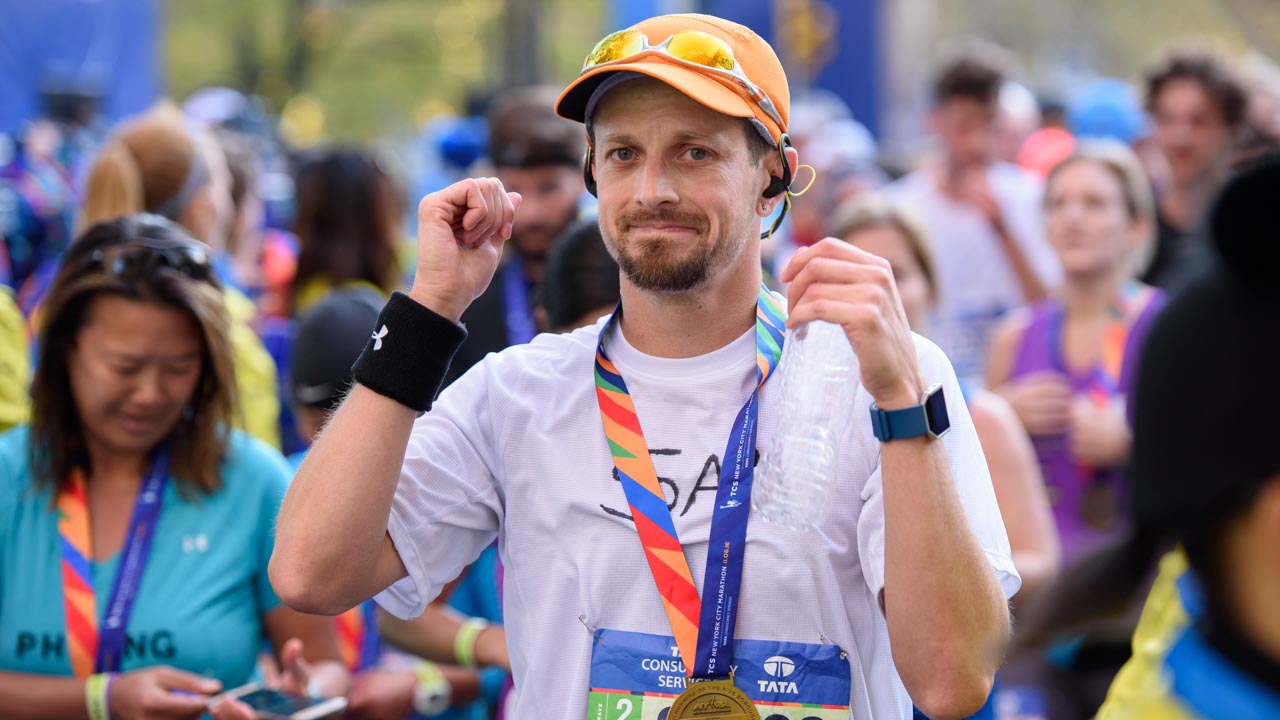 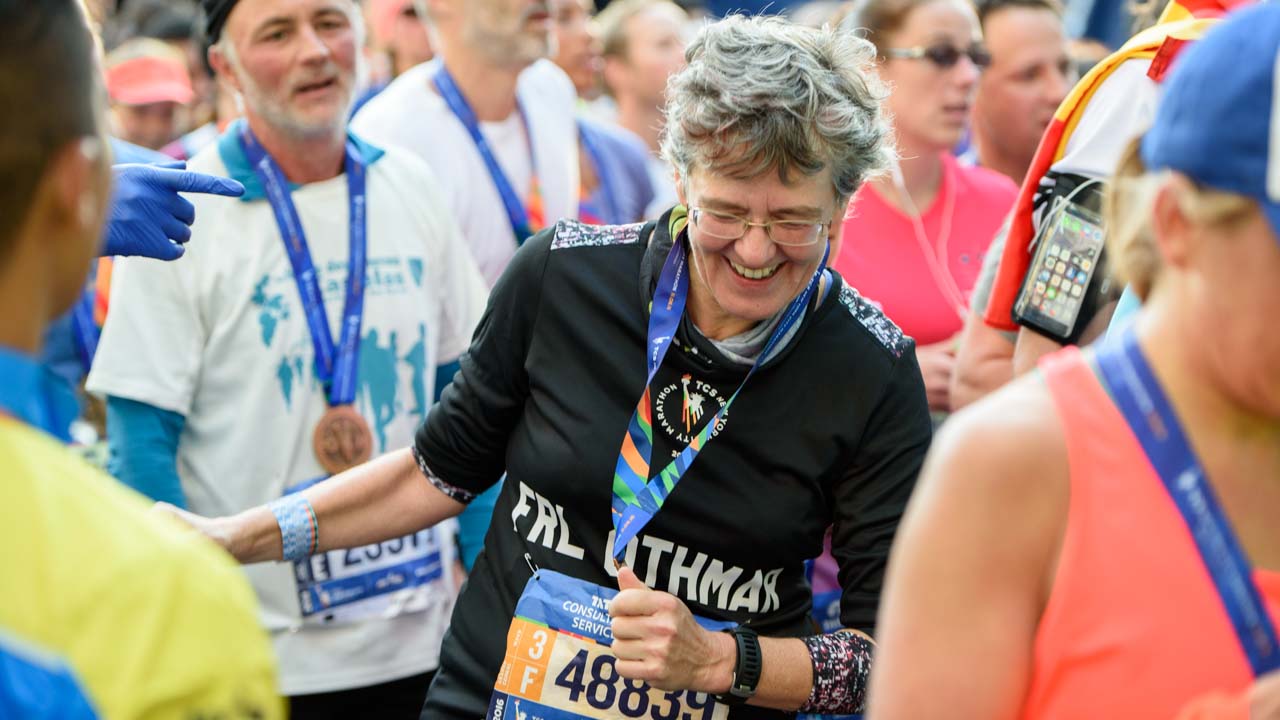 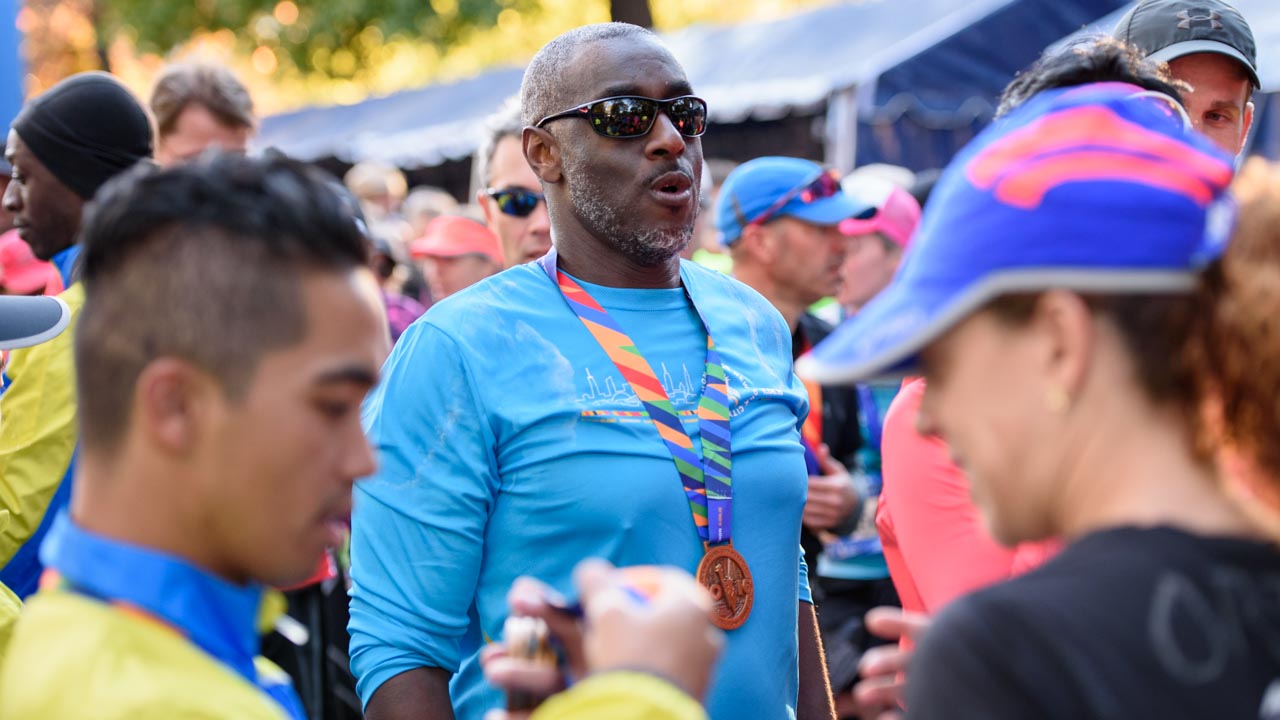 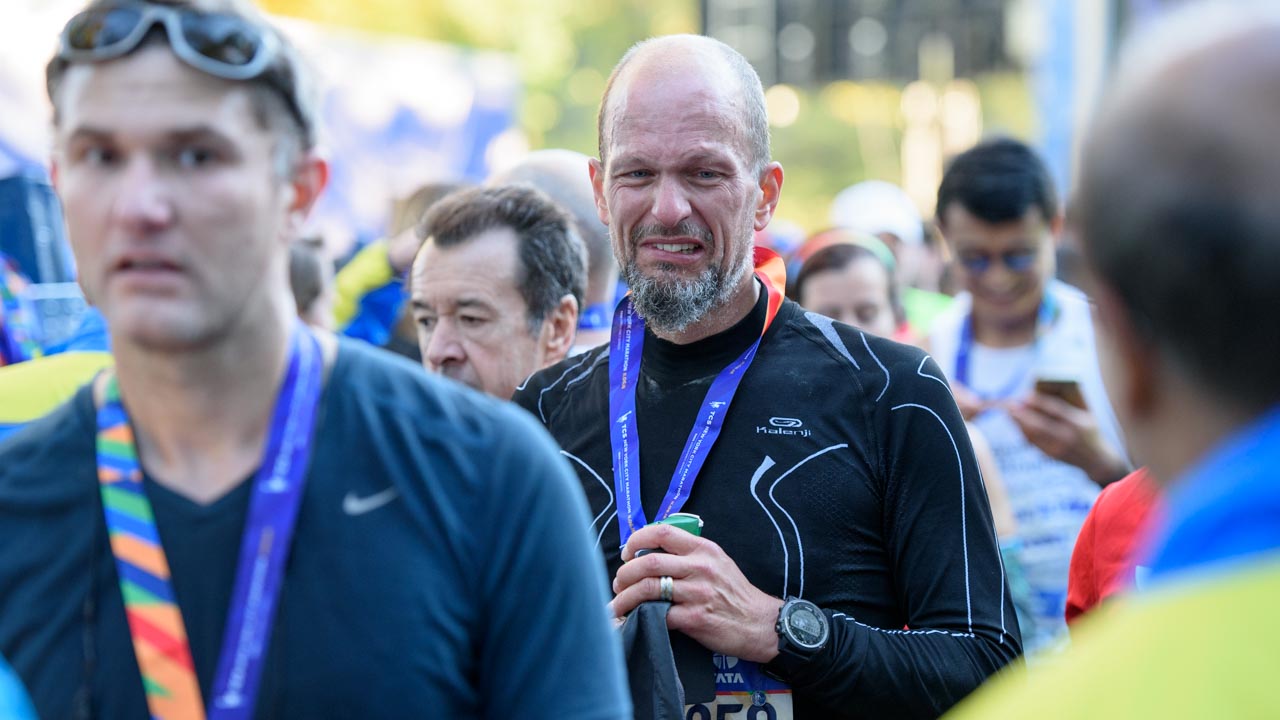 RUNNER: Pascal Lorenzini / Bern, Switzerland
"It's 10 years since my first marathon in Reykjavik, where I proposed on the finish line. I did that together with my wife. She's now back home with the 7- and 9-year-old in Switzerland, and I get a chance to run the New York City Marathon 10 years after in the city where I accomplished my masters degree. I studied at Syracuse University and defended my thesis here on 61st Street. So I'm sort of overwhelmed. I didn't run for 9 years because of the kids, and this year I just thought turning 47, reduce the heart stroke risk, start running again. It's just the greatest feeling in the biggest city in the world."
---------------------- 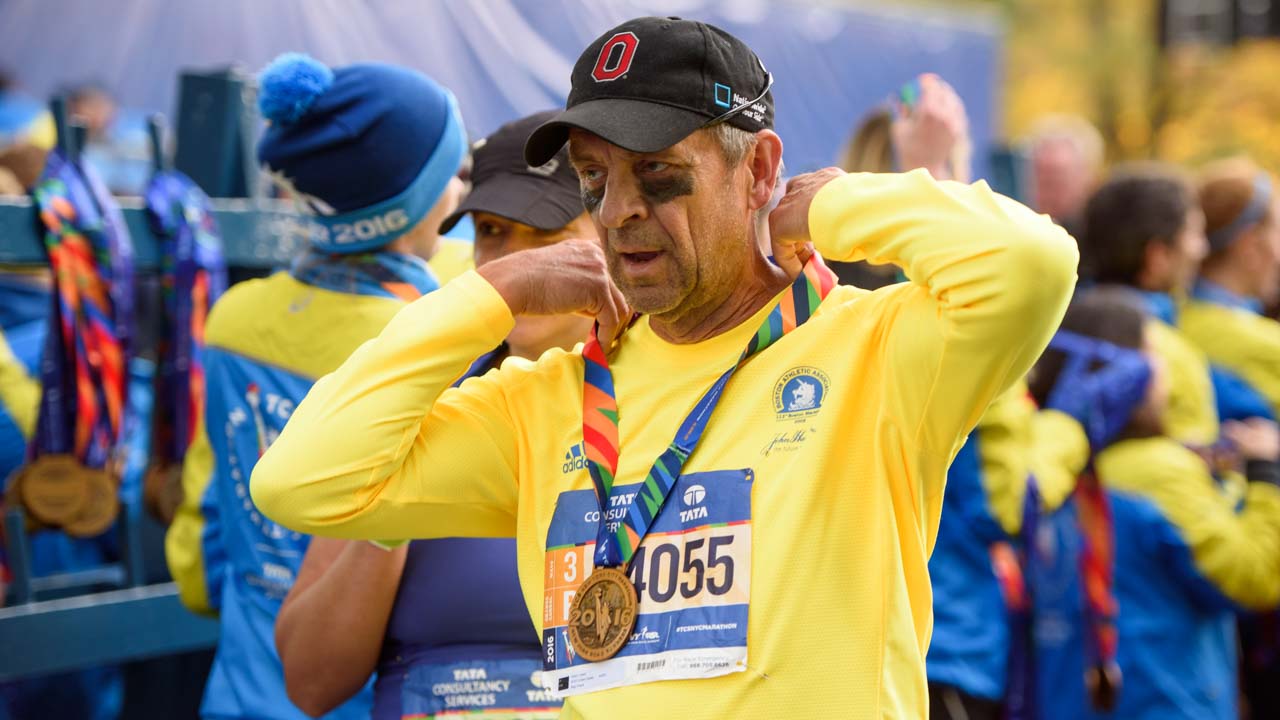 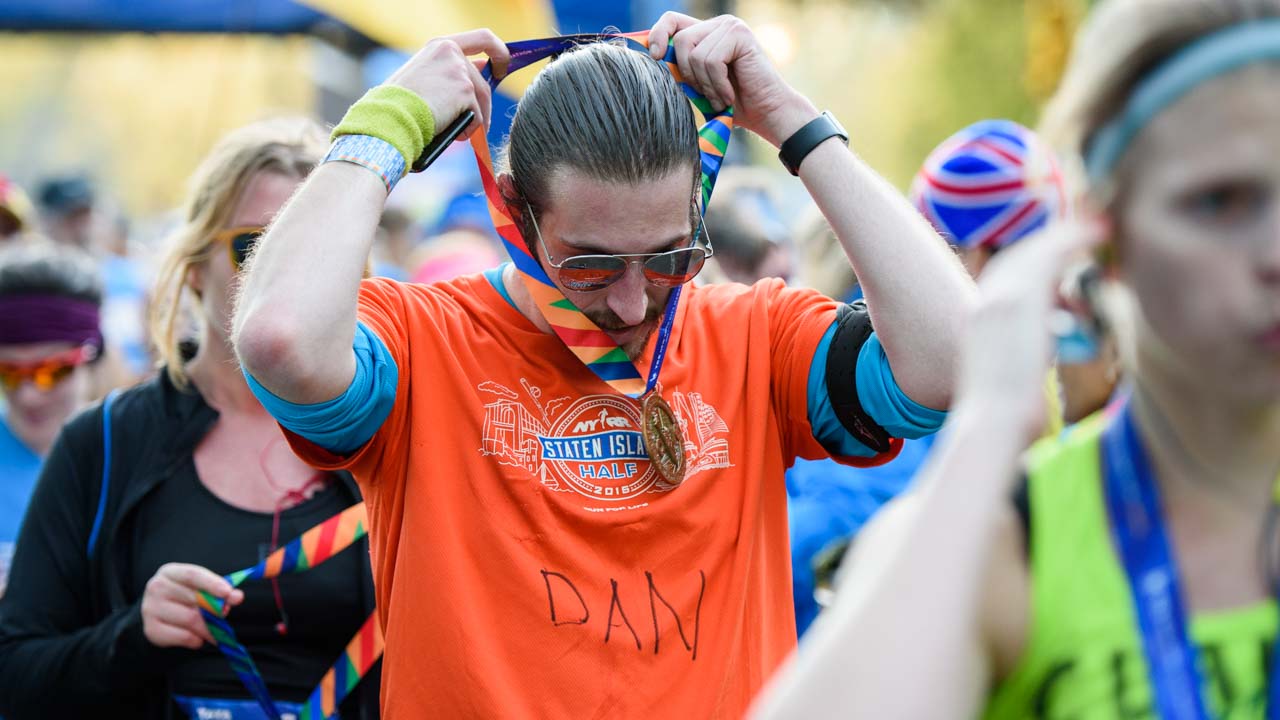 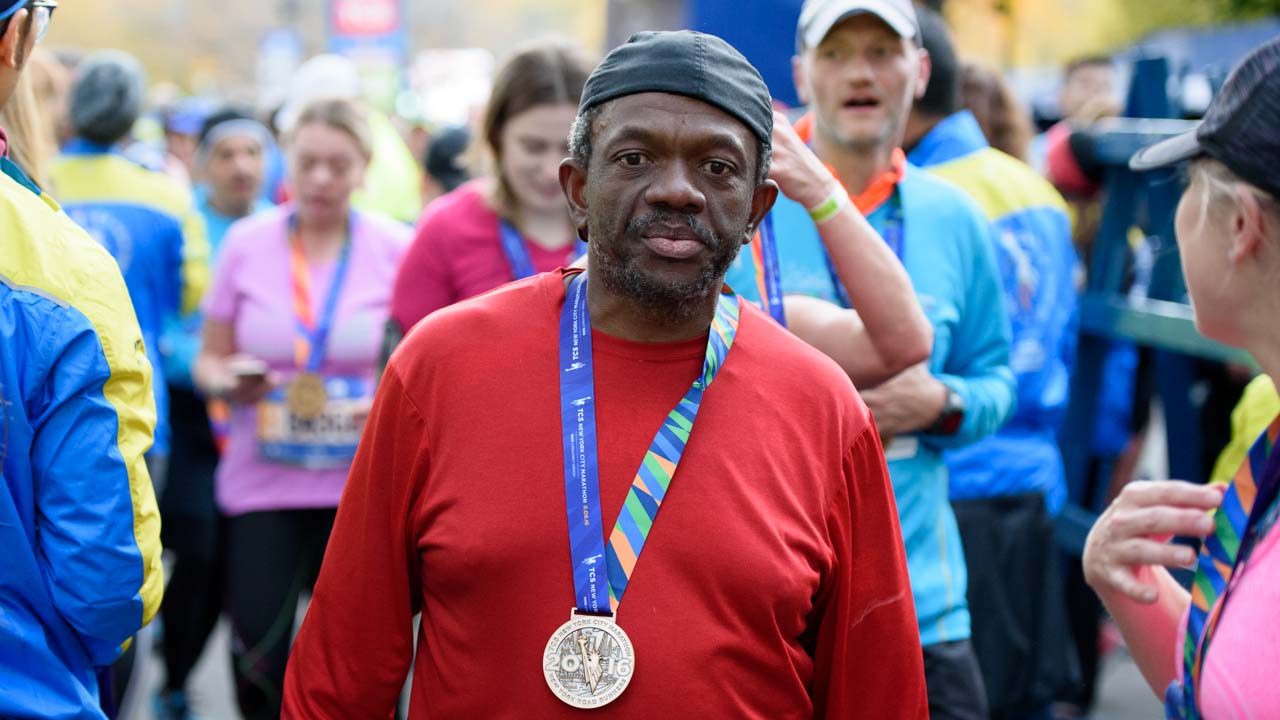 RUNNER: Chinyere Obasi / Kearney, Nebraska (originally from Nigeria)
"I want to run all of the six majors. I've done Chicago and Berlin so this is my third one. I've got Tokyo coming up next February. I figured I've done it before so can do it again. I knew it would be hard, so I was prepared for it to be hard and just kept going. It's harder than I thought."
---------------------- 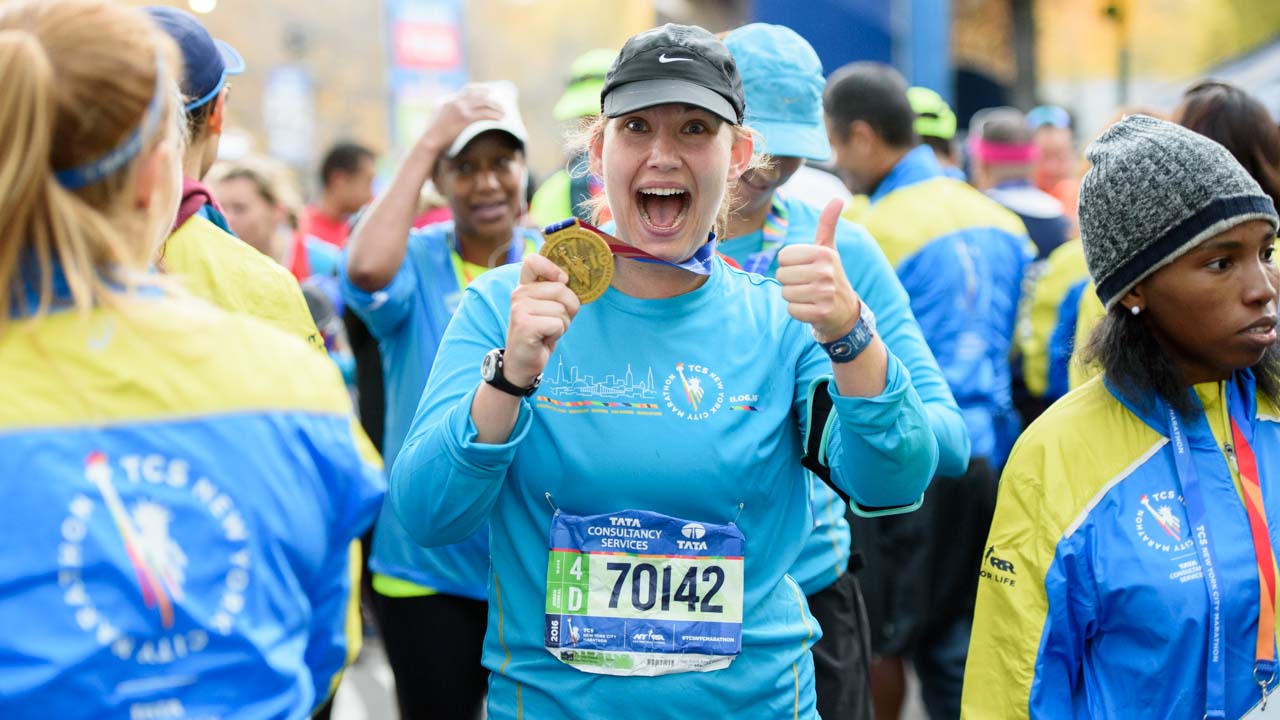 RUNNER: Rachael Gresson / Washington, D.C.
"My partner and I are from New Zealand and we've been living over here for a couple years. We found this great charity that I wanted to run for called "One Love Foundation." They do great work to help kids on college campuses avoid domestic violence and identify signs of domestic abuse. You know, it's a hell of a challenge, it's 26 miles and I was really on it to raise money. The meal at the end is the icing on the cake. It wasn't our first (marathon), but it was bloody the toughest."
---------------------- 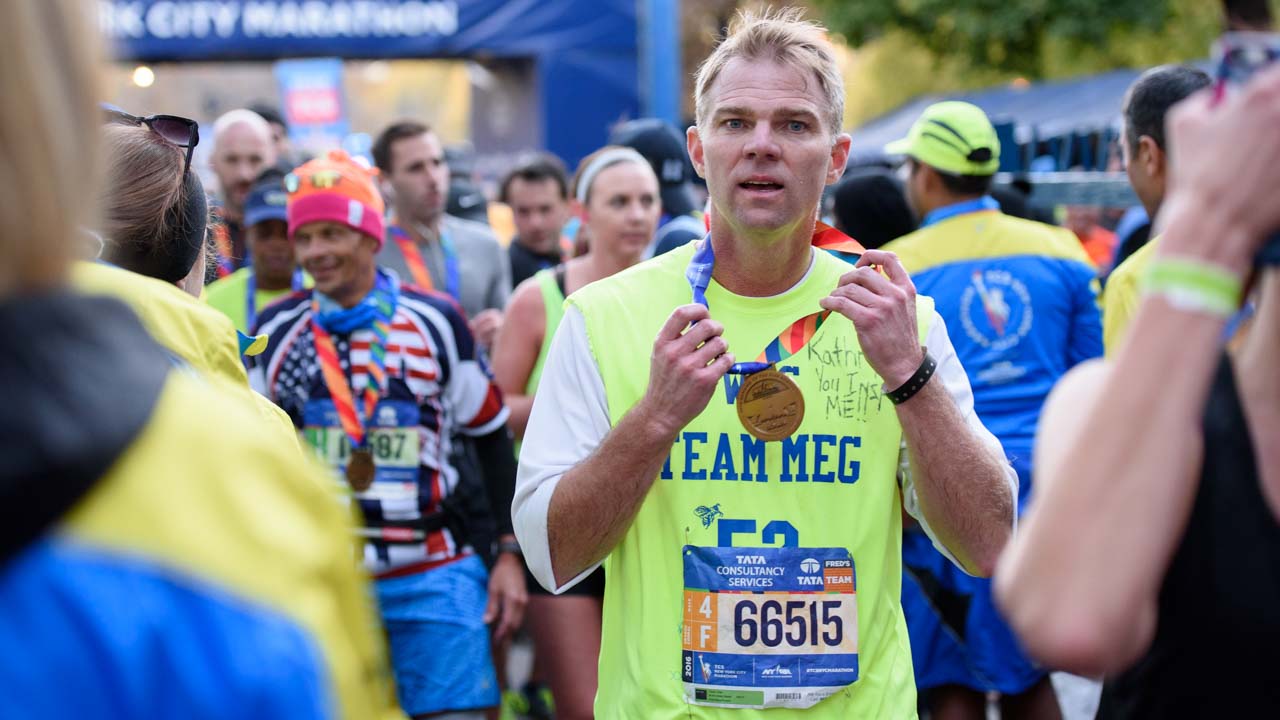 RUNNER: Wes Owen / Manhattan, New York
"I run for Team Meg, which is apart of Fred's team, which is Sloan Kettering Cancer Center. But it's a specific fund at Sloan Kettering that funds survivorship research. She passed away about 7 years ago, and survivorship, all of the challenges after cancer is what she was passionate about. So we started a fund in her name. It's about $1.2 million and researches just that subject. Each year we raise about $90,000 or $100,000 with 70,000 runners through Sloan Kettering and through Fred's team, and running in her honor means everything to me."
---------------------- 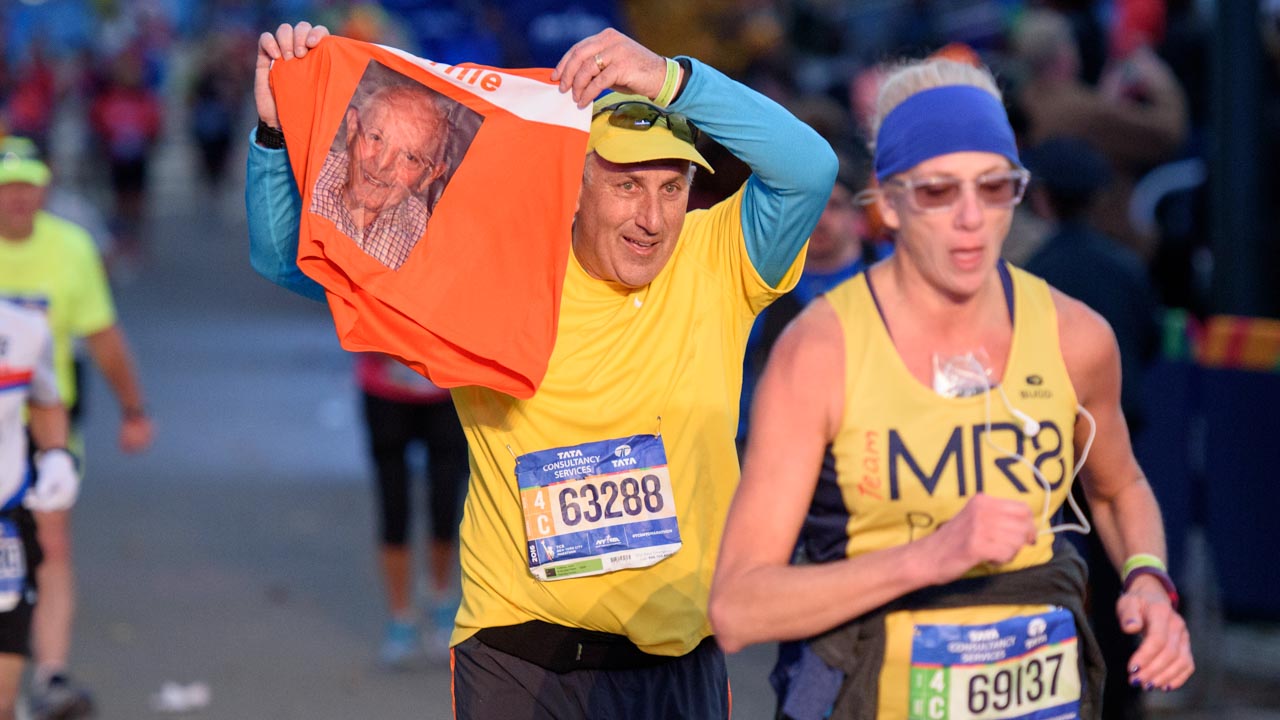 RUNNER: David Gutterman / Greensboro, North Carolina
"This is for my Uncle Bernie who has Alzheimer's. I'm just very proud to be running for him. I raised money to get into the marathon and I'm running in his honor -- great man, I love him. This was one of the hardest (marathons). I've run a number, but I got kind of injured around mile 15, so I kept holding my shirt out, I kept looking at his picture along the way, so that got me through it."
---------------------- 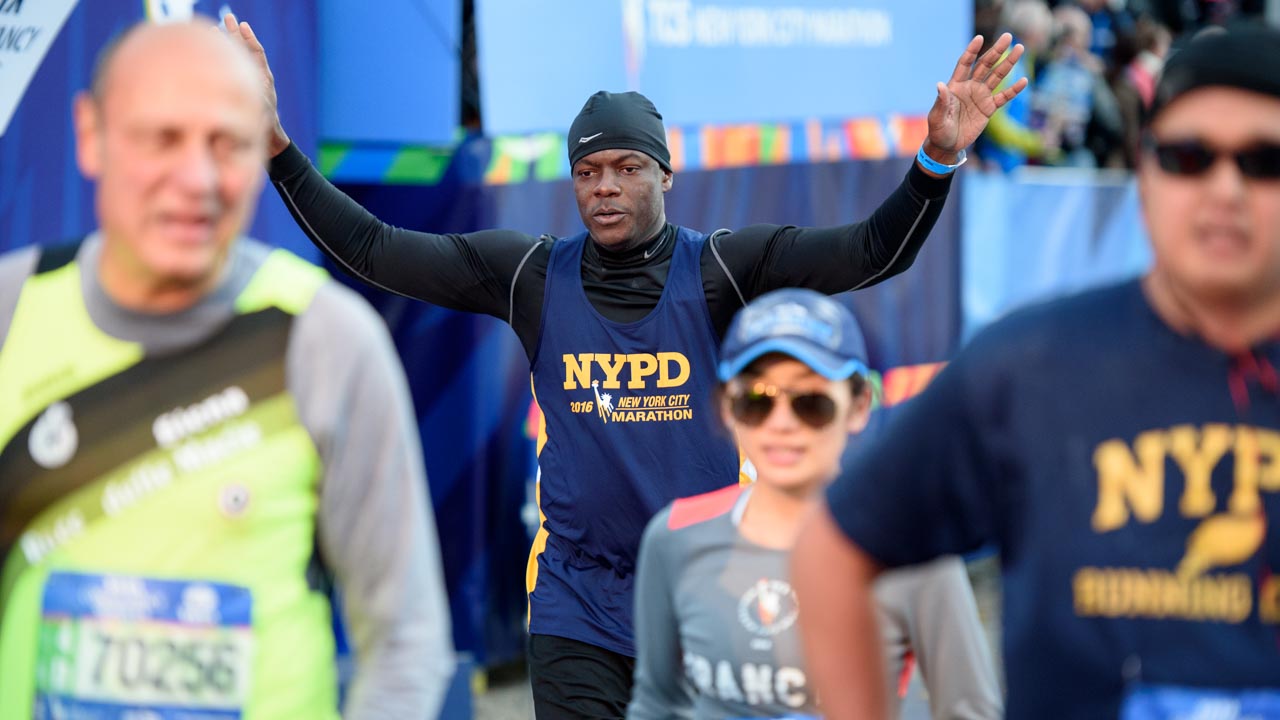 We are also sharing these stories on our Instagram feed using the hashtag #NYCMarathonStories. Simply post a photo of yourself with that hashtag if you want to share your story, too.
Related topics:
new york cityrunningmarathons2016 tcs new york city marathonphoto stories
Copyright © 2021 WABC-TV. All Rights Reserved.
2016 TCS NEW YORK CITY MARATHON
Find Your Finish on Demand! Watch runners crossing the finish line in the 2018 TCS New York City Marathon!
ABC7 is your home for the TCS New York City Marathon
West Point Marathon team
Countdown to the Starting Line: Part 1
TOP STORIES
NYC voters head to the polls, all eyes on mayoral race
What to know about voting in NYC's mayoral primary
NYC elections: What is ranked choice voting?
When will we know who wins NYC's mayoral primary? Maybe not until July
Here's why each of the 8 Democrats say they want to be mayor of NYC
AccuWeather: Rainy Tuesday after night of storm warnings
Golden Retriever Chunk, missing for 2 weeks, rescued from Barnegat Bay
Show More
Tourist punched, hit with bottle in unprovoked assault on subway
Man fatally shot in BMW over $3,000 chain in Upper Manhattan
COVID Updates: Cruise line reveals strict protocols for unvaccinated
Group of burglars steal 6 vehicles from Newark dealership
Man shot outside strip club in Queens
More TOP STORIES News