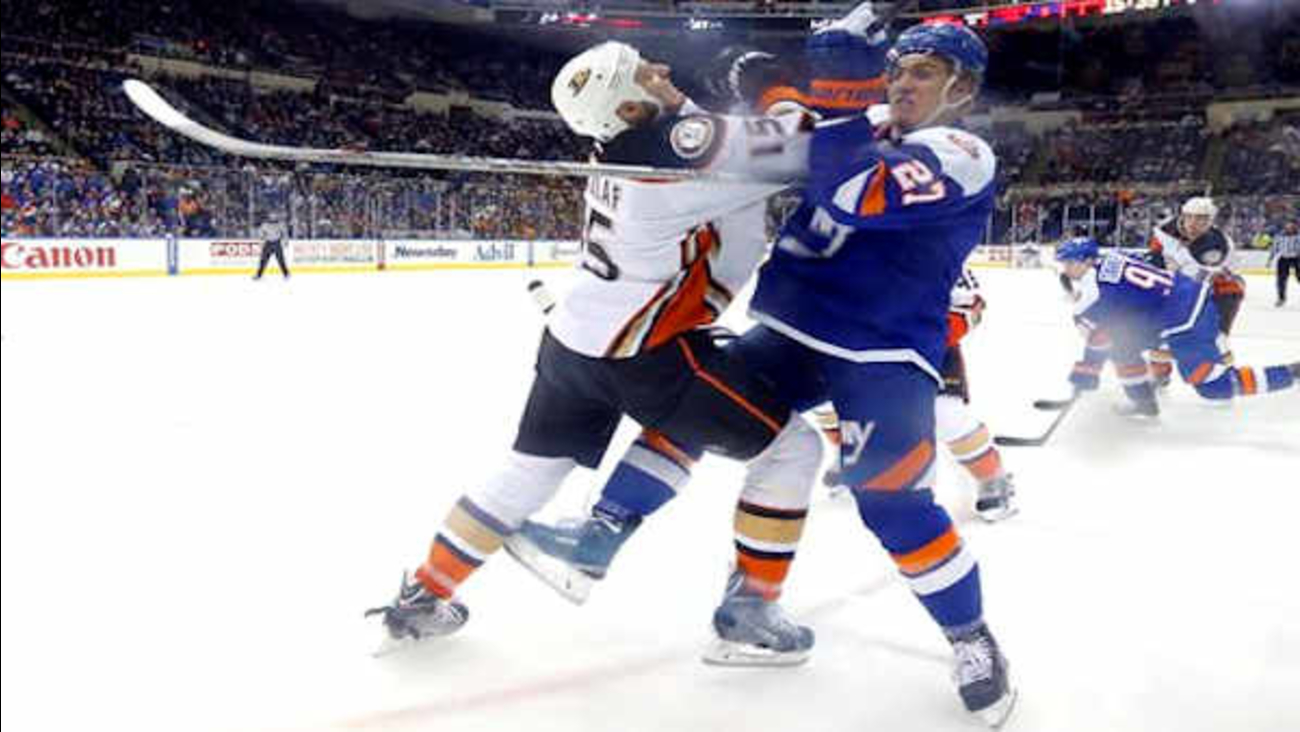 UNIONDALE -- The Anaheim Ducks had no idea their latest win put them into the Stanley Cup playoffs. They were just happy they have turned things around on their long Eastern trip.

Frederik Andersen made 29 saves, and the NHL-leading Ducks used a two-goal second period to beat the struggling New York Islanders 3-2 on Saturday.

"Oh, we clinched? I'm serious," Ducks coach Bruce Boudreau said. "I haven't mentioned anything to the players. We just want to keep going and progressing. If we do that, all the other stuff just falls into place."

Rickard Rakell gave the Ducks a 1-0 lead in the first, and Kyle Palmieri and Andrew Cogliano stretched the advantage in the second.

Anaheim, which leads the league with 103 points, secured its postseason spot minutes after Nashville became the first Western Conference team to get in.

"I wish it would, but no," captain Ryan Getzlaf said when asked if this takes any pressure off his club. "We were pretty well aware we were going to be in the playoffs at some point."

The Ducks started the trip - that ends Sunday at New Jersey - with losses at the New York Rangers and Columbus, and were outscored a combined 12-5, before they won in overtime at Boston on Thursday and followed it with Saturday's win.

"That might have been our best road game in a long time," Boudreau said.

Andersen was pulled after allowing four goals on seven shots in the loss to the Rangers and sat out against Columbus before backstopping the past two victories.

"You want to keep playing good," said Andersen, who has been splitting time with John Gibson. "You can't be satisfied with one game."

The Islanders will look to salvage a win on their four-game homestand Sunday against Detroit. New York is 0-6-1 in its past seven games at Nassau Coliseum and 2-6-2 in its last 10 overall.

Lubomir Visnovsky scored a first-period goal, Casey Cizikas cut the deficit to 3-2 with 5:36 left, and Michal Neuvirth stopped 21 shots but fell to 1-5 with the Islanders since being acquired from Buffalo.

The Ducks controlled play for much of the first, but despite the Islanders' latest slow start, Anaheim had only a 1-1 tie to show for its effort.

Patrick Maroon was originally credited with the first goal at 8:23 after a centering pass by Rakell bounded into the net off the stick of Islanders defenseman Nick Leddy. It was Rakell's eighth of the season.

The crowd at Nassau Coliseum got frustrated, and even booed when captain John Tavares turned over the puck in the neutral zone. It was only the most recent of several New York giveaways.

Tavares also flubbed a chance at a tap-in earlier in the frame.

"We're not playing as complete as we did before. We have to simplify," Tavares said. "It is hard to say why we aren't getting results. It's frustrating."

The Islanders regrouped and tied it with 2:52 left in the first when Visnovsky's drive from the left point caromed past Andersen after it hit the skate of Ducks defenseman Simon Despres.

Anaheim took over in the second, scoring twice on just seven shots and killing all four New York power plays, including a 5-on-3 advantage that lasted for 1:54.

The Ducks grabbed their second lead when Palmieri, a Long Island native, got to a loose puck in front, and with a backward sweeping motion knocked the puck past Neuvirth for his 14th goal.

Cizikas had a chance to get that one back when he was sprung for a breakaway with 11:07 left, but his shot went wide.

New York then went on its long two-man advantage when Matt Beleskey was sent off for tripping Tavares, and Cam Fowler followed him 6 seconds later when his clearing attempt sailed over the glass for a delay-of-game penalty.

Andersen turned aside Tavares with a glove deflection while falling forward and denied Ryan Strome, as well. The Islanders had four shots overall on their four second-period advantages, but their failure to score led to more boos.

"We did a pretty good job against a good team," Islanders coach Jack Capuano said. "As a team we have to be better."

The Ducks then built their lead to 3-1 when after another Islanders turnover in the neutral zone, Fowler sent Cogliano on a partial breakaway that he finished with a backhander past a sprawling Neuvirth.

NOTES: Visnovsky returned after missing four games due to a lower body injury. D Calvin de Haan was scratched. ... The Ducks were called for two delay-of-game infractions in second period. ... Since opening 17-4 at home, the Islanders are 6-10-1 there. ... New York, which wasn't penalized, dropped to 13-1-1 when it allows the first goal and scores the second.