AP
COMPTON, Calif. -- The Los Angeles Sheriff's Department acknowledged that a deputy shot and killed a black man who was mistakenly identified as a suspect in a carjacking, again bringing into question the appropriateness of a police agency's use of deadly force.

Donnell Thompson, 27, was shot at close range by a deputy riding in the turret of an armored vehicle, one of two dispatched as officers searched for suspects in Compton after a car chase and shootout. Police said the shooting occurred after Thompson ignored their commands and charged at them.

Hours before Thompson's family planned a news conference to charge that officers killed an innocent man, the department announced its investigation found "no evidence" Thompson was involved in the carjacking.

The finding provided little solace to the family, which believes the department and its officers overreacted after deputies were fired on during the chase, and that race was a factor.

"It's always in the news," said Thompson's sister, Matrice Stanley, referring to police shootings of blacks. "This is something that becomes common, which is really sad. Yes it is a factor."

She and other relatives attended a Los Angeles County Board of Supervisors meeting to draw attention to their brother's death. She described him as mentally diminished, kind-hearted, soft-spoken and someone who "would not have harmed a flea."

"I wouldn't treat an animal this bad," Stanley yelled at board members.

Fatal police shootings of black men have spawned anger and violence around the country, with protesters calling for an overhaul of policing tactics they believe unfairly target minorities in poor neighborhoods.

While tensions were high at the supervisors' meeting, there were no protests outside.

"We share that need for those very same answers," he said. "It is our hope that we can instill confidence and reassurance in that effort, and the investigation will be thorough and it will be complete."

"We're running this into the ground," he said. "No stone will be unturned."

The events that led to Thompson's death began unfolding around 2:30 a.m. on July 28 when deputies stopped a car and determined it was stolen. The suspect fled, plowing into a chain-link fence and driving through elementary school grounds as police pursued.

Shots were exchanged, and the car crashed. Deputies searched for a suspect, and about 2 hours later located a man hiding in a home.

Around the same time, a homeowner called 911 about a man lying in his small front yard. Katz said the man fit the general description of the man deputies reported seeing running from the vehicle: a black man between 20 and 30 years old wearing dark clothing.

A responding deputy reported finding Thompson lying on the ground with one hand concealed and what looked like a gun nearby, Katz said. Two armored cars were summoned from the home where the other suspect was arrested and were stationed on either side of Thompson, Katz said.

Thompson was unresponsive to repeated commands and a flash-bang device failed to generate a response from him. After deputies shot Thompson with two rubber bullets, Katz said he pushed up off the ground and charged toward the armored vehicle.

Katz said a deputy in the turret shot Thompson, fearing he had a weapon and was going to run past the armored vehicle and fire on deputies taking cover behind it.

Sheriff's Lt. John Corina said Thompson was shot several feet from the armored car. Deputies later determined Thompson was unarmed and nothing resembling a weapon was found in the yard.

A family spokeswoman said a neighbor who had captured dark footage of the shooting turned it over to the family and their attorneys, and that they were considering whether to release it.

Thompson family attorney Brian Dunn said he was filing a claim alleging civil rights abuse by the Sheriff's department and that it would be processed by Wednesday morning. He said he hopes to file a federal lawsuit on the family's behalf by mid-September.

Stanley, Thompson's sister, said she believes her brother didn't respond to deputies because he was afraid and didn't know what to do. She questioned why a deputy in an armored vehicle would need to use deadly force.

"He can't go through armored cars," she said, calling for the deputy to be fired.

"Why would SWAT and dogs and a number of people have to surround one man that was 130 pounds, 5'3" and kill him?" she added. "Even if he didn't respond that doesn't justify killing him. There's no reason for this."

Antoinette Brown, another sister of Thompson, demanded justice from the board of supervisors.

"My little brother was innocent," Brown said. "It hurts me to my heart to just imagine how he was we wrongfully killed that night. I just don't understand, and I want answers."

The deputy who fired at Thompson, a 20-year veteran, has been reassigned to duties not in the field. The department declined to release his name.

The department said an administrative review of the case was continuing and will be turned over to the district attorney for review when it's completed.

Patrisse Cullors, a co-founder of Black Lives Matter, called the shooting of black people a "state of emergency" and called on the Board of Supervisors to give Thompson's death their full attention.

Board Chair Hilda Solis offered her condolences to his family.

Since Thompson's death, the sheriff's department has been involved in two other shootings, including a fatal one involving an unarmed white homeless man on Aug. 2 that drew wide criticism. The man, 51-year-old William Bowers, was shot after fleeing from deputies on a bicycle in Castaic in northern Los Angeles County.
Related topics:
police chasesearchlos angeles county sheriff's departmentbarricadeshootingstolen cardeputy involved shootingcarjacking
Copyright © 2020 by The Associated Press. All Rights Reserved.
RELATED 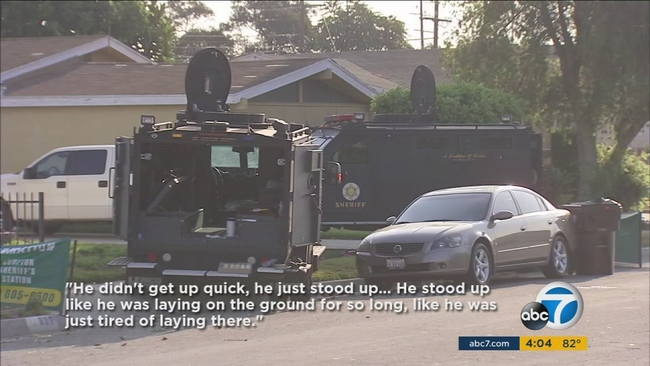 Deputies shoot, kill man amid search for suspect who fired at them in Compton
More Videos
From CNN Newsource affiliates
TOP STORIES