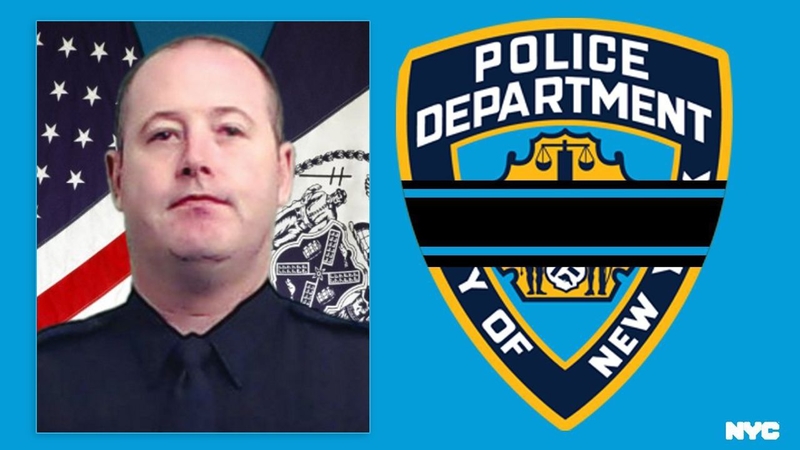 MORRIS PARK, Bronx (WABC) -- Bringing bouquets of flowers and lighting candles, a steady stream of people and police officers added to a growing memorial to Sergeant Paul Tuozzolo outside the 43 Precinct.

"Whenever there is a loss of life, especially due to violence, society loses as a whole, so I wanted to pay my respect," said Manny Mayo.

Officers from other precincts also came to pay their respects to the officers who worked with the sergeant. Pat Lynch, President of the P.B.A. described the mood inside as 'somber'.

"The woman and the men of the 43 rode with him, ate with him, changed with him, loved him then, love him now, and always will. It's awful somber in there, it's just knee-buckling sadness," said Lynch.

Sergeant Tuozzolo, a 19-year veteran was shot in the head and chest as he approached 35-year-old Manuel Rosales. A second sergeant, Emmanuel Kwo was shot in the leg. A 25-year-old police recruit on-field training then returned fire.

"He acted like he had years of experience rather than days of experience. When he saw a gun, he saw fellow police officers go down, his training kicked out, and he did a difficult, but professional job," Lynch added.

Rosales, according to police had earlier threatened his estranged wife with a gun at an apartment building, but fled before police arrived.

The deadly confrontation came after Sergeant Tuozzolo and Sergeant Kwo spotted Rosales, and boxed him in a short side street.

"He went out to help a woman that was in need, and he unfortunately was taken off this earth," adds Lynch.

As a tribute to that sacrifice, flags throughout the city were lowered to half-staff. Black bunting was also draped over the door of the 43 as mourners came to offer their condolences.

"It's very sad when something like this happens. We do have to be together, and show our respect," said Melba Morales.