WABC
By Lucy Yang
MELROSE, Bronx (WABC) -- For the first time, the family of a vendor viciously attacked by five men is speaking out.

53-year-old Souleymane Porgo is still fighting for his life.

Meantime, other street vendors, horrified over the senseless beating, have raised more than $30,000 for Porgo.

Vendors were back on E. 149th St. and 3rd Avenue in the Melrose section of the Bronx and extra patrols were visible.

"People really have no heart, or a pack of socks or bag, person's life can be taken away," said Lina Lockett, the victim's niece.

One Halal food vendor was just a few steps away from the beating. He tells Eyewitness News Porgo is a generous man. As someone didn't have money, Porgo would by the stranger a meal from this cart.

Last Wednesday, one man reportedly tried to steal a pocketbook from Porgo, who sold inexpensive merchandise. Porgo stopped the robbery.

But police say the man came back with four more men and pummeled the helpless vendor.

You can see one of the men eating while walking away in the video.

Shocked by the savage assault, the Street Vendor Project began a GoFundMe page which has raised with a $15,000 for the victim's medical bills.

"It's the least we could do. Always fight for vendors," said Cesar Boc, Street Vendor Project.

"I feel it's very generous. Didn't have to do that, but found it in the hearts to try and help out, nice," Lockett said.

The victim's sister told Eyewitness News exclusively, her brother is starting to open his eyes.

"We pray for him. Want him to be better," said Sefora Savadogo, the vicitm's sister.

Porgo's wife and two little girls were with him last Wednesday and witnessed the nightmare.

Detectives report two of the men seen in the surveillance video have criminal records.

So far there are no arrests. 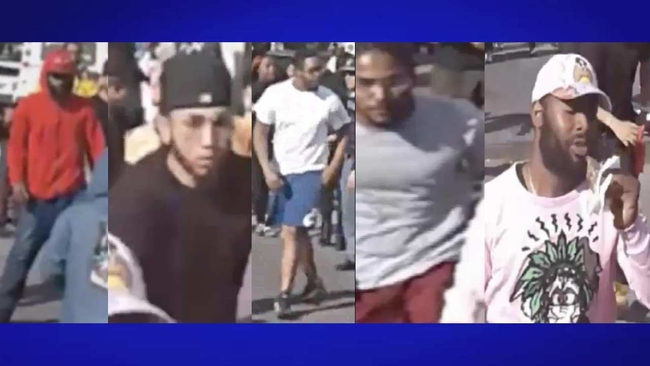