WABC
TARRYTOWN, New York (WABC) -- A federal investigation into the crane collapse on the Tappan Zee Bridge last year found that there were major problems with the equipment being used at the construction site.

The Occupational Safety and Health Administration (OSHA) released its report Thursday into the toppling last July of the 25-story crane that using a vibrating hammer to drive tube-like pilings into the Hudson River.

It was during that operation that the teeth-like clamp of the 60-ton hammer let go of the heavy piling.

OSHA inspectors found that the jawed teeth of the hammer's clamp were corroded on one side, and in addition, hydraulic hoses on the hammer were leaking.

That led to the hammer's unexpected release of the pile, which was followed by the crane's failure and collapse of the boom.

Inspectors also found that the crane's capacity was lower than the required safety guidelines for the piling operation.

OSHA cited the contractor, Tappan Zee Constructors, with a serious violation and a nearly $13,000 fine. 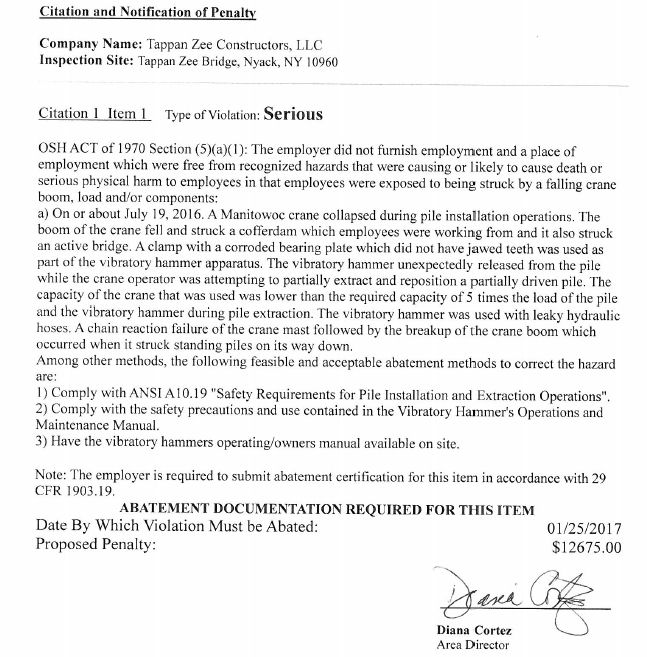 The violation does not mention any findings concerning operation error, but focuses on the faulty vibratory hammer.

There were no serious injuries when the crane collapsed, but criticism and questions followed as to whether contractors weighed the risks of positioning such a massive crane so close to one of the nation's busiest bridges.