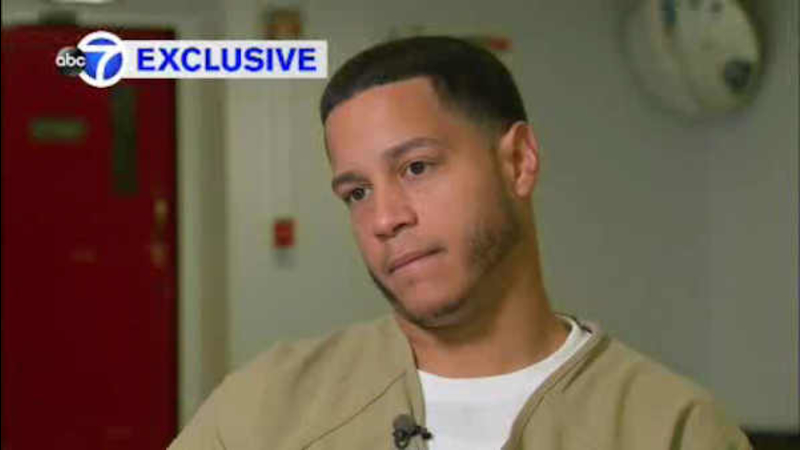 NEW YORK (WABC) -- In an Eyewitness News exclusive, a suspect in a deadly house explosion in the Bronx is speaking out from prison.

Julio Salcedo is accused of running a marijuana grow house, which led to the blast.

FDNY Deputy Chief Michael Fahy was killed. But now the suspect claims he didn't even know about the operation.

Salcedo says he was renting a room on the first floor and had no idea what was going on behind the locked doors upstairs.

He's had past run-ins with the police but his last conviction, which was for car theft, occurred ten years ago.

He says his life was back on track as a successful car salesman until the house he was living in exploded.

Facing a possible 25 years in prison, Julio Salcedo sat down for an interview at a jail in the Bronx not far from where the pot grow house he's accused of operating blew up and killed Fire Chief Michael Fahy.

Jim Hoffer: "Police and D-A say you are responsible for the death of Chief Fahy?"
Julia Salcedo: "I'm getting blamed for something I didn't do, somebody else should be blamed for that."

The 34-year-old car sales manager says he was in his first-floor room getting ready for work the morning of the explosion when fire fighters knocked on the door.

"They asked me if anyone else was in the house," said Salcedo. "I said I didn't know. They told me to go outside. The Chief asked for my name. I gave my full name. He told me go over there and then I just left."

He says if he were running an illegal grow house, he would have never given his full name nor he claims did he ever flee the scene as initially reported. He evacuated as he says he was told to do by Chief Fahy.

Salcedo knows firefighters blame him for Fahy's death. He insists he's innocent and that the police have mistakenly accused him because he happened to live there.

He says he only went there to sleep because he worked six to seven days a week as a manager at a Bronx car dealership.

Jim Hoffer: "Why should we believe you had nothing to do with the grow house?"
Julio Salcedo: "Because I work 80 hours a week, I'm never home. Every time I came out of work, it was bedtime. I have to be focused on my job."

His boss backs that up, telling us Salcedo worked 12 to 14 hours a day.

Jim Hoffer: "He was a hard worker?"
Supervisor George Ballas: "Yes".
Jim Hoffer: "You trust him?"
George Ballas: "Of course, He didn't have time for much else. That's it. Look at me, when I go home time to go to sleep, back to work. There's no time in the car business, none whatsoever."

The indictment alleges Salcedo, who has a past conviction for car theft, ran the grow house along with Garivaldi Castillo, basically business partners that acted in concert with each other.

The Bronx District Attorney's Office says "they can't comment on existing case," but added, "we have our case that we will put forth in court and he (Salcedo) has his."

Salcedo remains behind bars without bail on felony assault and pot possession charges. He says since police had the pot house under surveillance for weeks, why did they wait until someone was killed to arrest him?

Jim Hoffer: "Why should we believe you?"
Julio Salcedo: "Because I'm innocent, I didn't do it. They were watching me a long time, I told them if watching me, why never arrest me. You had three weeks, so why not arrest me. If you have something to arrest me with marijuana charges, you should have done your job right."

Salcedo claims he made good money selling luxury cars and would have never risked throwing all of that away for pot.

The car dealership confirms he made six figures.

He's back in court in two weeks when his attorney tells us, she will push to get him released on bail.