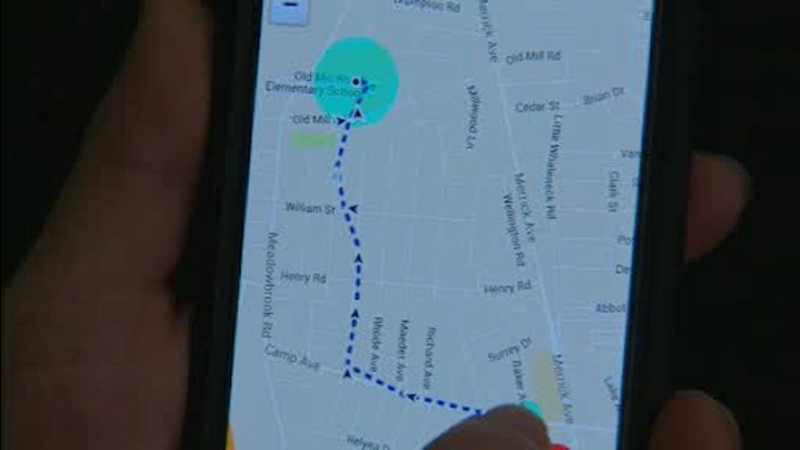 MERRICK, N.Y. (WABC) -- It was just more than two years ago that Avonte Oquendo walked out of his school in Queens.

The body of the 14-year-old who had autism was found months later in the East River.

Now, a mother in Nassau County is using GPS to track her children who have special needs.

"I haven't slept in my own bed for about the past four years because I'm so terrified he's going to run off and I'm not going to hear him in time," said Dayann McDonough, a Merrick resident.

It's not just 8-year-old Donovan that Dayann has to worry about.

Her 10-year-old son Douglass also has autism and has a tendency to run away.

"You can have an alarm and all that's going to do is let you know your child left but not where your child is," Dayann said.

But now her kids wear a GPS device that not only tells McDonough and her husband where the boys are but it tracks them.

"The bus went down and dropped him off at school," Dayann said.

It sends the parents alerts. It's called "Angel Sense".

"I'll be at work. I'll get a text. Douglass just left home and then you go on the app and it says Douglass is in transit, and then you get another alert Douglass arrived at school," said Brian McDonough, the boys' father.

"Right now he's at school, so we can click on school and it shows Old Mill Road," Brian said. "If he steps out of that circle we get an alert, Douglass just left school."

But let's say you're in a place which doesn't have great cell service and the GPS doesn't work.

The device has what's called a "listen in" feature. The parent can actually listen to where the child is or who they're with.

The device can only be removed from the child's clothing by a magnetic key which only the parent has.

"Because you know your parents can find you?" Eyewitness News said.