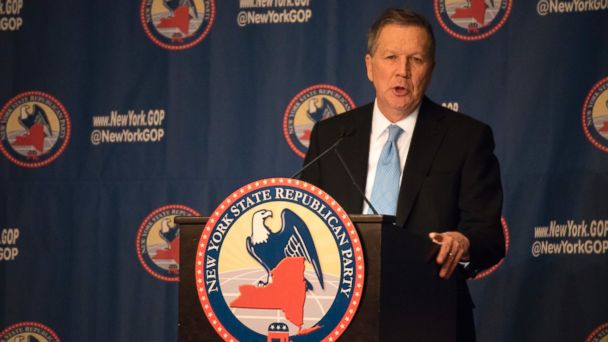 Republican presidential hopeful John Kasich today told a female college student concerned about "sexual violence, harassment and rape" that she should not "go to parties where there's a lot of alcohol."

The first-year student asked Kasich at a town hall in Watertown, New York, what he would "do in office as president to help me feel safer and more secure regarding sexual violence, harassment, and rape?"

Kasich, the governor of Ohio, spoke about empowering victims by ensuring access to confidential reporting and rape kits. "You ought to absolutely know that if something happens to you along the lines of sexual harassment or whatever," he said.

"You have a place to go where there is a confidential reporting, where there is an ability for you to access a rape kit, where that is kept confidential, but where it gives you the opportunity to be able to pursue justice, after you have had some time to reflect on it all."

He said he wanted to extend the changes that have been made at Ohio's higher education institutions to the entire country. "Our coeds [female students] know exactly what the rules are, what the opportunities are, what the confidential polices are, so that you are not vulnerable, at risk, and can be preyed upon," Kasich said. "I have two 16-year-old daughters, and I don't even like to think about it."

The student, who said she studied at St. Lawrence University in Canton, New York, replied, "It's sad, but it's something that I have to worry about."

"Well, I would give you -- I'd also give you one bit of advice," Kasich replied. "Don't go to parties where there's a lot of alcohol."

Democrats pounced on Kasich's response. "Republican presidential candidates like John Kasich and Donald Trump are insulting women everyday [sic.] on the campaign trail by blaming victims of sexual and domestic violence," a spokeswoman for the Democratic National Committee, Christina Freundlich, said in a statement.

Kasich's campaign defended his record in a series of tweets this afternoon, following an onslaught of criticism. "Only one person is at fault in a sexual assault, and that's the assailant," his campaign tweeted from his Twitter account.

A spokeswoman for the National Sexual Violence Resource Center, a group that works to prevent and respond to sexual violence, said Kasich's answer has "some of the right elements."

"The reality is that sexual violence, particularly on campuses, there is a correlation with alcohol," the spokeswoman, Kristen Houser, told ABC News. "We know that offenders use drugs and alcohol strategically."

She said Kasich had a solid track record of helping victims of sexual violence in Ohio and that it was "too bad he didn't slow down" with his answer. He did not tie the elements of his response together in a holistic way, she said, instead focusing mainly on the criminal justice response to sexual violence.

"I think what really happened here is he went to the same place that most of America goes to," Houser said.