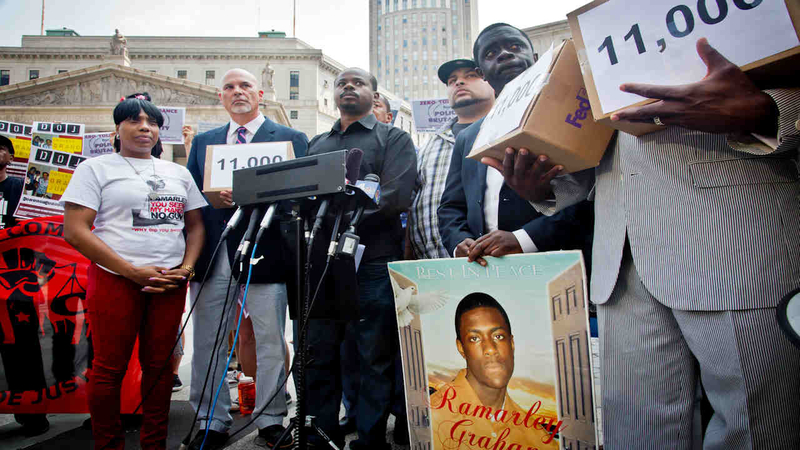 NEW YORK -- The parents of an unarmed black teenager killed by a white police officer four years ago Tuesday rallied at City Hall to demand the city fire the patrolman.

Ramarley Graham was 18 when he was shot once in the bathroom of his Bronx home by an officer who had barged inside during a drug investigation. He was killed in front of his grandmother and 6-year-old brother.

Malcolm said all the officers involved that day should be removed from the force.

"They don't belong in our community," she said.

The two delivered a letter for Mayor Bill de Blasio and his wife, Chirlane McCray, saying they were appealing to them as fellow parents.

"There has been no explanation, no justice, no morality, and thus no sense of legitimacy," said the letter, according to a copy obtained by The Associated Press. "It is sickening for any penny of our tax dollars - or any New Yorkers' for that matter - to be received by any of the officers who were responsible for the murder of our son, and the cover-up."

Mayoral spokeswoman Monica Klein called Graham's death "a tragedy," adding that de Blasio is committed to improving the relationship between the police and the community.

Last year, the family settled a lawsuit against the city for $3.9 million.

The parents were joined by several dozen protesters and Eric Garner's mother, Gwen Carr, who called the officers "bad apples."

"We need justice for all our young black men," said Carr, whose son was killed in a police chokehold during an encounter caught on video.

The officer who shot Graham, Richard Haste, was initially indicted in the Bronx on a state manslaughter charge, but a judge dismissed the case after determining that prosecutors improperly instructed grand jurors. A new grand jury cleared the officer.

After the shooting, Haste was stripped of his badge and gun and assigned to the department's fleet services division, officials said, but an internal disciplinary proceeding against him has been on hold pending the outcome of a federal investigation. In that time, Haste has received raises guaranteed by his union contract.

Haste has said in a court filing that he fired because he believed Graham had a gun and was about to shoot. No weapon was ever found.

"We are a nation and city of laws where justice demands that an individual is innocent unless proven guilty in a court of law," said Patrick Lynch, president of the Patrolmen's Benevolent Association, which represents Haste. "Regardless of the facts in this case, a family lost a loved one and they have our sympathy, but grief and emotion can never override due process."

In New York, the mayor doesn't have the power to summarily fire police officers. Disciplinary matters are adjudicated in an internal police process, and the commissioner has the ultimate say in an officer's fate.