WABC
By Eyewitness News
PATERSON, New Jersey (WABC) -- Two city pools in Paterson, New Jersey, will stay open for the summer, but summer camps are set to end halfway through August this year due to budget cuts.

The pools were set to close early because of a budget deadlock, but the city decided to reallocate the money from the home heating program to keep them open.

Assemblyman Benjie Wimberly, who is also the city's recreation director, posted on Facebook page that 36 programs will be canceled early due to a "budget impasse with the City Council."
However, city recreation summer and sports camps, fitness and boxing programs, recreation department community programs, are scheduled to be discontinued August 12, which is two weeks earlier than usual. It would also mean the last day of employment for summer camp and recreation staff members.

Wimberly said that the recreation department's constraints "combined with almost $85 million recently cut in the Paterson Public Schools budget is a formula for disaster for our children and Community."

One pool had 900 kids in attendance last Friday, and children told Eyewitness News that they dream about swimming all winter long.

Brothers Jayden and Omar Brown spend their days at a free camp at the Lou Costello Municipal Pool.

"It means a lot to me," Jayden said. "I've been here over five years."

"My dad taught me how to swim when I was 3 in this pool," Omar added.

Dad Kalien Brown, who worked at the same pool growing up, said the early closings will put hundreds of families in a tight spot.

"You gotta pay a babysitter, and financially right now I don't have it," he said. "And this is free."
Mayor Joey Torres released a statement last week suggesting that impasse has prevented the city from collecting tax revenues, creating a cash flow problem and hindering the ability to pay for vital operational services.

Recreational program employee Brianna Blue and her grandmother Katrina Alexander will lose out on their paychecks, but they're more worried about the children.

"They have no where to go," Alexander said. "Point blank, there is no where for them to go. And for the city to do this to these children, it's sad. It's really sad."
Related topics:
new jerseypatersonbudgetbudget cutsnew jersey news
Copyright © 2020 WABC-TV. All Rights Reserved.
RELATED 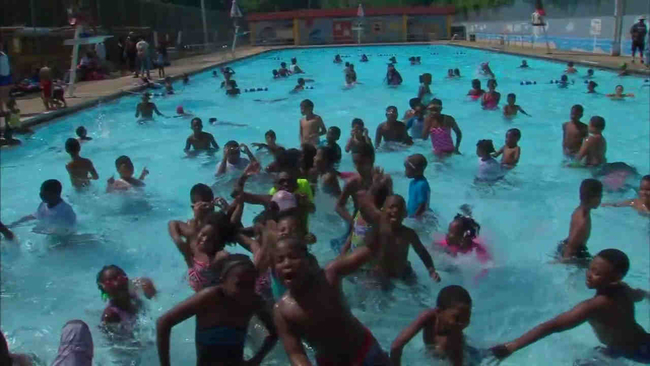