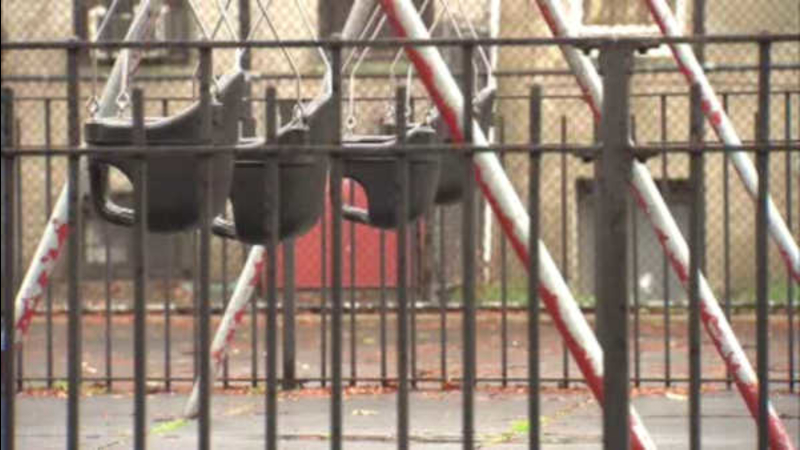 4 in custody in connection with Brownsville gang rape

BROWNSVILLE, Brooklyn (WABC) -- Police say four teens, ranging from 14-18 years old are in custody in connection with the gang rape of another teen at a playground in Brownsville. One suspect still remains on the loose.

Police released surveillance video of the gang consisting of five men entering a nearby bodega before Thursday night's attack.

Police say the 18-year-old was walking with her father near Osborn Playground in Brownsville on Thursday night. Five men walked up, pointed a gun, and told the man to leave. The father tells Eyewitness News that he had no choice but to leave his daughter in the park surrounded by the men. What allegedly happened next is unsettling, but some say had it unfolded in different parts of the city, it would have been handled differently.

"The one put a gun in my face telling me to run, and all of them had their way with her," said the teen's father, who is is not being identified.

The father tells Eyewitness News he was with his daughter near the handball court having a drink when the men approached. When one pulled out a gun and told him to run, he felt he had no choice. He says he felt that if he stood there and fought, he would have died.

The man did not have a cell phone, and ran not too far to a nearby bodega begging for help, but they wouldn't call police. The victim tells Eyewitness News that she did scream for help, and was scared when her dad left her.

The father then ran and told police, but by the time officers arrived on the scene 15 minutes later, the suspects were gone.

Borough Eric Adams sharply criticized police for what he says was an 'unacceptable' delay in getting vital information to the Brooklyn community.

Sources tell Eyewitness News in the hours and days following the alleged rape, detectives did interview the victim at length, and canvassed the neighborhood looking for possible suspects. They say when they found the surveillance video, they immediately released it.