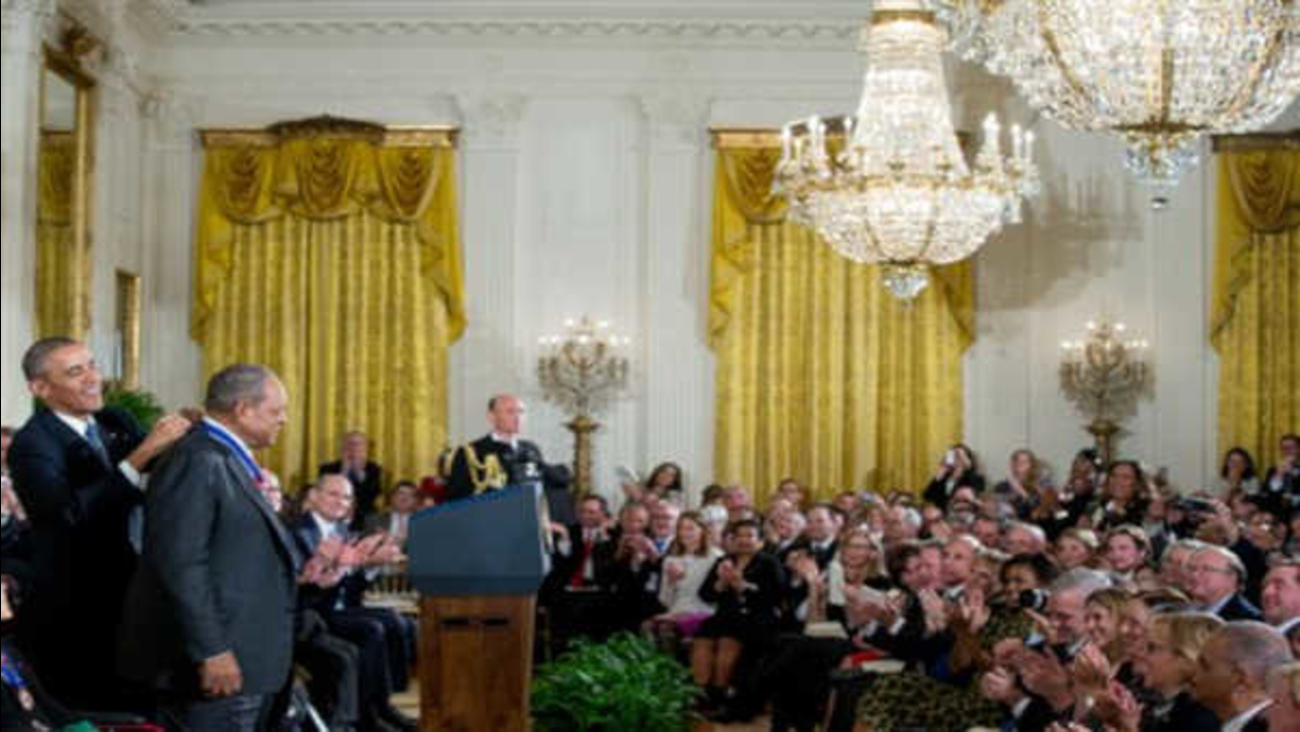 President Barack Obama awards Willie Mays the Presidential Medal of Freedom, Tuesday, Nov. 24, 2015, during a ceremony in the East Room at the White House in Washington. (Andrew Harnik)

President Barack Obama recognized 17 Americans with the nation's highest civilian award on Tuesday, including the first African-American woman elected to Congress, one of the greatest catchers in baseball history and a "Funny Girl."

"Today we celebrate some extraordinary people: innovators, artists and leaders who contribute to America's strength as a nation," Obama said.

The sports honorees were Baseball Hall of Famers Willie Mays and Yogi Berra. Berra, who died in September, was a famed Yankees' catcher, an 18-time All-Star and 10-time World Series champion. The president noted that Berra also served in World War II. Mays was among the first African-American players in Major League Baseball.

"It's because of giants like Willie that someone like me could even think about running for president," Obama said.

The politicians bestowed the honor are Democrats: Sen. Barbara Mikulski of Maryland, who has championed equal pay and women's health during her 44 years of public service; former Rep. Lee Hamilton from Indiana, a longtime advocate of American national security and international relations; and the late Rep. Shirley Chisholm from New York. Chisholm was the first African-American woman elected to Congress and a founding member of what would become the Congressional Black Caucus.

Of Hamilton, Obama said he helped guide the nation through the Cold War and had a consistent commitment to bipartisanship.

Obama spoke about each recipient; among the other honorees were:

-Bonnie Carroll, a veterans advocate, who founded the Tragedy Assistance Program for Survivors (TAPS) to support families and loved ones of military heroes killed during their service.

-Katherine G. Johnson, a NASA mathematician, whose calculations influenced every major space program, including the flight of the first American into space.

-William Ruckelshaus, a former chief of the Environmental Protection Agency, who shaped the guiding principles of the agency, including a nationwide ban on the pesticide DDT and an agreement with the automobile industry to require catalytic converters to reduce automobile pollution.