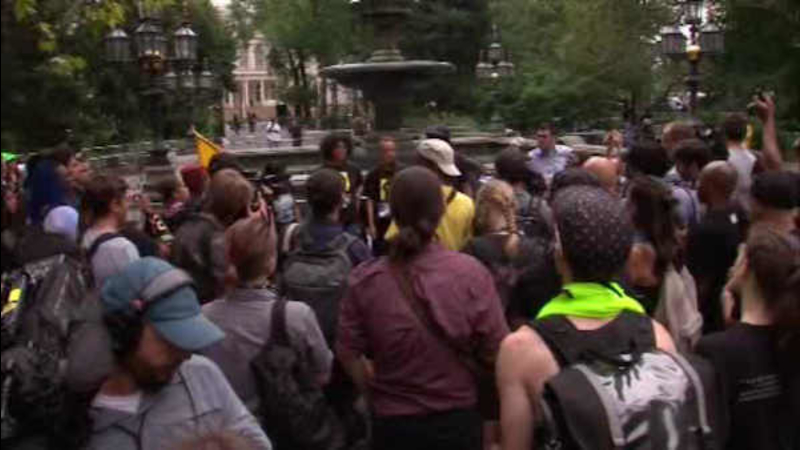 About 100 members of the group "Millions March NYC" went to the southern tip of City Hall Park to push for greater police accountability.

They are calling for the removal of Bratton and his 'Broken Windows' policy, aimed at cracking down on low level crimes as a way to prevent more serious crime in urban neighborhoods.

It is part of the platform being pushed by the Black Lives Matter movement.

Last month the group protested at PBA headquarters in Lower Manhattan, where many chained themselves to the building saying the union protects officers who shoot black people.

The group is calling for an end to the death penalty and mass incarcerations, as well as defunding the NYPD budget of $5.5 billion and using that money to invest in black communities.

They also want reparations for the victims of police brutality and their families.

The protest, aimed at shutting down City Hall Park, is one of series of actions being held Monday by organizations around the country,

The protests have been criticized by many after the shootings of five police officers in Dallas who were on detail during a Black Lives Matter when they were the target of an assassin.

The NYPD put up barricades around City Hall and inside City Hall Park in preparation for the protest.

The group said it plans to stay until their demands are met.