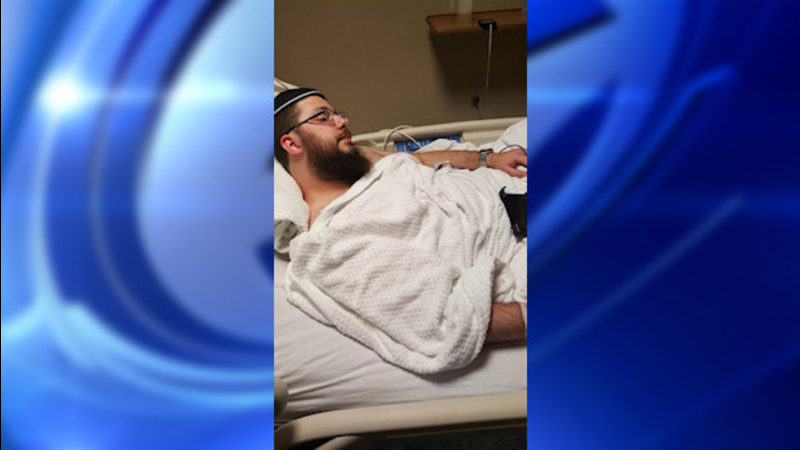 CROWN HEIGHTS, N.Y. (WABC) -- Police are searching for the slasher who ambushed an EMS worker in Brooklyn Tuesday night.

The EMS worker with Hatzalah, the Orthodox Jewish first aid squad, is in stable condition after the stabbing. According to his family, he will be released from Kings County Hospital and is expected to make a full recovery.

Just before 8:30 p.m. Tuesday at Eastern Parkway and Rogers Avenue, the medic, 34, who off duty and not wearing his uniform, was able to call for help on his radio.

Cell phone video captured the chaotic scene as the victim, with Crown Heights Hatzalah, was treated in the back of an ambulance.

Fellow volunteers rushed him to the hospital. Detectives say he had just left evening prayers when he was attacked.

Police confirmed that the man approached the victim from behind and slashed him in the upper right back with no warning and without a word, before running away.

Eyewitness News has learned that the victim has a 4-inch stab wound to the right upper back, that the knife cut into his lung cavity but did not penetrate the lung, and he told police the suspect said nothing before, during or after the attack.

Police scoured the block of Eastern Parkway for a weapon. Investigators are searching for the motive. The suspect is described as wearing a black hoodie and a Halloween mask.

"I saw flying lights and sirens and I saw the guy was stabbed, and then I saw police arrive a second later," said Isaac Landau, an eyewitness.

Investigators believe the victim did not know his attacker. Some wondered if the victim was targeted because he is Jewish.

"With the stabbings that are taking place in Israel, we cannot be relaxed when you investigate something of this magnitude, we need to determine if it is a hate crime, and we need to use all the video footage and whatever we can to apprehend the person," said Eric Adams, Brooklyn borough president.

The attack is being investigated as a bias crime because detectives say there is no other obvious motive. The investigation continues with numerous NYPD agencies involved, including counterterrorism and intelligence.

Community leaders are urging residents in the area to be extremely careful because the suspect remains at large.

Crown Heights is home to the ultra-Orthodox Jews of the Lubavitcher sect, still badly shaken over an attack late last year.

A man with a history of mental illness was shot to death by police after he stabbed a worshipper inside the Lubavitcher synagogue.

Adams urged witnesses to the latest attack to come forward.

The Anti-Defamation League announced Wednesday that it is offering a $5,000 reward for information leading to the arrest and conviction of anyone responsible for the slashing.
Related topics:
crown heightsnew york citystabbingambulance
Copyright © 2021 WABC-TV. All Rights Reserved.
TOP STORIES
How NYC and the Tri-State are celebrating Juneteenth
George Floyd statue unveiled in Brooklyn
AccuWeather: Humid with PM storm, air quality alert issued for Long Island
Will NYC, Tri-State area be impacted by Tropical Storm Claudette?
Wife of man killed by Honolulu police: 'If it was me, I'd still be alive'
Buyers lining up to check out 'house from hell' listed for nearly $600K
Biden family dog Champ dies
Show More
Candidates make final pushes ahead of NYC mayoral primary
What to know about voting in NYC's mayoral primary
NYC elections: What is ranked choice voting?
CT aquarium to auction off chance to name 3 beluga whales
Kids dive for cover as gunman opens fire on NYC sidewalk
More TOP STORIES News