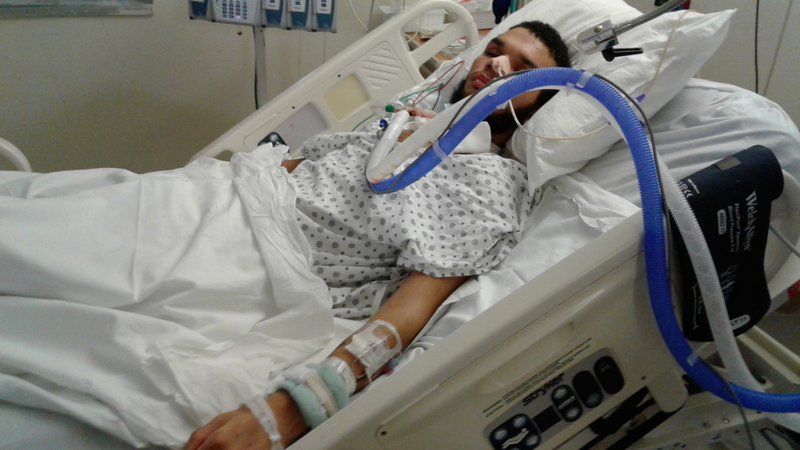 QUEENS (WABC) -- The family of a Rikers Island inmate who tried to take his own life is speaking out after four correction officers were suspended to failing to immediately intervene.

Eighteen-year-old Nicholas Feliciano is lying in a Queens hospital suffering from brain damage, and his family believes the guards could've prevented the entire thing.

"It scares me that I'm going to lose him and that he won't be the same," grandmother Madeline Feliciano said.

His family members claim three guards and a captain watched and did nothing for up to seven minutes as Feliciano tried to hang himself in a cell.

"It hurts deeply in my heart to know that these officers just seen him there for seven minutes and didn't react, didn't help him," Madeline Feliciano said.

Police arrested Nicholas Feliciano on a parole violation and sent him to Rikers. He reportedly got into a fight at the jail and was moved out of general population on the day he tried to take his life.

His family members say the teenager had a history of depression and mental illness and shouldn't have been sent to Rikers in the first place.

The officers were suspended while the Department of Corrections investigates.

The family's attorney says what happened shows a systemic problem inside the facility.

Union officials for the prison have adamantly denied the allegations and said surveillance videos -- which aren't being released -- will help paint a picture of what really happened.

"The claims being made here are extremely troubling and we are taking them seriously. The safety and well-being of those in our custody is our number one priority and an investigation into this incident is underway. Three officers and one captain have already been suspended and if the outcome of the investigation warrants we will take appropriate disciplinary action up to and including termination. We have referred this case to the city's Department of Investigation which is conducting an independent inquiry."

After his suicide attempt, the state Department of Corrections lifted the parole warrant, which allowed the city to remove their security detail from the hospital and the family to have open access to him.