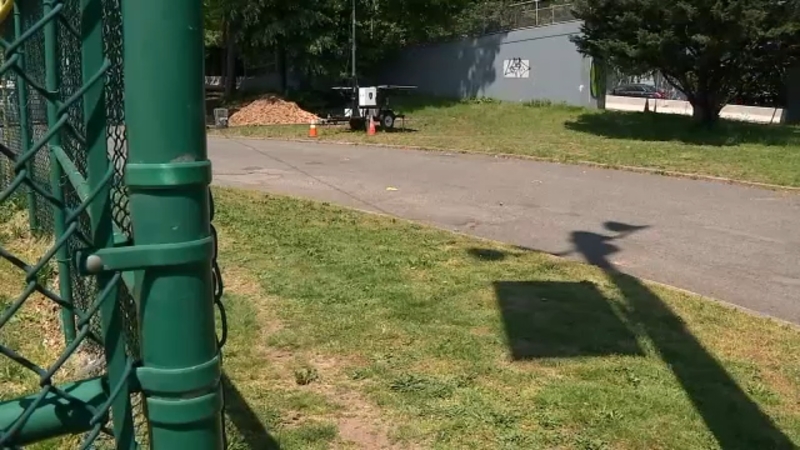 PATERSON, New Jersey (WABC) -- The mayor of one of New Jersey's largest cities is vowing a crackdown on crime after a broad daylight double shooting in a popular park with children around.

"I'm bothered by any shooting that takes place in our city, but what took place last night really made me mad," he said. "It made us all mad. The last place any shooting should take place is at a park, a park adjacent to a residential neighborhood. That's why we have to take a zero tolerance approach."

Police took the suspect, 46-year-old Iris Tolentino, to the hospital for a mental health screening.

The kids who were practicing on the field when the shooting occurred were between 8 and 11 years old, and officials say in the past, the violence around the fields has been so frightening that opposing teams have packed up and left.

Sayegh also discussed measures that will be taken to protect the surrounding community.

Sayegh described Eastside Park as a "crown jewel" of the city, and that the recent violence as shocking.

"When I got that call yesterday, I was beside myself," he said. "It was almost surreal."

He said that surveillance cameras were being added and that there would be more visible police patrols.

"We're going to get more aggressive in our measures," he said. "Last month, a joint operation led to the arrests of 22 gang members. That was just the beginning. We're coming for you."

The city of Paterson is planning to erect a plot of land into a fitness zone as people look to get active outdoors amid the pandemic.

It was the 44th shooting in Paterson this year. It took until July to reach that number last year, so officials are focusing on gun violence.

No arrests have been made in the park shooting, and the investigation is active and ongoing.

The Passaic County Prosecutor's Office asks anyone with additional information about this incident to contact us on our tips line at 1-877-370-PCPO or tips@passaiccountynj.org or contact the Paterson Police Ceasefire Unit at 973-321-1342.