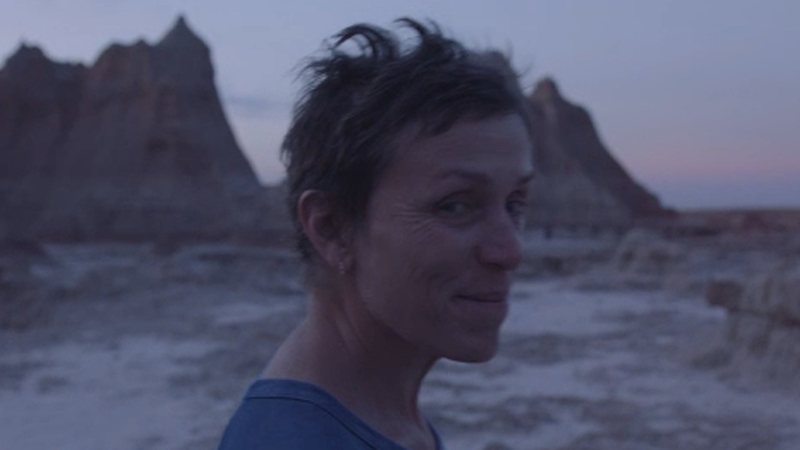 NEW YORK -- A film now streaming on Hulu is generating serious Oscar buzz, and entertainment reporter Sandy Kenyon says it's one of the year's best.

"Nomadland" has earned top prize at film festivals in Berlin and Toronto, and the movie has four nominations going into next weekend's Golden Globe Awards.

It's almost guaranteed to be nominated as Best Picture when Oscar nominations are announced on March 15, and "Variety" has dubbed it the favorite to win the top prize.

The on-the-road movie's pace is leisurely, and the performance by Frances McDormand is often silent. But if you're patient, this film will reward you.
ALSO READ | Music producer finds second act as B&B innkeeper
EMBED More News Videos

Sandy Kenyon has more on a bed and breakfast in Massachusetts run by rock producer Tom Werman.

Not a whole lot happens in "Nomadland," but much is revealed, most especially on McDormand's remarkably expressive face.

"I live in there," says her character, Fern, about the ancient van she uses to travel the American West. "It's my home."

First, Fern's husband lost his mining job, and then she lost him.

The audience meets her after his death, when she is told by a clerk that she "may want to consider early retirement."

She replies simply, "I need work. I like to work."

The work that's available in an Amazon warehouse is mind-numbing and only seasonal, so Fern hits the road and finds a group of fellow travelers.

Claudia Conway grew up watching "American Idol" in Alpine, New Jersey, and calls the chance to audition for the show, "a life changing experience."

What these nomads are doing is not that different from what the pioneers did, and McDormand's character is a composite of the real-life nomads author Jessica Bruder interviewed for her book, "Nomadland: Surviving America in the Twenty-First Century."

It's about living on the road full time, trying to find a way to survive. There are people who have chosen another way to live that most of society wouldn't understand.

Plenty of these real people appear onscreen as McDormand's co-stars, and the decision to use them is among many choices director Chloe Zhao has made to make her film sublime.

"Nomadland" can't be called a celebration of what seems to be a harsh life, but like her character, we find meaning in the course of a journey most of us will never take.

We find understanding, too.

Fern's perseverance will inspire you, and the performances of the nomads who are not actors will surprise you. It is a look inside a culture many people don't even know exists.

"Nomadland" is streaming on Hulu, owned by the same parent company as this ABC station.